Opening a new window for your navigation or other button elements is only the tip of the iceberg when it comes to working with multiple windows. It is possible in FileMaker 8 to strictly control multiple windowstheir positions, sizes, and titles.

The simple nuts and bolts of these features can be found in the New Window script step options. With them you can create new windows, close windows, select (bring to front) a specific window by name, adjust and resize windows, tile and cascade multiple windows at once, and control the availability of the Status Area as well.

Figure 13.5 shows a simple example of the script options for the New Window script step.

Figure 13.5. This 400-pixel by 300-pixel window opens with a title of My Window and is positioned in the upper left of the screen. 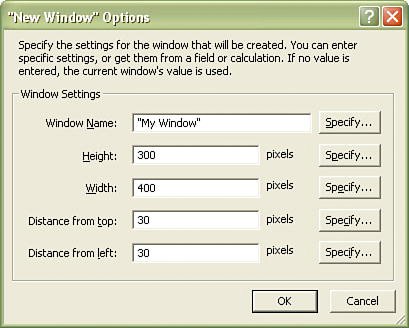 The possible uses for multiple windows are quite varied:

The possible list is virtually endless. What we will present in the following sections are some common examples that should serve to demonstrate the mechanics of working with multiple windows.

As discussed previously, it's possible to build a palette for navigation, functions, or any number of options for buttons in your solution. For example, you might want to present your users with a new window containing a portal of all the possible reports in their database solutionsthat also open in their own individual windows. Another idea might be to have a central control panel that allows you as a developer to unlock certain layouts, run test scripts, re-log in, view internal field data, and so on.

The only drawback to this approach is that users need to click twice to perform button actions: once to bring the window forward, into an active state, and a second time to click the chosen button.

From an implementation standpoint, this functionality is simple to deliver: Create a layout with all of your various button or control objects on it and write a script to open this window and tie it to your startup routine.

Modal dialogswindows that stay open in the foreground while waiting for some action to be performed by the userare a common user interface standard that users will find familiar. Certainly the Show Custom Dialog script step will take care of some of your basic needs, but in cases in which you'd like to control the look and feel of a dialog or need more than three simple text-entry fields, you will need to turn to crafting your own window dialogs.

This technique is entirely driven by scripts. You are free to build whatever type of layout and window you'd like. The only stipulation here is that you give users a means of continuing with the process after you've brought them to a modal dialog (a Close button, for example). Your database will be in a paused state, waiting for user input. More often than not, resuming from this state is accomplished with a Continue button or, with a bit more scripting, Submit and Cancel buttons.

Cancel buttons imply that whatever action the user has taken in the modal dialog window can be undone. That can be problematic (especially if you've allowed the user to add and remove records from a portal), so be careful with the use of that term. One technique for managing the undo process is to use global fields for data entry and to populate true fields only when the user clicks Submit. Other techniques involve record-level rollbacks. (A rollback essentially undoes a transaction in a database, returning it to a previous state.)

It's important to disallow user abort; otherwise, users can close your window without performing the action you're attempting to require. It's also a good idea to lock the Status Area. Finally, you need to hold FileMaker in a paused state so that users can't perform any other action while attending to the dialog. Generally it's a bad idea to leave a script pausedusers can get stuck in limbobut in this case it is exactly the behavior you want. The script ends, leaving the user in a paused state. You need to remember that a pause state is active when performing any additional scripts or when providing other functions in your Pop Up window.

Now return to ScriptMaker and create the Done script. You need to write whatever application logic your solution requires (for example, committing data to fields from globals, performing an evaluate function, or running a report) and end your script with this:

One final element is critical. You'll notice we haven't yet dealt with the pause state. If you add a Pause/Resume script step to the Done script, FileMaker won't know that you want it to resume a currently paused script. The behavior it respects is to overlay a new pause state on top of the earlier pause state. This is entirely as it should be because this allows you to build routines with multitiered pause states. 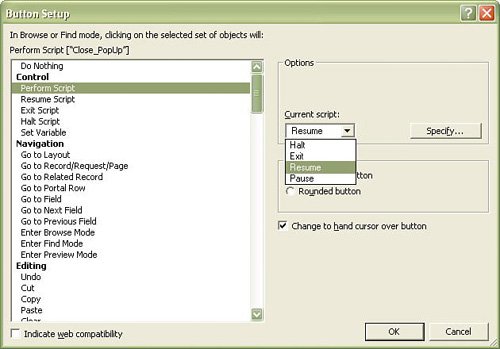 The Current Script option for the Perform Script button behavior is almost never changed. Most often its default state of pausing a currently running script while performing whatever new script is necessary will meet your needs. In this case, however, you need it to resume the current script (which will simply continue from the pause state, effectively ending it) before proceeding through the Done script and closing the pop-up window.

This then closes the pause state without creating a nested second one and allows the user back into the state of using the database solution normally. This, combined with the Close Window script step, gives the user the experience of clicking Done and seeing the window close. Clicking the Open button sends users back to the layout from which they began.

Other window techniques don't seem to add much more functionality to your solution, but they can certainly be fun to include for more polish (or to just show off). Calling these techniques "special effects" is probably a stretchwe hope those of you who are Flash developers will just let this section roll by for what it's worthbut many developers in the community have had some fun coming up with a few tricks you can pull off with window script steps.

Using a simple loop, you can rename the title of a window with progressively scrolling text. Use a Set Window Title script step inside a loop. Use a number increment (stored in a variable) and apply it to a Right or Left function with the text you want to display. The script looks like this:

Not the greatest use of computer technology ever made, but you can certainly draw attention to a warning message or alert of some kind by using it.

By using a similar looping technique, you can alter the horizontal and vertical dimensions of a window so that it appears to grow or expand onto the screen:

This particular example is somewhat slow because it needs to loop 500 times to draw the window in question. Play with the increments in your Set Variable [$loopCounter; $loopCounter + 1 ] script step to make your window draw more quickly. You could just as easily set the width in a similar manner.

The Adjust Window script step includes an option to hide a window that does more than just minimize it: Users can access the window only from the Window menu within FileMaker. If you use a custom menu (discussed later in this chapter) to disable that menu item, you truly have the capability of hiding a window completely from a user.