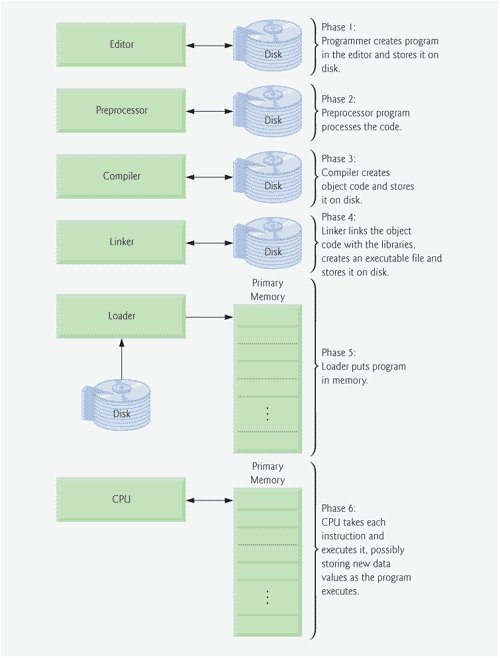 Phase 1 consists of editing a file with an editor program (normally known simply as an editor). You type a C++ program (typically referred to as source code) using the editor, make any necessary corrections and save the program on a secondary storage device, such as your hard drive. C++ source code file names often end with the .cpp, .cxx, .cc or .C extensions (note that C is in uppercase) which indicate that a file contains C++ source code. See the documentation for your C++ environment for more information on file-name extensions.

Two editors widely used on UNIX systems are vi and emacs. C++ software packages for Microsoft Windows such as Borland C++ (www.borland.com), Metrowerks CodeWarrior (www.metrowerks.com) and Microsoft Visual C++ (www.msdn.microsoft.com/visualc/) have editors integrated into the programming environment. You can also use a simple text editor, such as Notepad in Windows, to write your C++ code. We assume the reader knows how to edit a program.

Phases 2 and 3: Preprocessing and Compiling a C++ Program

In phase 2, the programmer gives the command to compile the program. In a C++ system, a preprocessor program executes automatically before the compiler's translation phase begins (so we call preprocessing phase 2 and compiling phase 3). The C++ preprocessor obeys commands called preprocessor directives, which indicate that certain manipulations are to be performed on the program before compilation. These manipulations usually include other text files to be compiled and perform various text replacements. The most common preprocessor directives are discussed in the early chapters; a detailed discussion of all the preprocessor features appears in Appendix F, Preprocessor. In phase 3, the compiler translates the C++ program into machine-language code (also referred to as object code).

Phase 4 is called linking. C++ programs typically contain references to functions and data defined elsewhere, such as in the standard libraries or in the private libraries of groups of programmers working on a particular project. The object code produced by the C++ compiler typically contains "holes" due to these missing parts. A linker links the object code with the code for the missing functions to produce an executable image (with no missing pieces). If the program compiles and links correctly, an executable image is produced.

Phase 5 is called loading. Before a program can be executed, it must first be placed in memory. This is done by the loader, which takes the executable image from disk and transfers it to memory. Additional components from shared libraries that support the program are also loaded.

Finally, the computer, under the control of its CPU, executes the program one instruction at a time.

Problems That May Occur at Execution Time

Programs do not always work on the first try. Each of the preceding phases can fail because of various errors that we discuss throughout the book. For example, an executing program might attempt to divide by zero (an illegal operation for whole-number arithmetic in C++). This would cause the C++ program to display an error message. If this occurs, you would have to return to the edit phase, make the necessary corrections and proceed through the remaining phases again to determine that the corrections fix the problem(s).

Most programs in C++ input and/or output data. Certain C++ functions take their input from cin (the standard input stream; pronounced "see-in"), which is normally the keyboard, but cin can be redirected to another device. Data is often output to cout (the standard output stream; pronounced "see-out"), which is normally the computer screen, but cout can be redirected to another device. When we say that a program prints a result, we normally mean that the result is displayed on a screen. Data may be output to other devices, such as disks and hardcopy printers. There is also a standard error stream referred to as cerr. The cerr stream (normally connected to the screen) is used for displaying error messages. It is common for users to assign cout to a device other than the screen while keeping cerr assigned to the screen, so that normal outputs are separated from errors.