In the next example, we present an enhanced version of the GradeBook class introduced in Chapter 3 and further developed in Chapter 4. The new version of the class asks the user to enter a set of letter grades, then displays a summary of the number of students who received each grade. The class uses a switch to determine whether each grade entered is an A, B, C, D or F and to increment the appropriate grade counter. Class GradeBook is defined in Fig. 5.9, and its member-function definitions appear in Fig. 5.10. Figure 5.11 shows sample inputs and outputs of the main program that uses class GradeBook to process a set of grades.

Figure 5.11. Creating a GradeBook object and calling its member functions.

Source-code file GradeBook.cpp (Fig. 5.10) contains the member-function definitions for class GradeBook. Notice that lines 1620 in the constructor initialize the five grade counters to 0when a GradeBook object is first created, no grades have been entered yet. As you will soon see, these counters are incremented in member function inputGrades as the user enters grades. The definitions of member functions setCourseName, getCourseName and displayMessage are identical to those found in the earlier versions of class GradeBook. Let's consider the new GradeBook member functions in detail.

The user enters letter grades for a course in member function inputGrades (lines 52101). Inside the while header, at line 60, the parenthesized assignment ( grade = cin.get() ) executes first. The cin.get() function reads one character from the keyboard and stores that character in integer variable grade (declared in line 54). Characters normally are stored in variables of type char; however, characters can be stored in any integer data type, because they are represented as 1-byte integers in the computer. Thus, we can treat a character either as an integer or as a character, depending on its use. For example, the statement

prints the character a and its integer value as follows:

The integer 97 is the character's numerical representation in the computer. Most computers today use the ASCII (American Standard Code for Information Interchange) character set, in which 97 represents the lowercase letter 'a'. A table of the ASCII characters and their decimal equivalents is presented in Appendix B.

The fact that assignment statements have values can be useful for assigning the same value to several variables. For example,

On UNIX/Linux systems and many others, end-of-file is entered by typing

on a line by itself. This notation means to press and hold down the Ctrl key, then press the d key. On other systems such as Microsoft Windows, end-of-file can be entered by typing

[Note: In some cases, you must press Enter after the preceding key sequence. Also, the characters ^Z sometimes appear on the screen to represent end-of-file, as is shown in Fig. 5.11.]

In this program, the user enters grades at the keyboard. When the user presses the Enter (or Return) key, the characters are read by the cin.get() function, one character at a time. If the character entered is not end-of-file, the flow of control enters the switch statement (lines 6399), which increments the appropriate letter-grade counter based on the grade entered.

The switch statement consists of a series of case labels and an optional default case. These are used in this example to determine which counter to increment, based on a grade. When the flow of control reaches the switch, the program evaluates the expression in the parentheses (i.e., grade) following keyword switch (line 63). This is called the controlling expression. The switch statement compares the value of the controlling expression with each case label. Assume the user enters the letter C as a grade. The program compares C to each case in the switch. If a match occurs (case 'C': at line 75), the program executes the statements for that case. For the letter C, line 77 increments cCount by 1. The break statement (line 78) causes program control to proceed with the first statement after the switchin this program, control transfers to line 100. This line marks the end of the body of the while loop that inputs grades (lines 60100), so control flows to the while's condition (line 60) to determine whether the loop should continue executing.

The cases in our switch explicitly test for the lowercase and uppercase versions of the letters A, B, C, D and F. Note the cases at lines 6566 that test for the values 'A' and 'a' (both of which represent the grade A). Listing cases consecutively in this manner with no statements between them enables the cases to perform the same set of statementswhen the controlling expression evaluates to either 'A' or 'a', the statements at lines 6768 will execute. Note that each case can have multiple statements. The switch selection statement differs from other control statements in that it does not require braces around multiple statements in each case.

Note that lines 9093 in the switch statement of Fig. 5.10 cause the program to skip newline, tab and blank characters. Reading characters one at a time can cause some problems. To have the program read the characters, we must send them to the computer by pressing the Enter key on the keyboard. This places a newline character in the input after the character we wish to process. Often, this newline character must be specially processed to make the program work correctly. By including the preceding cases in our switch statement, we prevent the error message in the default case from being printed each time a newline, tab or space is encountered in the input.

Figure 5.11 creates a GradeBook object (line 9). Line 11 invokes the object's displayMessage member function to output a welcome message to the user. Line 12 invokes the object's inputGrades member function to read a set of grades from the user and keep track of the number of students who received each grade. Note that the input/output window in Fig. 5.11 shows an error message displayed in response to entering an invalid grade (i.e., E). Line 13 invokes GradeBook member function displayGradeReport (defined in lines 104114 of Fig. 5.10), which outputs a report based on the grades entered (as in the output in Fig. 5.11).

(This item is displayed on page 208 in the print version) 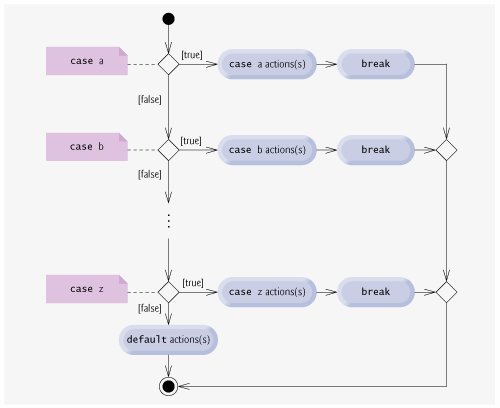 C++ has flexible data type sizes (see Appendix C, Fundamental Types). Different applications, for example, might need integers of different sizes. C++ provides several data types to represent integers. The range of integer values for each type depends on the particular computer's hardware. In addition to the types int and char, C++ provides the types short (an abbreviation of short int) and long (an abbreviation of long int). The minimum range of values for short integers is 32,768 to 32,767. For the vast majority of integer calculations, long integers are sufficient. The minimum range of values for long integers is 2,147,483,648 to 2,147,483,647. On most computers, ints are equivalent either to short or to long. The range of values for an int is at least the same as that for short integers and no larger than that for long integers. The data type char can be used to represent any of the characters in the computer's character set. It also can be used to represent small integers.