The programs we have discussed are generally structured as functions that call one another in a disciplined, hierarchical manner. For some problems, it is useful to have functions call themselves. A recursive function is a function that calls itself, either directly, or indirectly (through another function).[2] Recursion is an important topic discussed at length in upper-level computer science courses. This section and the next present simple examples of recursion. This book contains an extensive treatment of recursion. Figure 6.33 (at the end of Section 6.21) summarizes the recursion examples and exercises in the book.

[2] Although many compilers allow function main to call itself, Section 3.6.1, paragraph 3, of the C++ standard document indicates that main should not be called within a program. Its sole purpose is to be the starting point for program execution.

We first consider recursion conceptually, then examine two programs containing recursive functions. Recursive problem-solving approaches have a number of elements in common. A recursive function is called to solve a problem. The function actually knows how to solve only the simplest case(s), or so-called base case(s). If the function is called with a base case, the function simply returns a result. If the function is called with a more complex problem, it typically divides the problem into two conceptual piecesa piece that the function knows how to do and a piece that it does not know how to do. To make recursion feasible, the latter piece must resemble the original problem, but be a slightly simpler or slightly smaller version. This new problem looks like the original problem, so the function launches (calls) a fresh copy of itself to work on the smaller problemthis is referred to as a recursive call and is also called the recursion step. The recursion step often includes the keyword return, because its result will be combined with the portion of the problem the function knew how to solve to form a result that will be passed back to the original caller, possibly main.

The recursion step executes while the original call to the function is still open, i.e., it has not yet finished executing. The recursion step can result in many more such recursive calls, as the function keeps dividing each new subproblem with which the function is called into two conceptual pieces. In order for the recursion to eventually terminate, each time the function calls itself with a slightly simpler version of the original problem, this sequence of smaller and smaller problems must eventually converge on the base case. At that point, the function recognizes the base case and returns a result to the previous copy of the function, and a sequence of returns ensues all the way up the line until the original function call eventually returns the final result to main. All of this sounds quite exotic compared to the kind of "conventional" problem solving we have been using to this point. As an example of these concepts at work, let us write a recursive program to perform a popular mathematical calculation.

The factorial of a nonnegative integer n, written n! (and pronounced "n factorial"), is the product

The factorial of an integer, number, greater than or equal to 0, can be calculated iteratively (nonrecursively) by using a for statement as follows:

A recursive definition of the factorial function is arrived at by observing the following relationship:

The evaluation of 5! would proceed as shown in Fig. 6.28. Figure 6.28(a) shows how the succession of recursive calls proceeds until 1! is evaluated to be 1, which terminates the recursion. Figure 6.28(b) shows the values returned from each recursive call to its caller until the final value is calculated and returned. 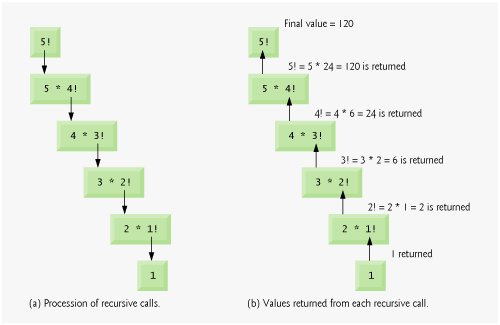 The program of Fig. 6.29 uses recursion to calculate and print the factorials of the integers 010. (The choice of the data type unsigned long is explained momentarily.) The recursive function factorial (lines 2329) first determines whether the terminating condition number <= 1 (line 25) is true. If number is indeed less than or equal to 1, function factorial returns 1 (line 26), no further recursion is necessary and the function terminates. If number is greater than 1, line 28 expresses the problem as the product of number and a recursive call to factorial evaluating the factorial of number - 1. Note that factorial ( number - 1 ) is a slightly simpler problem than the original calculation factorial ( number ).

(This item is displayed on page 291 in the print version)

The exercises explore using variables of data type double to calculate factorials of larger numbers. This points to a weakness in most programming languages, namely, that the languages are not easily extended to handle the unique requirements of various applications. As we will see when we discuss object-oriented programming in more depth, C++ is an extensible language that allows us to create classes that can represent arbitrarily large integers if we wish. Such classes already are available in popular class libraries,[3] and we work on similar classes of our own in Exercise 9.14 and Exercise 11.5.