To increase the chances that you can identify the true root causes of problems, which can then be targeted for improvement.

The tools in this chapter fall into two very different categories:

To help you consider a wide range of potential causes when trying to find explanations for patterns in your data.

They will help you…

Be sure to check the tools in part B to validate the suspected Xs.

To create a Pareto chart…

Cause and effect diagrams (fishbone or Ishikawa diagrams)

When to use cause and effect diagrams

How to create and use a cause and effect diagram

When to use a C E matrix

How to create a C E matrix

B Confirming causal effects and results

To confirm whether a potential cause contributes to the problem. The tools in this section will help you confirm a cause-and-effect relationship and quantify the magnitude of the effect.

Deciding between these tools

Often in the early stages of improvement, the problems are so obvious or dramatic that you don't need sophisticated tools to verify the impact. In such cases, try confirming the effect by creating stratified data plots (p. 150) or scatter plots (p. 154) of cause variables vs. the outcome of interest, or by testing quick fixes/obvious solutions (seeing what happens if you remove or change the potential cause, p. 152).

However, there are times when more rigor, precision, or sophistication is needed. The options are:

To use stratified data charts…

Option 2 Color code or use symbols for different strata 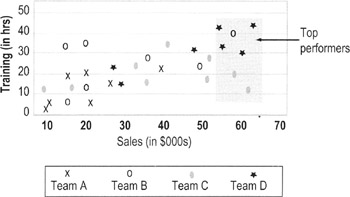 This chart uses symbols to show performance differences between people from different work teams. Training seems to have paid off for Team D (all its top performers are in the upper right corner); Team C has high performers who received little training (they are in the lower right corner).

When to test quick fixes

How to test quick fixes

To use scatter plots… 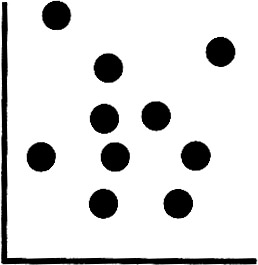 No pattern. Data points are scattered randomly in the chart. 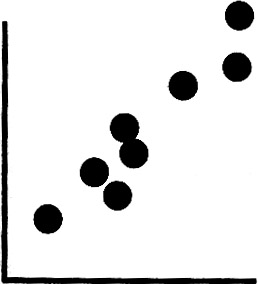 Positive correlation (line slopes from bottom left to top right). Larger values of one variable are associated with larger values of the other variable. 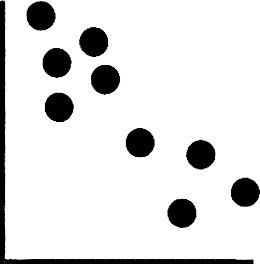 Negative correlation (line slopes from upper left down to lower right). Larger values of one variable are associated with smaller values of the other variable. 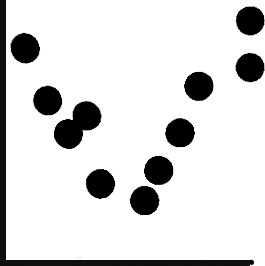 Complex patterns. These often occur when there is some other factor at work that interacts with one of the factors. Multiple regression or design of experiments can help you discover the source of these patterns.

There is a direct correlation between sample size and confidence

The null hypothesis in plain English: the camshafts from Supplier 2 are the same as the target value. Printouts from Minitab showing the results of this hypothesis test are shown on the next page. 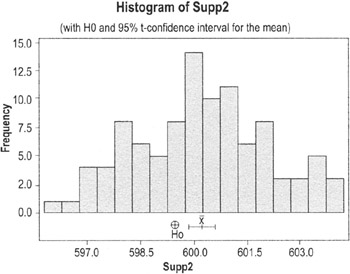 Clues that we should reject the null hypothesis (which, for practical purposes, means the same as concluding that camshafts from Supplier 2 are not on target):

The same automobile manufacturer has data on another supplier and wants to compare the two: 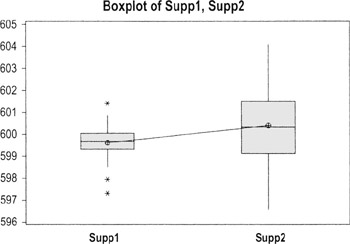 There are two indicators in these results that we have to reject the null hypothesis (which, in practice, means concluding that the two suppliers are statistically different):

(Given the spread of values displayed on this boxplot, you may also want to test for equal variances.) 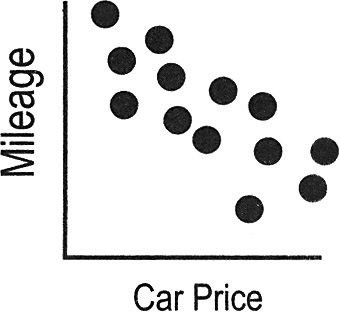 The price of automobiles shows a negative correlation to gas mileage (meaning as price goes up, mileage goes down). But higher prices do not CAUSE lower mileage, nor does lower mileage cause higher car prices.

Regression analysis and other types of hypothesis tests generate correlation coefficients that indicate the strength of the relationship between the two variables you are studying. These coefficients are used to determine whether the relationship is statistically significant (translation: whether you can conclude that the observed relationships are not merely happening by chance). For example:

Regression Analysis is used in conjunction with correlation calculations and scatter plots to predict future performance based on past results. 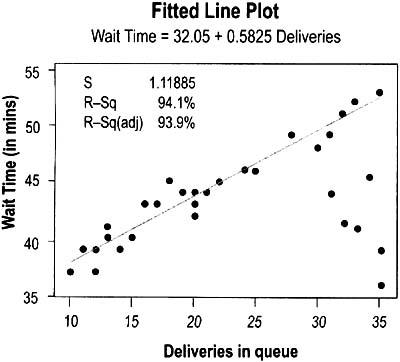 The graph shown on the previous page was generated to depict how the number of pizza deliveries affected how long customers had to wait. The form of the simple regression equation is:

This means that, on average, customers have to wait about 32 minutes even when there are no deliveries in queue, and that (within the range of the study) each new delivery in queue adds just over half a minute (0.58 min) to the waiting time. The company can use this equation to predict wait time for customers. For example, if there are 30 deliveries in queue, the predicted wait time would be:

Below is the Minitab session output. The predictor equation proceeds the same as for simple regression (p. 168).

R-squared is the amount of variation that is explained by the model. This model explains 94.8% of the variability in Pizza Delivery Time.

S is the estimate of the standard deviation about the regression model. We want S to be as small as possible.

The P-values tell us that this must have been a hypothesis test.

If a p-value is greater than 0.10, the term is removed from the model. A practitioner might leave the term in the model if the p-value is within the gray region between these two probability levels. 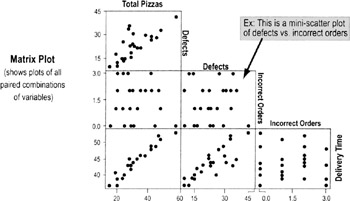 These observations are confirmed by the correlation matrix (below). In the following example, the table shows the relationship between different pairs of factors (correlations tested among Total Pizzas, Defects, Incorrect Order, Delivery Time on a pairwise basis).

In each pair of numbers:

To compare three or more samples to each other to see if any of the sample means is statistically different from the others.

When to use ANOVA

To tell whether the three or more options are statistically different, ANOVA looks at three sources of variability…

In One-Way ANOVA (below), we look at how different levels of a single factor affect a response variable.

In Two-Way ANOVA (p. 180), we examine how different levels of two factors and the interaction between those two factors affect a response variable.

A one-way ANOVA (involving just one factor) tests whether the mean (average) result of any alternative is different from the others. It does not tell us which one(s) is different. You'll need to supplement ANOVA with multiple comparison procedures to determine which means differ. A common approach for accomplishing this is to use Tukey's Pairwise comparison tests. (See p. 178)

Form of the hypotheses:

The comparisons are done through "sum of squares" calculations (shown here and depicted in the graph on the next page):

By comparing the Sums of Squares, we can tell if the observed difference is due to a true difference or random chance.

Conclusion: Because the p-value is 0.004, we can conclude that at least one of the facilities is statistically significantly different from the others, a message visually confirmed by the boxplot. 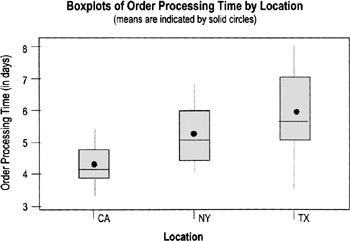 To tell which of the facilities is different, perform a Tukey Pairwise Comparisons, which provides confidence intervals for the difference between the tabulated pairs. Alpha is determined by the individual error rate—and will be less for the individual test than the alpha for the family. (See chart on next page.)

In ANOVA, the degrees of freedom are determined as follows:

Form of the hypothesis

With the chi-square test for independence, statisticians assume most variables in life are independent, therefore:

How to calculate chi square

Response Variable—An output which is measured or observed.

Fractional Factorial DOE—Looks at only a fraction of all the possible combinations contained in a full factorial. If many factors are being investigated, information can be obtained with smaller investment. See p. 190 for notation.

Level—A specific value or setting of a factor.

Effect—The change in the response variable that occurs as experimental conditions change.

Interaction—Occurs when the effect of one factor on the response depends on the setting of another factor.

Replication—Replicating (duplicating) the entire experiment in a time sequence with different setups between each run.

Randomization—A technique used to spread the effect of nuisance variables across the entire experimental region. Use random numbers to determine the order of the experimental runs or the assignment of experimental units to the different factor-level combinations.

Resolution—how much sensitivity the results have to different levels of interactions.

Run—A single setup in a DOE from which data is gathered. A 3-factor full factorial DOE run at 2 levels has 23 = 8 runs.

In most software programs, each factor in the experiment will automatically be assigned a letter: A, B, C, etc.

Interaction effects are labeled with the letters of the corresponding factors:

Design of Experiments is one of the most powerful tools for understanding and reducing variation in any process. DOE is useful whenever you want to:

Review your process map or SIPOC diagram and/or use cause identification methods (see pp. 145 to 155) to identify factors that likely have an impact on the response variable. Classify each as one of the following:

Consider factors in the context of whether or not they are:

Loss of resolution with fractional factorials

This experiment will test 4 factors at each of 2 levels, in a half-fraction factorial (24 would be 16 runs, this experiment is the equivalent of 23 = 8 runs).

The resolution of IV means:

Most statistical software packages will give you results for main effects, interactions, and standard deviations.

If data points hug the diagonal line, the data are normally distributed

The number of data points here makes this chart difficult to analyze, but the principles are the same as those for time series plots

The plots are usually generated in Minitab or other statistical package. The interpretation is based on the following assumptions:

Examine the plots as you would any plot of the varying styles (regression plot, histogram, scatter plot, etc.).