The following are policies that need to be determined to configure your devices to build ISAKMP/IKE Phase 2 connections:

The following sections will discuss this information in more depth.

IPsec can use one or two security protocols to protect the data transmitted across the data connections built in ISAKMP/IKE Phase 2:

Table 3-1 provides a brief comparison of the two protocols. The two subsequent sections will cover them in more depth.

[1] Many firewall appliances performing PAT use proprietary methods to pass ESP traffic between interfaces. For example, Linksys firewall routers and Cisco PIX and ASA security appliances support this process; however, this feature is vendor-dependent and is implemented using a proprietary method.

When providing protection of a packet, AH protects the entire packet with the exception of mutable fields, like the TTL and TOS fields in the IP header. AH is an IP protocol like ICMP, TCP, and UDP. It is assigned an IP protocol number of 51. Figure 3-6 shows an example of AH being used to protect an IP packet.

Here's a description of the fields found in the AH header:

One of the things you've probably noticed is that AH doesn't perform encryption as one of its protection services; therefore, it has limited use when you need to transmit data across public networks. Plus, AH doesn't work with NAT or PAT, for the following reasons:

Therefore AH is commonly used inside a network, typically with connections using transport mode, as between an internal router and a syslog server or a PIX and a TFTP server. I'll discuss address translation issues in more depth later in the "Address Translation Issues" section of this chapter.

ESP, defined in RFC 2406, provides Layer-3 protection of data. It has an IP protocol number of 50 and offers the same type of services that AH provides, but with two exceptions:

Figure 3-7 shows the process ESP performs on user data to protect it between two IPsec peers. Depending on whether the connection mode is transport or tunnel, the upper layer data or the first IP packet is padded. The padding is used to reduce the likelihood of an eavesdropper guessing what the payload is based on its length. The length is added to this information, then the next header denotes the contents of the payloadthis is the same field used by AH. 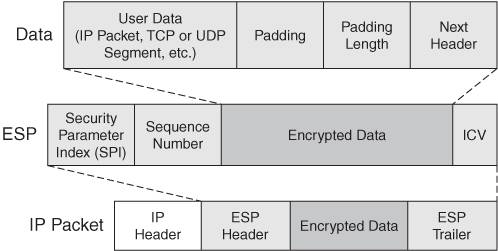 Typically the information is then encrypted and an ESP header and, optionally, a trailer, are added. The SPI field serves the same purpose it does with AH: it uniquely identifies each IPsec data connection terminated on a device. The sequence number is used to prevent replay attacks. Optionally, if you have enabled packet authentication, an ICV value is added at the end of the encrypted data. The ICV value is created by taking the ESP header, the encapsulated data, and a key, and running them through an HMAC function (creating a digital signature). An IP header is then added to the front of the ESP header to transport the information to the remote IPsec device.

When a remote IPsec peer receives ESP information, it performs the process in reverse. If authentication is used, the ICV value is verified. If valid, the encrypted data is decrypted. This makes sense, because there is no point in wasting extra CPU cycles to decrypt something if it has been tampered with.

AH and ESP are not mutually exclusive of one another; they can be used in conjunction with each other because ESP provides encryption and AH provides better protection for data authentication and integrity. However, because AH has problems with intermediate devices changing information in the outer IP header, it is typically not used in public networks.

As I mentioned in the last two sections, there are two types of modes that AH and ESP can use to transport protected information to a destination:

In transport mode, the real source and destination of the user data are performing the protection service. It becomes more difficult to manage as you add more and more devices using this connection mode. This mode is commonly used between two devices that need to protect specific information, like TFTP transfers of configuration files or syslog transfers of logging messages.

In tunnel mode, intermediate devices (typically) are performing the protection service for the user data. This connection mode is used for site-to-site and remote access connections. Because the original IP packet is protected and embedded in AH/ESP and an outer IP header is added, the internal IP packet can contain private IP addresses. Plus, if you're using ESP for encryption, the real source and destination of the user data is hidden from eavesdroppers. The main advantage of tunnel mode over transport mode is that the protection service function can be centralized on a small number of devices, reducing the amount of configuration and management required. Both of these modes were discussed in detail in Chapter 1, "Overview of VPNs."

As mentioned in the "IPsec Connections" section earlier, a security association (SA) groups all of the necessary security components to communicate successfully with an IPsec peer. With data SAs, you'll have one data SA, per direction, per protected pipe. For example, if you were using only ESP for protection between two peers, you'd have two SAs: one for each peer. However, if the peers were using both AH and ESP, you'd have two SAs per peer: one for AH and one for ESP on both peers. Therefore, you can't really look at an SA as a "connection," because you could be using both AH and ESP to provide protection. Both would be separate SAs, but with one single connection to a remote peer. The following two sections will discuss the components of a data SA and how data SAs are negotiated.

Components of a Data SA

Here are the components you'll find in a data SA:

How Data SAs Are Negotiated

Let's look at a simple example of how the negotiation process takes place. Assume IPsecA has the following transforms:

IPsecB has the following transforms:

Assuming that there is a matching transform, other things need to be compared or negotiated, such as the traffic that should be protected, the lifetime of the data SAs, and the DH key group to use for PFS, if this is specified and can be negotiated. If this information cannot be negotiated successfully, the data SA setup process fails and no user data can be transmitted between the two IPsec peers.

The one thing that doesn't necessarily have to match between the two peers is the lifetime of the data connections. If there is a mismatch in the lifetime, the two IPsec peers should negotiate and use the lower value between them. However, some vendors don't follow this guideline; for those vendors you'll need to also match the lifetime values.