We commonly use the term "key" in day-to-day life. One definition of a key is a tool to open a locked door, where something is kept hidden from prying eyes. In the data world, the term "key" has a similar meaning. A key is used to protect information in various ways. For instance, a data key performs a similar function as a password used to protect a user account or a PIN (personal identification number) used with your ATM card to access your bank account. Normally, the longer the key, the more secure the protection it can provide; however, this is not always the case. The following three sections will discuss how keys are used and the two types of keying algorithms: symmetric and asymmetric.

In network security, keys serve a multi-functional process. For example, keys are used for all of these three critical VPN functions:

There are two basic types of keying solutions:

The following sections will talk more about these two basic types of keying implementations.

Symmetric keys use the same single key to provide a security function to protect information. For example, an encryption algorithm that uses symmetric keys uses the same key to encrypt and decrypt information. Because the same key is used to create and verify the security protection, the algorithm used tends to be fairly simple and thus very efficient. Therefore, symmetric algorithms, like symmetric encryption algorithms, tend to work very quickly.

One problem, however, with symmetric keying is that the two devices performing protection of data somehow have to get the same key value. For example, if two devices, RouterA and RouterB, are performing DES encryption, and RouterA generates the symmetric key for DES, RouterB also will need this same key to decrypt information that RouterA sends it. There are two basic ways to accomplish this:

This last option is a "catch-22" situation, because to have a secure connection, you need keys; and to share keys, you need a secure connection. Pre-sharing keys doesn't scale very well. Later in the chapter in the "Key Exchange" section I'll discuss ways of sharing keys, dynamically, in a secure fashion between two devices without having to resort to a manual-based pre-sharing method.

The private key is kept secret by the source and is never shared with any other device. The public key is given out to other devices. You can't randomly choose any value for the two keys; instead, a special algorithm is used to create the keys, because they need to have a symbiotic relationship with each other to provide protection.

As you can see from this example, even if an attacker was eavesdropping and saw the public key being transmitted from RouterA to RouterB or vice versa, it would not do him any goodhe would need the private keys to decrypt data, and these are never shared by RouterA or RouterB. 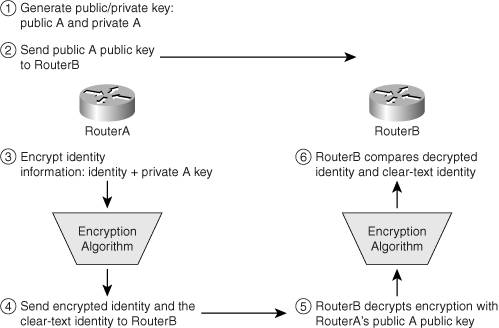 As you can see in the figure, the following happens:

In the example in Figure 2-1, the private key, as in encryption, is never shared (kept private). The public key is shared and used to verify the encrypted identity information, commonly called a digital signature, created with the related private key.

One concern with this method of authentication is a man-in-the-middle attack, where someone other than RouterA generates the public/private keys and pretends to be RouterA. This can be overcome by pre-sharing the public key of RouterA, out-of-band, with RouterB. A more scalable approach will be discussed in the "Digital Certificates" section later in this chapter.

Advantages and Disadvantages of Asymmetric Keying

No known method as of today can factor the correct number to break the encryption in a reasonable time, unlike with symmetric keying. For example, if I gave you two very large numbers, like 34,555 and 88,333, and asked you to multiply these numbers together, you could easily figure out the answer: 3,052,346,815. However, if I gave you 3,052,346,815 and asked you to figure out the two numbers that were originally used to come up with this value, you would probably spend the rest of your life trying to find the answer, and would probably be unsuccessful. This is the beauty of asymmetric keying, which is why, first, most asymmetric keying algorithms use this computation process. Second, an attacker needs to know both the private and public keys to compromise security, and the private key is never shared with any other device.

Here are some examples of standards/algorithms that use asymmetric keys: