VPNs were developed initially to deal with security issues of transmitting clear text data across a network. Clear text data is information that can examined and understood by any person, including the source, destination, and anyone in between. Examples of applications that send traffic in a clear text format are Telnet, file transfers via FTP or TFTP, e-mail using the Post Office Protocol (POP) or Simple Mail Transfer Protocol (SMTP), and many others. Unethical individuals, such as hackers, can take advantage of applications that send clear text data to execute the following types of attacks:

Each type of attack exposes your data and company assets to various risks. The following three sections discuss these attacks in more depth.

The most common type of attack with clear text data is eavesdropping. In an eavesdropping attack, a person examines the contents of packets as they are transmitted between two devices. Some types of applications and protocols are susceptible to eavesdropping attacks, including Telnet, POP, HTTP, TFTP, FTP, Simple Management Network Protocol (SNMP), and others.

With all of these applications and protocols, authentication information, like usernames and passwords, is passed, in clear text, between two devices. A hacker can use this information to execute access and other types of attacks.

Even though some protocols might send information in clear text, they, in many cases, have a minimal authentication method to verify an individual's identity before allowing that person access to a resource. For example, applications such as Telnet, POP, and SMTP allow for authentication, even though the authentication information is sent in clear text. Actually, these protocols initially were not designed for security, but to solve specific connectivity problems. However, things have changed since these applications were developed in the 1970s, 1980s, and early 1990s, especially with the explosion of Internet usage.

Typically, a protocol analyzer is used to examine (sniff) packets. The analyzer can be a hardware-based solution or a PC with a promiscuous network interface card (NIC) and appropriate software. For this kind of attack to work, the attacker must have access to a connection between the actual source and destination devices.

One of the most common solutions for companies to protect credit card information in an e-commerce environment is to use HTTP with SSL (HTTPS) to encrypt user-sensitive information. Another common solution for corporate and partner access is to implement a VPN with encryption. Encryption scrambles the clear text information into what appears as a random string of characters; only the destination will be able to decipher the information. Encryption can be implemented with one of the two following methods:

A masquerading attack is where an individual hides their identity, possibly even assuming someone else's identity. In a networking environment, this is accomplished by changing the source addressing information in packets. In the TCP/IP world, this is commonly referred to as spoofing. An attacker using spoofing typically combines this with either a denial of service (DoS) or unauthorized access attack.

Unlike eavesdropping attacks, many types of tools can be used in a masquerading attack. To change the source IP address in a packet, a specialized packet-generating program is needed. This allows the hacker to specify the source address to be used, instead of using the IP address associated with the hacker's PC NIC.

In a Layer-2 network, a hacker could use ARP spoofing to redirect traffic between two devices to the hacker's device.

Of course, using a robust firewall system to restrict the kinds of packets into your network is a necessity. However, a firewall system will allow traffic from authorized external systems, even if it happens to be VPN traffic. Therefore, some type of packet authentication check is required. For example, you need to determine if packets are coming from a valid source, rather than from an attacker executing a masquerading attack.

Packet authentication is discussed in the "Packet Integrity" section later in this chapter and hashing functions are discussed in Chapter 2, "VPN Technologies."

A man-in-the-middle attack can take on many forms, including the two most common: 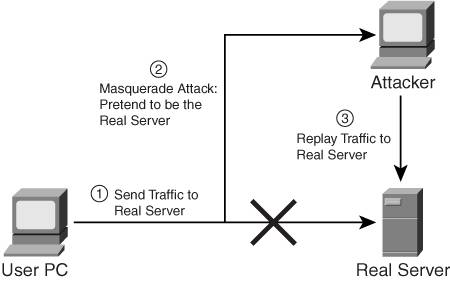 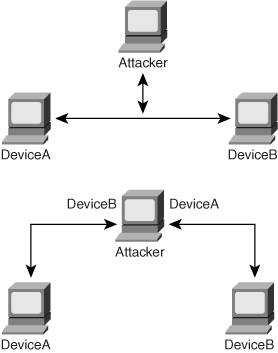 On the other hand, the diagram in the bottom part of Figure 1-2 is more representative of how a session hijacking attack occurs. In this example, when DeviceA sends traffic to DeviceB, the attacker intercepts the traffic and pretends to be DeviceB. He responds back to DeviceA with information similar to what DeviceB would send. From DeviceA's perspective, the device assumes it is really interacting with DeviceB. The attacker uses the same process when interacting with DeviceB. With data flowing back and forth between DeviceA and DeviceB, the attacker will typically perform a data manipulation attackmodifying data between the two devices to pull off the actual session hijacking. The attacker uses this process to learn more information about the two devices, including their security weaknesses.

With protocols such as UDP and ICMP, implementing a session hijacking attack is a simple process for the hacker because there are no real mechanics that define how a connection is maintained. With TCP, this becomes more difficult, especially with TCP's sequencing process. Sequence numbers should be random, making it very difficult for a hacker to guess what a sequence number might be for the next segment. Therefore, hijacking a TCP session can be difficult. However, not all TCP applications use random sequence numbers. In many instances, it is very easy to guess what the sequence number is, based on past numbers seen for an existing connection. A skilled attacker can then insert himself into the existing TCP connection. Of course, this is not a simple process. The hacker will need to perform quite a few steps and use some sophisticated tools to pull off this attack.

Attackers will typically use an attack protocol analyzer to capture packets with the two types of attacks described. With a session replay attack, the hacker might even use Java or ActiveX scripts to capture packets from a web server session. With TCP session hijacking attacks, the attacker will need some type of specialized TCP sequence-number-guessing program to successfully intercept and take over an existing TCP connection.

There are several solutions for man-in-the-middle attacks. For instance, to prevent the hijacking of TCP sessions, you could have a firewall system randomize TCP sequence numbers, ensuring that it becomes almost impossible for the attacker to predict future sequence numbers for the session. The Cisco PIX security appliance and other available devices can perform this function. However, an attacker can use other methods, as discussed in the last section, to take over a session.

The best solution to this kind of problem is to use a VPN. VPNs provide three tools to combat man-in-the-middle attacks: