Your IS-IS network has several areas, some which have multiple exit points to your core area, and you want to increase the routing efficiency of your Level 1 routers.

Unlike OSPF, which combines all routes from all areas into a single link-state database, IS-IS keeps separate databases for its Level 2 and Level 1 routes. Because a Level 1 router knows only about the routers in its area, it routes traffic that is destined for another area to the nearest Level 1Level 2 router, and that router then forwards the traffic to the external area. Under most circumstances, this is what you want to happen because it minimizes the number of routes on which the SPF calculation needs to be performed. In some situations, however, this behavior results in traffic going through more links than necessary as it travels from a Level 1 router to its destination. Figure 11-2 shows such a case. To reduce the number of links, you can inject, or leak, an external route from the Level 2 link-state database into an area's Level 1 database.

In this network, traffic sent from the Level 1 RouterH to RouterE, which is in an external network, goes through RouterF because it is the closest Level 1Level 2 router. You can see this in the RouterH routing table:

Figure 11-2. IS-IS topology for leaking routes from Level 2 to Level 1 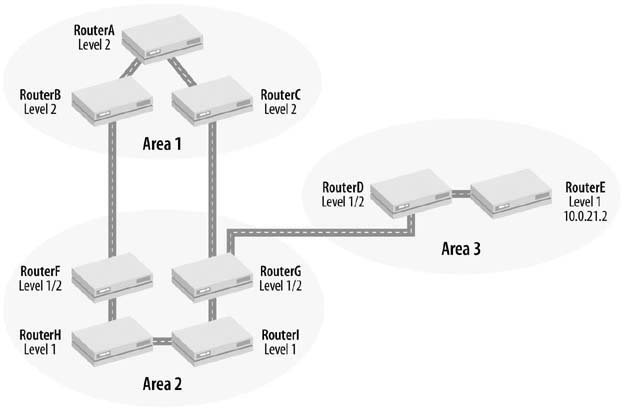 You do this is by creating a routing policy on RouterG that leaks the route to the external network 10.0.21.0/24 into the Level 1 routers in Area 2. The policy in this recipe contains a route filter that matches all /32 addresses in this external network and redistributes all IS-IS Level 2 routes from the network into IS-IS Level 1. Matching the /32 addresses captures all the addresses you are interested in, which are the loopback addresses. After you apply the policy on the Level 1Level 2 router, you see on RouterH, the Level 1 router, that the route to 10.0.21.0/24 has leaked into its routing table: