The configuration in Recipe 13.2, in which all BGP systems within the AS are fully meshed, is a standard IBGP implementation. The full mesh results from listing all IBGP peers in a peering group rather than from having them all be physically connected and from using an IGP within the AS to distribute BGP routes. The full mesh is necessary so that external routing information can be redistributed among all routers within the AS with the help of the IGP running in the AS. As you can imagine, as the number of IBGP routers increases, you have to configure many BGP neighbor commands in each routers configuration, and there is a lot of overhead because a large number of TCP connections need to be maintained for each IBGP peering.

There are two common ways to deal with this scaling issue. One is route reflection, which provides one means of decreasing BGP control traffic and minimizing the number of update messages sent within the AS. The second method is confederations. 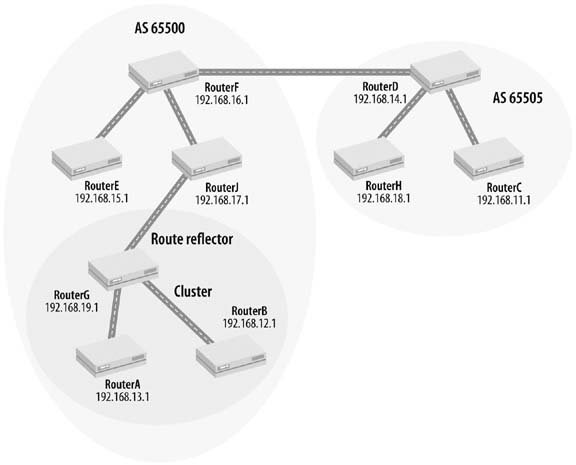 
This configuration is a lot simpler than having to specify all the IBGP neighbors. Another advantage from the point of view of the routers configurations is if you later add routers to the cluster, you do not need to change the configuration on the existing client routers in the cluster.

The nonclient routers in the AS, RouterE and RouterF, need to establish an IBGP session with RouterG but they don need sessions with RouterA or RouterB. In this small network, this is a savings of four TCP sessions and four IBGP peerings. Again, if you add routers to the cluster, the IBGP group configuration on the nonclient routers doesn need to change.


Looking at the routes that RouterB has learned, you see that it still knows how to reach routes in AS 65505:


A detailed look at one of these routes shows information about the cluster:

This recipe illustrates a simple route reflection setup. One problem is that the route reflector is a single point of failure. If it goes down, its two peers lose their connection to the IBGP network. It is a common practice to configure two route reflectors for each cluster to provide backup.

Another less commonly used way to subdivide a large IBGP network into more manageable groups is create sub-ASs within your AS and link them together as a BGP confederation. On each IBGP router in the sub-AS, define the sub-AS number and the confederation group:


Here, the main AS number is 65500 and the two sub-ASs are 65501 and 65502. This router is in the 65502 sub-AS. The set autonomous-system command defines the sub-AS number, and the set confederation command identifies all the sub-ASs in the main AS.

From BGPs point of view, each sub-AS is a separate AS because each has a different AS number. So, you configure each sub-AS as you would an EBGP connection, setting up border routers between the sub-ASs. On each of these routers, create an external group to connect the two sub-ASs. The following commands configure the EBGP group on the border router in sub-AS 65502:


The set peer-as command identifies the sub-AS number. The border router also has an IBGP group to create peerings with the IBGP routers in the sub-AS:


Just like with the EBGP sessions between ASs, you need a next-hop-self policy in the IBGP group for the sub-AS border router (see Recipe 13.4).

As with route reflectors, BGP confederations (see Figure 13-4) reduce the number of peering sessions you need to configure and the number of TCP sessions that the routers need to establish to maintain full-mesh connections between all IBGP routers.

Figure 13-4. Confederation within the AS 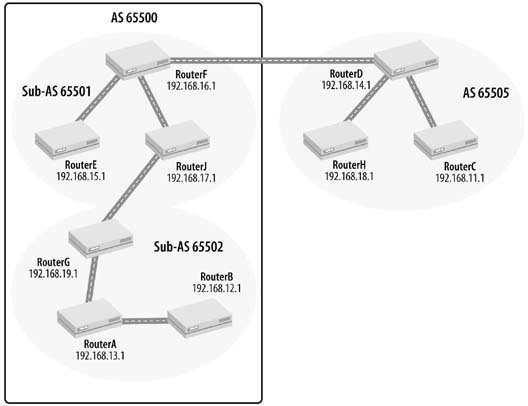