There are some drawbacks to using layout regions. First and possibly foremost, layout regions are not supported on the Web. Second, the design interface in layout regions is somewhat crude in comparison to other Windows application-development systems. For example, there are no alignment tools. You cannot select a group of objects and click an icon or make a choice from the menu that aligns the objects on center or on the bottom, top, or sides. When new objects are added, by default they appear in the center of the layout region and must be moved. Moving and aligning static text and fields is problematic . Last, rich-text fields cannot be used and layout regions cannot contain subforms or shared fields.

Fields are added by clicking the Create Field SmartIcon or from the menu. Fields are called controls and are added in the center of the region.

Text cannot be added as you would do in a standard form area by simply typing in text, but they must be added from the menu by choosing Create, Layout Region, Text or by clicking the Create Textbox icon. As with fields, the text box is initially placed in the center of the layout region and must be moved.

A Graphic button is similar to a hotspot ”you can copy a graphic image to the Clipboard and paste it onto a layout region. You can then program the button. In layout regions, you can stack images and other objects on top of each other. You can control the order of their appearance with the Design Bring to Front and Design Send to Back buttons.

Figure 5.44. The properties box of a layout region has two tabs: Layout Info and Hide When. 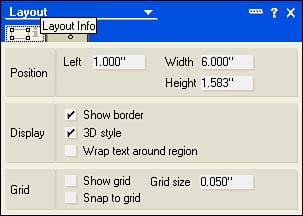 The style and size of the layout region can be modified on the Layout Info tab. There are three sections: Position, Display, and Grid. The size can be changed in the Position section by typing in new values or by dragging one of the grab handles (small square boxes at the corners and sides of the region) and resizing the region. The Display options are Show Border, 3D Style, and Don't Wrap Text Around Region. The Grid section has check boxes for Show Grid and Snap to Grid. The default Grid size is .050" and can be changed. The grid control features are ones that you might be familiar with from other Windows applications. Turning on the grid displays a background of dots to help align controls. Snap to Grid aligns all objects in the layout region with the grid.

Figure 5.45. This dialog box displays the history of a document.

You can also place a layout region on a subform and call it using @DialogBox or the LotusScript DialogBox method.

The same dialog box can be called from LotusScript using the DialogBox method. A sample script is the following: