The Document Object Model, or DOM, was new to R5 and is enhanced in Domino 6 as shown in Figure 16.4, but it is not new to browser technology. What really is the DOM? When a browser renders an HTML document, it reads the HTML code and creates an in-memory tree representation for that page. This tree is a lot like the Designer's Object pane, which references all the available methods , properties, and events for a selected object. 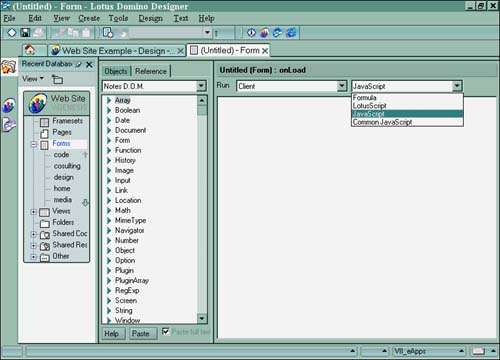 In this case, the Web DOM (the browser) exposes the objects and events for that page as shown in 16.5. That tree, along with its APIs, makes up the Domino DOM, shown in Figure 16.4. 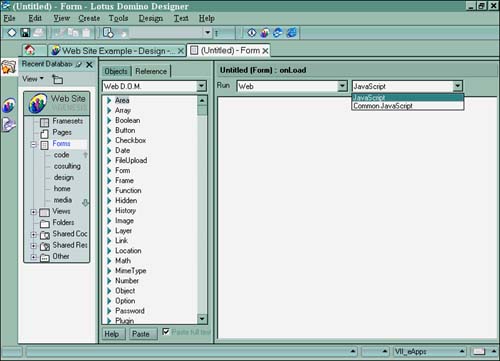 The DOM determines what objects are actually available in the model and determines each object's set list of methods, properties, and events. For example, we know that a document contains a form, that a form contains fields or elements, and that a text element has a given value. This information makes it easy to understand how to access the object using JavaScript, using the DOM:

In this example, document is the object model called, forms is the object in the model, textfieldname is the element on the form object, and value is the data inside the field element. The DOM makes this simple and straightforward, as shown in Figure 16.6.

Figure 16.6. The Document, Form, Field element and its value as shown in the DOM pane are the same as document.forms[0].TextFieldName.value in JavaScript. 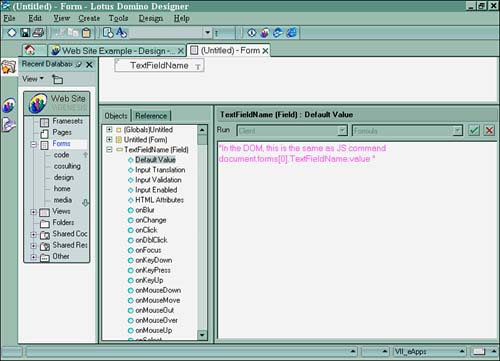 The question is, "What Document Object Model is supported in Domino 6?" Domino 6 is based on the HTML 4.0 DOM. This can get confusing because different versions of browsers offer different DOM support. Netscape 3.0 and IE 3.0 have different DOM support than their 4.0 versions. The 5.0 browsers offer yet another array of DOM support. Amid this chaos, the World Wide Web Consortium (W3C) was formed to help define standards for the Web. The organization currently is working on defining a DOM for standardization. In any event, Lotus has committed to support that definition.