As always, it is a good idea to plan the frameset before designing it. You might consider several common layouts for framesets. The Create Frameset dialog window has 12 such layouts. A drop-down list selects the number of frames from 2 to 4, and each selection has four arrangements from which to choose (see Figure 10.2). The following list describes common uses for the frames in these framesets:

Figure 10.2. Choices for arrangements are available in the Create New Frameset dialog box. Each numbered selection from 2 to 4 has four prebuilt arrangements, for a total of 12 different styles.

Rather than take up space with layouts based on all the previous arrangements, you'll see how to create a frameset with three panes. To create a new frameset, choose Framesets from the database design list. Click the New Frameset button, and the Create New Frameset dialog box opens (see Figure 10.3). Choose 3 for the number of frames, and click the second arrangement from the left. Click OK, and you are presented with a three-paned frameset.

Figure 10.3. Choosing a frameset style is easy with the Create New Frameset window. 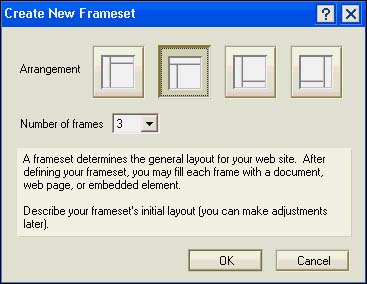