Figure 10.4. The Frameset Designer has four buttons to alter the appearance of the frames and frameset. 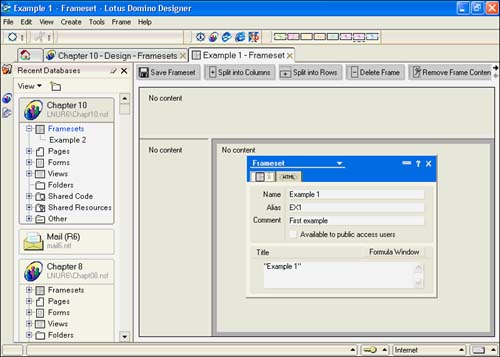 Before you save your new frameset, you must name it and optionally provide an alias and title. The title can be plain text, as in this example, or you can write a formula to calculate the title. If you don't add a title, the frameset displays "Untitled" in the Window tab. For you HTML fans, this becomes the HTML page title, enclosed in the container tag

. Titles are displayed in the Window tab of the Notes client, as shown in Figure 10.5.

Figure 10.5. This figure shows a typical frameset with navigator, banner, and content frames. Note the name of the frameset, Example 1, in the Window tab. 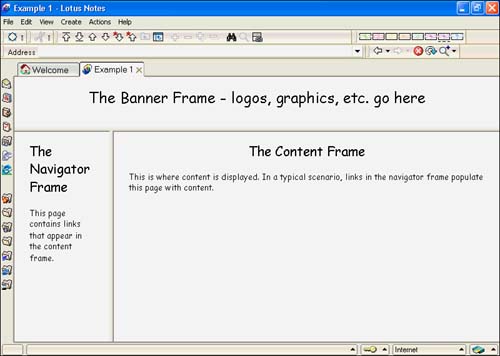 The HTML tab contains the standard settings and is not discussed here.

Using the View and Frame Menus

Whenever you work in a frameset, a new choice appears in the View menu and a new menu appears, the Frame menu. The View menu contains two options, Refresh All option and Show Frame Content. Refresh All refreshes the content of all frames within the frameset. Show Frame Content is a toggle that turns the display of the frame contents in the Frame Designer on and off. When it's turned on, you can see the pages and other objects that you are displaying in a frame "live." When it's turned off, frames display the background color with text indicating the content type and value of each frame. With Show Frame Content turned on, you can more easily adjust the sizes of the frames to fit the contents.

If you have Show Frame Content turned on and the contents of a frame consist of an Internet URL, that link is displayed in the frame during design. This is not a problem as long as you have a constant connection to the Internet, but if you have a dial-up connection, Domino dials your Internet service provider.

The Frame menu has the following choices:

You have much more control over the preview choices from the button bar than from the context menu. Because choosing a preview type is a single click on a button, it is also more efficient. From the button bar, you can see buttons for Notes Preview, Notes Browser Preview, Internet Explorer Preview (if installed), and Netscape Preview (if installed).

You can right-click a frame in the Frameset Designer. A context menu is displayed with the same menu choices. For example, you can refresh the content of an individual frame by right-clicking the frame and choosing Refresh Frame Content from the context menu.

The Frameset Designer has six buttons, only two of which aren't available from the Frames menu:

Splitting Frames in a Frameset

You are by no means limited to the 12 basic layouts, nor are you limited to the number of frames in the Create New Frameset window. When you've created a basic frameset, you can split any frame into new frames either vertically (Split into Columns) or horizontally (Split into Rows). For example, you could start with the basic three-paned layout shown in Figure 10.5 and add a frame to the upper-right corner for a logo. To do this, click in the topmost frame, the "banner" frame. You should notice that the frame has a thick gray border when selected, so you can always tell which frame you're working with. Click the Split into Columns button, and a new frame is added to the right of the existing frame (see Figure 10.6).

Figure 10.6. The top frame has been split vertically into two frames. The thick bar in the frame at the upper right indicates that it is the frame currently selected. 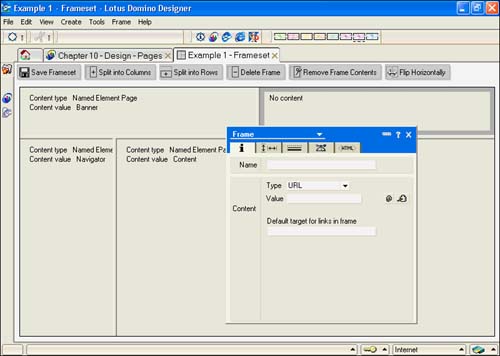 You can also use another frameset in a frame to give additional flexibility and more frames.

The sizes of each frame can be easily changed as well. Simply grab the frame border with the mouse, and click and drag it to the desired position. You can also alter the size of frames using the Frame properties box, which is discussed next in the section titled "Working with Frames."

Now that you've learned how to create a basic frameset, add new frames, and resize the existing frames, you're ready to begin working with the contents of the frames themselves.