Contracts between suppliers and the project team are commonly employed to accomplish two objectives:

In this chapter, we will address project contracting as an instrument of risk management.

The Elements of a Contract

A contract is a mutual agreement, either oral or written, that obligates two or more parties to perform to a specific scope for a specified consideration, usually in a specified time frame. The operative idea here is mutual agreement. A contract cannot be imposed unilaterally on an unwilling supplier. In effect, as project manager you cannot declare the project to be in contract with a supplier, have an expectation of performance, and then return later and claim the supplier is in breach for not performing. Therefore, it is generally understood in the contracting community that the following five elements need to be in place before there is a legal and enforceable contract:

Project and Supplier Risks in Contracts

Contracts are used largely to change the risk profile of the project. Project managers contract for skills, staff, facilities, special tools and methods, and experience not available or not available at low enough risk in the project team itself. Some contracts begin as "team agreements" wherein two companies agree to work together in a prime contractor-subcontractor role, whereas other contracts are awarded to a sole source, selected source, or competitive source. [1]

Regardless of how the two parties come together with a contract, the fact is that both parties assume some of the risk of the endeavor. Contracting cannot eliminate project risk; project risk can simply be made manageable by transference to a lower risk supplier. For the project manager, the primary residual risk, once the contract is in place, is performance failure on the part of the supplier. The supplier may run into unforeseen technical problems, experience business failures elsewhere that affect the project, or be subject to external threats such as changes in regulations or uncontrollable acts of God. Of course, depending on the type of contract selected, the project manager may choose to retain some or most of the cost risk of the SOW and only transfer the risk of performance to the supplier.

The supplier is on the receiving end of the risk being transferred out of the project. If the supplier is competent and experienced, and has the staff, tools and methods, facilities, and financial backing to accept the SOW, then the supplier's risk is minimized and the contract is a viable business opportunity for the supplier. Further, as mentioned above, the project manager may elect to retain the cost risk and thereby transfer only performance risk to the supplier. But, of course, in all contracting arrangements, the project is the supplier's customer. Customers in a contracting relationship are a source of risk. The project (customer) could breach the contract — by failing to provide specified facilities, information, technical or functional assistance — or could fail to pay or could delay payments.

Both parties seek to minimize their risk when entering into a contract. The supplier will be inclined to identify risks early enough so that provisions in the contract can cover the risks: more money, more time, and assistance in various forms. The project team will be inclined to seek performance guarantees and the means to reward upside achievement or punish downside shortfalls. Each party invokes its risk management plan when approaching a contract opportunity.

Contracts used to convey the SOW from the project to the supplier fall into two broad categories:

In addition to the FP and CP categories that broadly define which party has the cost and scope risk in the arrangement, there are categories for handling the amount of profit that a supplier can make on a contracted scope of work:

The Mathematics of Project Contracts

Mathematical formulas enter the picture when the project manager seeks to dollar-quantify the risk transferred or retained by a contracting activity. Each contract type, whether FP or CP, has a set of mathematical parameters. Table 9-1 provides a summary of the major contract types and the principal financial parameters for each. In the following paragraphs, we will present examples of how these parameters are applied to various contracts. Let's begin with FFP.

Let us move to another form of FP contract, one with an incentive fee, called FPI (fixed price incentive). In an incentive fee arrangement, some of the cost risk is retained by the project, but the supplier is given the opportunity to earn more or less fee commensurate with performance. There are several financial parameters in the FPI calculation.

In this example, the facility is ready in time with all required features and functions. Actual cost is denoted AC, the contractor's share is denoted SRc, and in this example SRc is equal to 20%.

The FPI formula is:

Case 1. The supplier announces that the actual cost was only $80,000, $5,000 below target cost; the supplier is paid according to the formula

It is instructive to understand what supplier cost, adjusted for incentive sharing, exactly equals the risk cap of the project. For this case, the contract situation has reached the point of total assumption (PTA). Costs above the cost at PTA are borne exclusively by the supplier, as shown in Figure 9-1. Below the PTA, costs are shared by the project according to the sharing ratio. The cost at PTA is defined by the formula 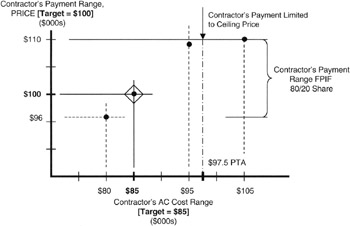 Let us look at the CP contract vehicle and see how the project manager's cost risk is handled. Recall that the CP contract is primarily applied in situations where scope is indefinite and a cost estimate cannot be made to the precision necessary for an FP contract. In all CP contracts, the cost risk (as different from the fee) is largely retained by the project. On the other hand, the fee can either be fixed (no risk to the project) or made an incentive fee, usually on cost. With an incentive fee, the project assumes some of the risk of the total fee paid.

The simplest example of CP contracts is the CPFF (cost plus fixed fee), wherein the contractor is reimbursed cost [2] and receives a fixed fee that is negotiated and set before work begins. [3]

Scenario: A software program is to be developed for which the estimated cost is $100,000. A fixed fee of $8,000 is negotiated before the work starts. The estimated ROC is 8%. What is the contractor paid under the following cases?

To reduce the risk to the project, the project manager decides to create an incentive on cost such that on a 70%/30% share ratio, the contractor participates in any cost savings. Let's see how this might work in the example just discussed.

Now compare the two CP examples to see how the risk to the project manager changed with the introduction of the incentive fee on cost ($000). The cases are illustrated in Figure 9-2: 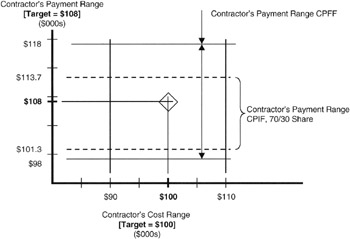 A commonly employed contract vehicle for obtaining the services of temporary staff or to engage in highly speculative R&D is the time and materials (T&M) contract. The usual form of this contract is that the time charges are at a standard and fixed rate for a labor category, but there may be many different labor categories, each with a different labor rate, that are chargeable to the contract. Nonlabor items for all manner of material, travel, subsistence, and other things are charged at actual cost, or actual cost plus a small percentage uplift for administrative handling.

The T&M contract is somewhat of a hybrid, having FP rates but CP materials. In addition, the total charges for labor are wholly dependent on how much of what kind of labor is actually used in the contract. The T&M contract shares the CP problem of no limit to the dollar liability of the project. The contractor need only provide a "best effort" toward the SOW. There is no fixed or incentive fee. The fee is fixed on a labor rate, but the total fee paid is dependent on what labor rates are employed and how much of each is used in the performance of the tasks on the work breakdown structure.

[2]In cost-reimbursable contracts, the contractor's costs consist of three components: direct costs of performance for labor and material (nonlabor) applied exclusively to the contract; overhead costs attendant to the direct costs, usually for managers, buildings, general supplies like pencil and paper, utilities, and so forth; and general and administrative costs (G&A) that cover marketing and sales, general management, finance and accounting, independent R&D, and human resources. Overhead and G&A are applied through multiplying the direct costs by a rate that recovers the overhead and G&A proportionately. For instance, if the overhead rate is 110% and the G&A rate is 35%, then for every direct dollar of cost, the project is charged $1.10 additional for overhead and $0.35 for G&A, making the burdened cost to the project of a direct dollar of cost equal to: $1 direct + $1.10 overhead + $0.35 G&A = $2.45.

Table 9-2 provides the highlights of this chapter.