In this chapter, Molly will write a new script that she will then execute every 24 hours using the Windows Task Scheduler. This script, once executed, will be responsible for running each of the report and log analyzer scripts sequentially. As you go through this chapter, you will learn why Molly chose to create a scheduling script instead of simply setting up each of the report and log analyzer scripts as independent scheduled tasks. You will also learn how to work with the Scheduled Task Wizard.

Now that Molly has finished writing and testing each of the report and log analyzer scripts, she needs to set up their automated execution. To accomplish this task, she plans on using the built-in Task Scheduler service. Molly has decided to use the Scheduled Task Wizard to define the execution schedule for report and log files.

Molly has learned that in order for her scripts to run with the appropriate security permissions and privileges when they execute, she will need to set up a special user account, which she calls a service account, and then associate that account with her scheduled tasks. Molly has already set up a new user account to be used to run any scripts that need to execute on an automated time schedule. She named this account ScriptSchlr and set it up as a local administrator account on the Windows 2000 Server where the order/inventory system resides.

Creating a Scheduled Task for Each Script

Molly has discovered that in order to set up the scheduled execution of each script individually, she will have to repeatedly run the Scheduled Task Wizard and associate each individual script to run using the ScriptSchlr account. Although not a difficult task to perform, Molly is concerned about the long-term maintenance of these scripts and of the ScriptSchlr account.

Even though she created the ScriptSchlr account with a password that does not expire, Molly knows that she will have to manually change its password at least once every six months in order to comply with the company's IT audit policy. This means that every six months, she will have to remember to not only change the ScriptSchlr account's password but also to go to the Scheduled Tasks folder and modify the scheduled task for each report and log script. This introduces the possibility that she may make a mistake and mistype the password for one or more scheduled tasks when modifying its schedule.

To simplify things and to limit the potential for mishap as much as possible when she has to change the ScriptSchlr account's password, Molly has decided to create a new script called MstrSched.vbs. This script will take responsibility for sequentially running each of the report and log analyzer scripts, as depicted in Figure 19.1. 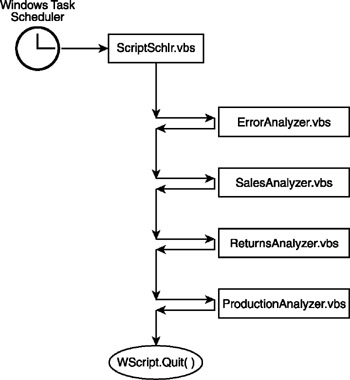 Figure 19.1: Automating the execution of multiple scripts from a single VBScript

This way, Molly only has to configure one scheduled task in order to set up the automated execution of all her report and log analyzer scripts, and she will only have to modify the account password for one scheduled task every six months.

After spending some time looking through the Windows Script Technologies help file, Molly came across the Run() method. This method belongs to the WshShell object and provides the ability to execute a program or script as a new process. It also provides the ability to wait on a child script run using the Run() method to finish executing before allowing the calling script to continue its execution.

In order to ensure that the Run() method will work as she thinks it should, Molly decides to perform a quick test and writes the following script.

When Molly executed her test script, she saw the first Notepad window appear. To verify that her VBScript was waiting in the background for the Notepad application to be closed, she opened the Windows Task Manager utility and verified that the script was still executing, as shown in Figure 19.2. 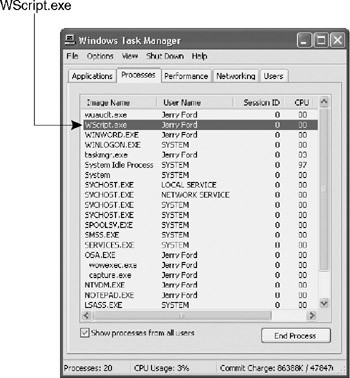 Figure 19.2: Verifying that the VBScript is still executing as a background task

Because she ran the script from the Windows desktop, it was processed by default using the WScript.exe execution host. Although the script itself does not appear in the list of active processes displayed by the Task Manager utility, the presence of an active WScript.exe execution host—when she knows that no other scripts are currently executing—is sufficient for her to infer that her test script is still running in the background. By leaving the Task Manager utility visible as she closes the first and second instances of the Notepad application, Molly is able to witness the termination of the test VBScript.

Setting Up an Intermediary Scheduling Script

Now that Molly is confident that she can use the WshShell object's Run() method to enforce the sequential execution of the report and log analyzer scripts, she begins work on developing the MstrSched.vbs script. To complete the development of this script, Molly will also have to learn how to work with a number of new built-in VBScript functions, as discussed in the following sections.

Creating Logic to Limit When the Script Can Execute

The syntax of the Date() function, which returns the current system date, is outlined below.

When executed, it returns the current system date in the form of mm/dd/yyyy, as demonstrated below.

When executed, the previous VBScript statement displays a pop-up dialog box, as demonstrated in Figure 19.3. 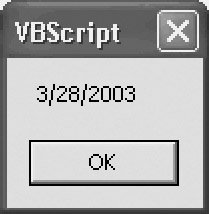 Date represents any expression that specifies a date. Therefore, by wrapping up the Date() function inside the Day() function, as shown below, you can easily determine the current day of the month.

The MstrSched.vbs script is very basic in its design. Given the script's relatively simple role and her tight project development schedule, Molly elected not to spend a lot of time on it or to give it too many bells and whistles. For example, she did not see the need to externalize its settings, nor did she add extra logic to subroutines that accept arguments in order to validate the receipt of any arguments or their validity.

The script's Initialization Section, shown below, enables the strict interpretation of variable names and error checking. This section also defines and instantiates the WshShell object.

The Main Processing Section, shown below, begins with a series of four procedure calls to a subroutine named RunScript(). This subroutine accepts one argument, the name of a script to execute. Each of these four statements passes the RunScript() subroutine a different script name. Because the MstrSched.vbs script will be run daily, these four scripts will always be processed and their execution will occur sequentially. The next several lines in the Main Processing Section are designed to provide for the monthly execution of the ArchiveManager.vbs script. An If statement is used to execute the Day() and Date() VBScript functions in order to ensure that the Archive Manager.vbs script will only be executed on the first day of the month. Finally, the last statement in this section uses the WScript object's Quit() method to terminate the script's execution.

The RunScript() subroutine, shown below, consists of three statements. The first statement identifies the name of the subroutine and defines the procedure's input argument. This argument represents the name of a report or log analyzer script and is used by the Run() method to specify the name of the script to be run. Each script run by this subroutine runs as a background task. In addition, this script will wait for each of the scripts that it calls to complete before returning processing control back to the statement that called it.

The WriteToEventLog() subroutine, shown below, uses the WshShell object LogEvent() method to store a message event in the Windows application event log. This way Molly can verify the execution of the script by examining the system log, which she can do remotely from her Windows XP Professional desktop using the Event Viewer snap-in found in the Computer Management console.

The entire VBScript is assembled below. When executed, it will run each of the report and log analyzer scripts sequentially. In addition, on the first day of each month it will run the archive management script.

Now that her script has been written, Molly needs to create a scheduled task to run it every morning, which she has decided to do at 4:00 A.M. The reports are generally ready for processing at midnight of each day and the nightly backup job that runs next on the server is typically finished at 2:00 A.M. Molly figures that by adding an additional two hours, she will be able to run her scripts without having to worry about whether the reports are ready or if the backup job is still processing.

Molly thought about creating another VBScript to set up the scheduled task for the MstrSched.vbs script. However, given that this is a one-time setup task, she decided that it was not worth the effort of writing another script just for this task. Instead, she will use the Scheduled Task Wizard as outlined in the following procedure.