This chapter begins a new project case study. In this project, you'll observe as Molly Masterson develops a new centralized report management station for the order/inventory system at Intuit Mechanical Tools. Through the completion of this project, you will gain further experience in automating many of the tasks that were covered in the previous project. In addition, you will learn how to automate a number of new tasks, including:

It has been one month since Molly finished the development and deployment of her order/inventory report and log analyzer scripts. Since that time, an exciting new development has occurred at Intuit Mechanical Tools. Last week, the company was awarded a five-year contract with the local state government that will require it to almost double its production output. The first orders for this new contract will begin arriving in a week. Because this new contract was somewhat of a surprise, everyone at Intuit Mechanical Tools has to scramble in order to get things ready.

As a short-term solution to handling the increasing IT processing workload, the company has purchased a new Windows 2000 server and plans to install the order/inventory system on it. This server will then be used to handle all incoming sales and returns originating from the new government contract. Meanwhile, the current Windows 2000 server will continue to process all sales and returns from all current customers. At a later date (once more programmers have been hired), the company will work toward modifying the order/inventory system and consolidating all of the data managed from both the Windows 2000 servers. This means that a number of departments within Intuit Mechanical Tools will have to work harder in order to consolidate sales, returns, and production information from two different sources.

As a result of her success in completing her last project, the computer operations department has requested that Molly develop an automated process that will retrieve copies of the summary reports from both Windows 2000 servers and store them on a dedicated Windows 2000 Professional workstation located within the operations control center. In addition, the operations department would like for Molly to automate the processing of the summary reports from both servers and to create a single consolidated report, for which they would like to keep a rolling three-month archive.

The first step that Molly took upon beginning this new project was to sit down with several members of the operations staff to determine exactly what they were looking for in regards to the creation of a consolidated summary report. At this meeting, she was asked to develop a daily report based on the following sample report that operations had manually created.

The report represents information extracted from the summary reports that will be generated on both Windows 2000 servers. The current Windows 2000 server is named Serv0001. The new server, which is still being configured, will be named Serv0002. The report itself is not substantially different from the summary reports already generated locally on the servers.

For starters, this new master consolidated summary report is still organized into four sections. The Errors: section now reports on errors from both Windows 2000 servers. A new field will need to be inserted that specifies the server from which the error was reported, in abbreviated form (Sr1 for Serv0001 and Sr2 for Serv0002).

The data presented in the Sales summary: and Return summary: sections is broken down into two sets of data. The first set of data lists government sales or returns collected from the summary reports on Serv0001, and the second set of data represents sales or returns data collected from the summary reports on the Serv0002 server for all other customers.

Finally, the information presented in the Daily Production Summary section presents totals collected from both servers.

After meeting with the operations staff, Molly returned to her desk and wrote up a list of project requirements, which she then e-mailed to both her manager and the operations manager for approval. This list is shown below.

By requiring that both her manager and the operations manager confirm their acceptance of these requirements, Molly hopes to ensure that the new automation system she'll be developing will meet the needs of the operations department. In addition, by formalizing project requirements up front and getting everyone's approval, she can prevent feature creep (that is, the ad hoc addition of new requirements during the development of the project). Once approved, any changes to the project's requirements will have to be addressed at a later date. This will help to ensure that Molly does not miss her project deadline by having to provide for additional project requirements that she had not planned for.

As part of her preliminary design and to help management and the operations staff better understand the overall scope of the project, Molly drew the sketch shown in Figure 21.1. 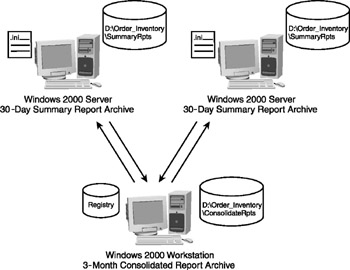 Figure 21.1: An overview of the different components involved in developing a master consolidated reporting system

As the sketch shows, Molly is planning on creating a centralized management workstation by copying the summary files from each Windows 2000 server and storing them on the Windows 2000 Professional workstation. The master consolidated summary reports will be stored on this workstation, as well.

For her own clarification, she depicted the INI files on each of the remote Windows servers where she stores VBScript reports and log analyzer configuration settings. Since everything is working well on the remote Windows 2000 servers, and for the sake of expediency, she plans to keep the INI files in place on the remote servers. However, she has decided to use the Windows 2000 registry on the Windows 2000 Professional workstation as the central repository for all the configuration settings for the scripts that she will develop as part of this new project.

Once she received formal approval of the project requirements that she had distributed and answered everyone's questions, Molly began work on a high-level design. Once again, she decided to use VBScript and the WSH and to tackle this project by developing a collection of small scripts, rather than trying to write one large all-inclusive program.

Molly ultimately produced the following list of tasks as shown in Table 21.1, each of which she plans to accomplish with an individual VBScript.

In addition to writing these scripts, Molly will need to set up their scheduled execution. Completion of this task will also include the one-time creation of a special service account on the Windows 2000 Professional workstation in order to facilitate the execution of scheduled tasks.

Rather than embedding script settings within each VBScript or storing them in one or more INI files, Molly has decided to learn how to store them within the Windows registry. This way her scripts will run faster, because they will not have to perform any file I/O in order to retrieve their settings, and she won't have to manually edit her scripts and risk an accidental typo when modifying script settings. In fact, using the Regedt32 utility supplied with Windows 2000 or Windows XP, she'll be able to remotely modify registry settings for the scripts from the comfort of her own desktop, as demonstrated in Figure 21.2. 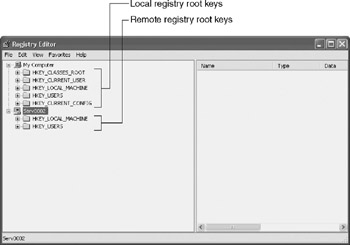 Molly is still in the process of determining exactly which types of configuration data she will externalize from her scripts and store within the Windows registry. She does know that she plans to create a key under the HKEY_LOCAL_MACHINE root key called Intuit. Under this key she will create a subkey called VBScripts, and within this subkey she will create one more key called MstSumRpts. Within the MstSumRpts subkey, she will store all the configuration settings for each of the VBScripts that will run on the Windows 2000 Professional workstation.

In order to develop the setup script that will create the registry keys and store her script's configuration settings, Molly will need to learn how to work with the following WshShell object methods:

In order to remotely connect to the shared folders where the summary reports are stored on each Windows 2000 server, Molly will need to learn how to work with the WshNetwork object. This object provides access to properties that contain network information and to methods that allow you to connect to network drives and printers. In particular, Molly will have to learn how to work with the following WshNetwork object methods:

The processing of the summary reports collected from the two Windows 2000 servers will be performed in much the same way that the report and log analyzer script processed the four report and log files described in Chapter 18, "Developing Script Log Analyzers." However, there are some differences. For one thing, Molly will have to add a new column to the Errors: section when writing the consolidated summary report in order to identify on which server each error occurred.

Another new requirement of the consolidated summary report is the accumulation of production inventory totals at the end of the report. This accumulation of totals will require the VBScript to match up line items based on matching part numbers, in order to calculate the total inventory on hand for each item.

In order to develop the VBScript that produces the consolidated summary report file, Molly will need to use each of the following FileSystemObject object methods:

The last VBScript that Molly will create for this project is one that manages three separate file archives, as outlined below.

Molly will use the Windows Task Scheduler service to automate the execution of this script on a monthly basis. Because the scheduling of this script is a one-time task that only needs to be performed on the Windows 2000 Professional workstation, Molly will manually set up its scheduled execution using the Scheduled Task Wizard.

In order to automate the execution of the archive management script, Molly will have to work with the following FileSystemObject object methods:

Molly also plans to provide this script with the ability to notify the operations staff when it has completed its execution and the consolidated summary report is ready for printing. Notification techniques implemented by this script will include the posting of messages to the Windows 2000 Professional application event log and the creation of pop-up messages on the Windows 2000 Professional workstation. In order to perform these two tasks, Molly will have to use the WshShell object's LogEvent() method and the Windows Net Send command.

In this chapter, you were introduced to a new project case study. You were provided with an overview of the information that Molly collected from the operations department, as well as the list of project requirements. A preliminary high-level design for the project was developed, and the major VBScript language constructs that will be required to develop each of the VBScripts that make up this project were briefly outlined and explained. In the four chapters that follow, you will get the chance to work on the development of all of the VBScripts.