VBScript and the WSH

In this chapter, you will learn about the objects, properties, and methods provided by the WSH. Later, you will learn how to use these objects to access and manipulate a host of Windows resources. This chapter will also demonstrate how to create scripts that can receive and process arguments passed at run time. Finally, you'll learn how to create a new kind of script file using XML (Extensive Markup Language) that will allow you to combine two or more separate scripts, written in different scripting languages, together into one new Windows Script File.

At the heart of the WSH is its core object model. The objects that make up this model provide direct access to the Windows resources that they represent. In total, the WSH core object model is made up of 14 objects. These objects and their relationship to one another are depicted in Figure 9.1.

Figure 9.1: The WSH core object model is made up of 14 individual objects

Table 9.1 provides a list of the other 10 objects that make up the WSH core object model and a list of object properties or methods that are required to instantiate them.

There are too many WSH objects to cover them all in a single chapter. Therefore, this chapter will be limited to providing you with a WSH object reference, while offering a few examples of how to work with some of the WSH objects. The remaining chapters of this book will give you the opportunity to work with many of the properties and methods belonging to the objects shown in Table 9.2.

The WSH core objects provide access to dozens of different properties. Table 9.3 lists each of these properties.

As an example of how to work with WSH object properties, review the following VBScript. In this script, the properties belonging to the WshNetwork object are referenced in order to collect network information.

This script begins by defining two variables, WshNtwk and strDisplayText. WshNtwk is then used to instantiate the WshNetwork object, as shown below.

As you can see, both the Set statement and the WScript object's Create-Object() method are required to set up an instance of the WshNetwork object. Once instantiated, you can reference any of the object's properties and methods. Next, the script executes a procedure called DisplayNetInfo(). This subroutine contains two statements. The first statement creates a display string using the strDisplayText variable and the following WshNetwork properties:

The second statement in the DisplayNetInfo() subroutine displays the display string as demonstrated in Figure 9.2. Finally, control returns to the Main Processing Section, where the WScript object's Quit() method is used to terminate the script's execution.

As an example of how to work with WSH object methods, examine the following VBScript. In this VBScript, methods belonging to the WshShell object are used to set up a mapped drive connection to a network folder.

Next, the Main Processing Section executes the MapDrive() procedure, passing the drive letter and the address of the network folder, as shown below.

The MapDrive() subroutine receives the arguments passed to it and assigns them to two new variables. It then uses the WshNetwork object's MapNetwork-Drive() method to establish the drive mapping. Finally, control returns to the Main Processing Section, where the WScript object's Quit() method is used to terminate the script's execution. Figure 9.3 shows how the mapped network drive appears in the My Computer dialog box. 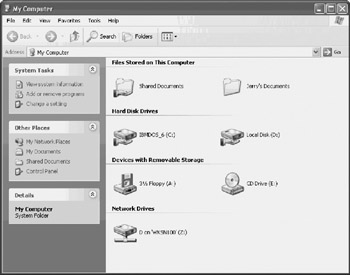 In all the scripts that you have seen thus far, data has been either hard coded into the scripts as constants, variables, and arrays or collected interactively from the user via pop-up dialog boxes. Scripts also frequently receive data to process by having that data passed to them as arguments at run time. For example, you might set up one script to call another script and use the output produced by the first script as input for the second script.

Alternatively, you might pass arguments to a script from the Windows command prompt. For example, the following command would execute a script name TestScript.vbs and pass it three arguments:

What happens next depends on the script. For example, a script receiving log, txt, and doc as input might use these arguments to build a list of files that should be processed in some manner.

Scripts have to be designed to process any argument input that may be passed to them. This can be accomplished using the properties belonging to the WshArguments object, as demonstrated in the following example.

The first thing that this VBScript does is to define a variable and use it to instantiate an instance of the WshArguments object, as shown below.

In the script's Main Processing Section, the script then uses the WshArguments object's Count property to ensure that at least one argument was passed to the script, in which case the ProcessArguments() function is called. Otherwise an error message is displayed and the WScript object's Quit() method is executed, terminating the script's execution.

The ProcessArguments() function starts by adding a heading to a display string, as shown below.

Next it uses a For…Next loop to iterate through the list of arguments passed to the script. The WshArguments object stores arguments in an indexed list beginning at zero. The loop begins at zero and spins until WshArgs.Count – 1 (for example, if five arguments are passed, the index will begin at position 0 and end at position 4). The contents of the display string are modified upon each iteration of the loop by adding the value of each argument to the string based on its index number as specified by the variable i (for example, WshArgs.Item(i)). 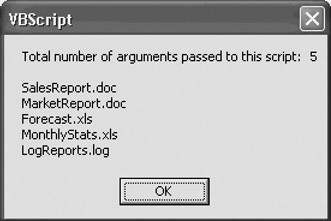 Figure 9.4: Processing arguments passed to a VBScript at run time

The WSH provides programmers with a robust scripting environment that includes access to a common set of objects. These objects provide access to the Windows resources that they represent by means of the properties and methods. One of the strengths of the WSH is that it provides this same level of access regardless of the scripting language being used by the programmer.

Microsoft ships the WSH with VBScript and JScript, but third-party WSH-compatible scripting languages have been made available that include Perl, Python, and Rexx. The WSH does not stop there. In addition to allowing you to use the scripting language of your choice, it provides you with the ability to combine two or more scripts, including scripts written using different languages, into a single script known as a Windows Script File. Windows Script Files are plain text files that are saved with an .wsf file extension.

The WSH uses a subset of XML to create Windows Script Files. XML is a markup language that is syntactically similar to HTML. XML tags are used in Windows Script Files to identify or mark the components that make up the file. For example, every script contained in a Windows Script File is enclosed within a pair of tags. The WSH currently provides support for version XML 1.0.

XML is a case-sensitive markup language. It has a strict set of rules that must be followed when formatting tags. Unlike the HTML markup languages, you cannot get away with excluding required closing tags. The remainder of this chapter is dedicated to demonstrating a number of commonly used XML tags, as outlined in Table 9.5.

version specifies the required XML version. As of the writing of this book, the current version of XML is version 1.0. standalone specifies a Boolean value indicating whether or not the script includes a reference to an external DTD (Document Type Definition). The DTD is currently an unsupported WSH feature. However, if you wish, you may include it. If you choose to do so, then you must specify its value as Yes. The tag does not have a closing tag.

The purpose of the tag is to allow the programmer to enforce a stricter interpretation of XML statements within Windows Script Files. For example, this tag strictly enforces case sensitivity. In addition, it requires all attribute values to be enclosed within single or double quotes.

The following example demonstrates the use of the tag within a Windows Script File.

The tag is an optional tag that allows you to enable or disable error reporting and debugging. The tag does not have a closing tag. Its syntax is shown below.

The following example demonstrates how to enable both error reporting and script debugging within a Windows Script File.

The and tags provide the ability to place comments within Windows Script Files. The and tags can also be used to spread comments out over multiple lines. The syntax for the and tags is shown below.

The following example demonstrates the use of the and tags.

The tags are used to identify the beginning and the ending of individual scripts within a Windows Script File. Their syntax is shown below.

The following example demonstrates the use of the tags to embed a VBScript inside a Windows Script File.

The next example demonstrates how to set up a reference to an external VBScript that is located in the same folder as the Windows Script File.

As you can see, this job executes three scripts, two written in VBScript and one written using JScript. The second VBScript defined within the job represents an external script.

The and < package> Tags

In order to place more than one job within a Windows Script File, you must first specify and tags and then embed the jobs within these tags. The syntax for the and tags is shown below.

The following example demonstrates how to use the and tags to add three jobs to a Windows Script File.

The first job is named Job_A. It contains a single VBScript. The second and third jobs are named Job_B and Job_C, respectively.

The and < resource> Tags

When specified, the and tags must be placed within the and tags. The syntax for these tags is shown below.

id is used to specify the name of a constant. The value assigned to the constant is specified by typing it between the opening and closing tags, as shown in the following example.

In this example, the value of the constant cTitleBarMsg is displayed by a MsgBox() function using the WSH getResource() method. This built-in WSH method is designed to retrieve the value of constants defined within and tags.

For example, the following statement could be used to run the first job defined in a Windows Script File called SampleScript.wsh using the WScript execution host.

Since the first job defined in the script is to be executed, there is no need to specify its assigned job ID. If the Windows Script File contained a second job that was assigned a job ID of Job_B, then you could run it using the following command:

In this chapter, you learned about the objects that comprise the WSH object model. In addition, you were presented with a complete listing of the properties and methods associated with these objects and examples that demonstrated how to incorporate the use of WSH objects into your VBScripts. You also learned how to create and execute scripts that can accept and process arguments passed at run time. Finally, you learned how to develop Windows Script Files using XML. This included a review of commonly used XML tags.