In this chapter, you will examine how VBScript interacts with its environment by working with objects. This will include an examination of VBScript's built-in and run-time objects as well as a complete listing of the objects' associated properties and methods. In addition, you'll get a brief overview of the importance of browser- and WSH-specific objects. You will also learn how to create your own custom objects replete with their own sets of properties and methods.

By itself, VBScript has only limited capabilities. It cannot access HTML page elements, the Windows file system, or other system resources. VBScript supplies only a small collection of built-in objects. These objects provide VBScript with the ability to react to errors and to parse and extract data from strings. VBScript's built-in objects are listed in Table 7.1.

As Table 7.1 indicates, VBScript's built-in collection of objects provides access to a number of different properties. Table 7.2 lists each of these properties and describes their purpose.

VBScript's built-in Err and RegExp objects provide access to a small number of methods. Table 7.3 lists each of these methods and describes their purpose.

As Table 7.1 shows, VBScript provides a number of built-in objects. These objects provide the ability to perform all of the following actions:

The next several sections cover some of these objects and their capabilities.

You already learned how to work with the built-in Err object back in Chapter 6, "Data Collection, Notification, and Error Reporting." This object provides access to run-time error information by providing access to the following properties:

In addition, this object provides two methods for working with errors:

VBScript provides support for a number of different data subtypes, including strings and dates. VBScript also supports the more complex array data structure. VBScript provides the Class object as a means of creating a customized complex data structure, or custom objects. By creating your own custom objects, you can encapsulate data functions to create new objects, which your VBScripts can then access like any other objects. Creating custom objects provides your scripts with a tool that helps ensure data consistency, because it allows you to define procedures for validating and enforcing object properties and for controlling object manipulation.

Custom objects are created using the Class…End Class statement. The Class object therefore provides a template for defining other objects and their structures. Once defined, these objects can be instantiated just like another object. The syntax for this statement is outlined below.

ClassName represents the name to be assigned to the new object. Statements represent the variables, properties, and methods defined within the object. Methods are established by defining the Sub or Function procedures. Properties are defined by using any of the following statements to manipulate variables defined within the Class…End Class statement:

Variables, properties, and methods can be defined as public (accessible throughout the script) or private (available only within the Class) using the Public and Private keywords. Unless specified, Public is always assumed.

The following example demonstrates how to use the Class object to create a custom object called Customer.

Now that a new object has been defined, you can instantiate it, as shown below.

You can then store a customer's name to the object.

You can then execute the object's DisplayGreeting() method.

Setting Up Initialization and Termination Procedures

The following statements demonstrate how to trigger statement execution based on the occurrence of the Class_Initialize and Class_Terminate events.

Once added inside a Class…End Class statement, these events will automatically execute whenever a new instance of the associated object is created or destroyed.

The RegExp Object and Other Related Objects

Except for the Err object and the Class object, all the rest of VBScript's built-in objects are designed to work with regular expressions. A regular expression is a pattern of text made up of characters and metacharacters. Regular expressions provide the ability to identify patterns and perform complex search and replace operations.

The RegExp object allows you to work with regular expressions in VBScript. To add a RegExp object to your VBScripts, you must first define a variable to represent it and then use the New keyword to instantiate it, as demonstrated below.

The RegExp object has three properties:

In addition, the RegExp object provides a number of methods, one of which is the Replace() method. This method replaces the matching text patterns in a search string. Its syntax is shown in the following statement.

For example, the following statements demonstrate how to use the RegExp object to search a string variable called strQuote and replace an occurrence of the word child.

The previous example replaces only the first occurrence of the specified pattern match. However, you can modify the search pattern as shown below to search for and replace all pattern matches in the search string.

As you can see, a new statement has been added to the example, which uses the Global property of the RegExp property to replace all matching instances in the search string. VBScript also supplies a number of metacharacters that you can use when working with the RegExp object's Pattern property. For example, the following statements perform a pattern replacement using a range of values:

The d metacharacter specifies that any single digit should be used as the replacement string. In the case of this example, the number 8 is replaced with the number 1008. Table 7.4 lists the metacharacters supported by VBScript regular expressions.

The RegExp object provides two additional methods, as outlined below.

The Test() method allows you to check whether a string contains a pattern match. It has the following syntax:

For example, the following statements demonstrate how to use the Text() method to report on the presence or absence of a pattern match:

The RegExp object's Execute() method creates a Matches collection from a search of a regular expression and has the following syntax:

In this example, a Matches collection consisting of three Match objects is created using the RegExp object's Execute() method. Each of these match objects has its own set of associated properties, including the FirstIndex property, which specifies the location in the search string where a match is found. A For Each…Next loop is then used to assemble a display string that shows the location of each pattern match, as shown in Figure 7.1. 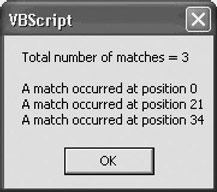 Figure 7.1: Processing the contents of a Matches collection created by the RegExp object's Execute() method

Other Collections of Objects Available to VBScript

Objects Available When Executed in the WSH

When VBScripts are executed by the WSH, they have access to two different sets of objects. One set of objects available to VBScripts executed by the WSH is referred to as the WSH core object model. The objects that make up this object model provide access to a collection of Windows resources, including the Windows desktop, file system, registry, and network resources.

The second set of objects is referred to as VBScript run-time objects. These objects are provided by an external DLL (Dynamic Link Library) named scrrun.dll. They provide VBScript with the ability to access the Windows file system. In addition, the VBScript run-time objects include an object known as a Dictionary object. The Dictionary object allows you to store data in an associative array and to retrieve the data stored in that array using keys instead of an index position as is the case with regular VBScript arrays. VBScript's run-time objects are listed in Table 7.5.

VBScript run-time objects provided by the WSH offer an extensive collection of properties. These properties provide information about the Windows file system and Windows files and folders. Table 7.6 contains a complete list of run-time properties.

All of the VBScript run-time objects, except for the Dictionary object, are designed to work with files and the Windows file system. Use of these objects is covered extensively in Parts III, IV, and V of this book. This section provides a review of the Dictionary object.

In addition, the Dictionary object provides access to the following methods:

Once instantiated, you may then store items in the object along with their associated keys, as demonstrated below.

The first two statements add data to the Dictionary object using the Add() method. The first argument specified is the key that is to be associated with the data, which follows as the second argument. The last statement adds a third piece of data by using the Item() property, thus demonstrating that if you reference a key/item pair that does not exist, VBScript will automatically add it for you.

Once you have populated your Dictionary object with data, you can come back and work with its data. For example, the following statements use the Exists() method to determine whether a key/item pair exists. If it does, then the Item() method retrieves and displays a data element by supplying its associated key.

Removing key/item pairs from a Dictionary object is just as easy as adding them. For example, the following statement shows how to use the Remove() method to delete a data element using its associated key:

Alternatively, if you prefer to delete all the data stored in a Dictionary object, you may do so using the RemoveAll() method, as shown below.

In this chapter, you were presented with a complete listing of VBScript's built-in and run-time objects. In addition to reviewing these objects and their associated properties and methods, you learned how to create your own custom objects. You also learned how to create an associative array using the Dictionary object when developing VBScripts that run with the WSH. Other object models were also discussed, including those provided by Internet Explorer and the WSH.

Persuasive Technology: Using Computers to Change What We Think and Do (Interactive Technologies)