A directed acyclic graph can be used to represent a set of tasks, some of which are prerequisites of others (Figure 15-23). An edge indicates that one task must be performed before another.

Figure 15-23. Dinner involves a number of different tasks, shown in this directed graph. An edge indicates that one task must be performed before another. For example, the oven must be preheated before the bread can be baked. It should be noted that only a programmer would consider this a complete meal. 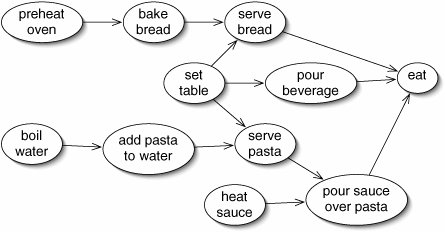 Figure 15-24. When the vertices are arranged in topologically sorted order, all of the edges lead from earlier to later tasks. 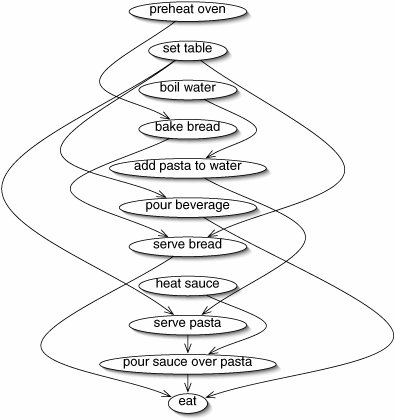 For a second example, consider the game of Pick Up Sticks (Figure 15-25).

Figure 15-26. A game of Pick Up Sticks and the corresponding directed acyclic graph. An edge indicates that one stick overlaps another. A topological sort of this graph would give a valid order for picking up the sticks. 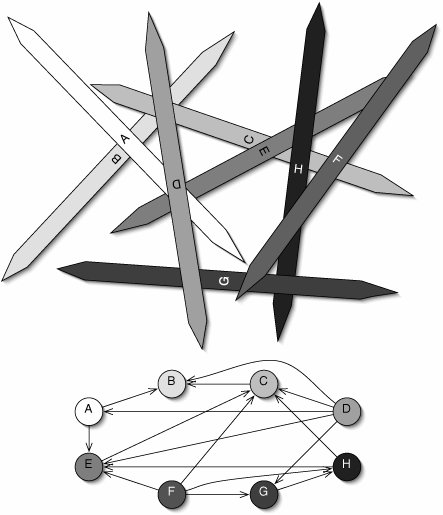 We would like to write a program that, given the information on which sticks overlap which other sticks, determines an order in which they may be picked up. A transcript is given in Figure 15-27.

The heart of this program is the topological sorting algorithm. This algorithm is similar to a series of depth-first traversals, one starting from each vertex, but all sharing the same visited array.

Figure 15-27. Transcript of the PickUpSticks program.

Suppose we do a depth-first traversal starting from some vertex, such as vertex F in Figure 15-26. When we complete this traversal, we have visited everything that can be reached from this vertex. In other words, we have stick F and everything below it. If we add each vertex to the end of the solution list as we visit it, all of the edges will lead backward. If we add these vertices to the beginning instead, all of the edges will lead forward, giving us a topological sort.

Figure 15-28. The topological sort algorithm performs a series of depth-first, postorder traversals. These methods are in the Graph class.

Each vertex is visited exactly once. It takes time in Q(v) to traverse the neighbors of each vertex, so the total running time for topologicalSort() is in Q(v2).

The PickUpSticks program is now just a bit of input and output (Figure 15-29).

We do something unusual on lines 2426 to read several numbers on one line. We read in a line of text, store it in the String line, and then create a new Scanner that reads from that line instead of from the keyboard. We can read ints from this Scanner until there are none left. It wouldn't work to read these directly from the keyboard, because the Scanner would have no way of knowing when the user was done entering numbers.