instead of the much more cumbersome:

We saw in Section 2.1 that Strings are immutable. Once a String is created, it cannot be modified. This makes it dangerous to use == to compare Strings, but allows Java to sometimes save space by not storing redundant copies of identical Strings.

The immutability of Strings sometimes has a cost in efficiency. Consider the toString() method from our ArrayList class in Section 5.3, reproduced in Figure 13-1.

Figure 13-1. The toString() method from the ArrayList class uses Strings.

Every time we use the + operator, a new String must be created and the contents of the old String copied into it. It would be better if we could avoid some of this copying (Figure 13-2). The built-in StringBuilder class allows us to do just this. 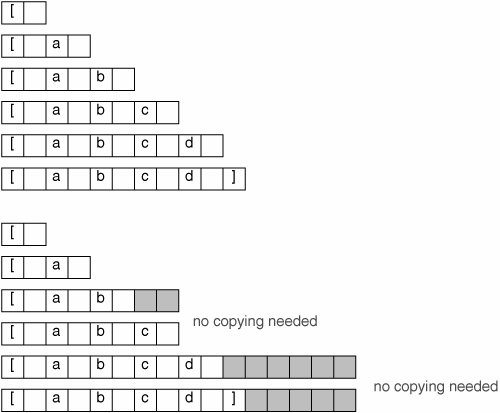 Some of the methods from the String and StringBuilder classes are given in Figure 13-4. There are more methods not listed here; we'll leave the details for the API. The discussion that follows highlights some information that should let us use these classes more effectively.

Figure 13-4. UML class diagram of the String and StringBuilder classes, the Object class, and some associated interfaces.

(This item is displayed on page 354 in the print version) 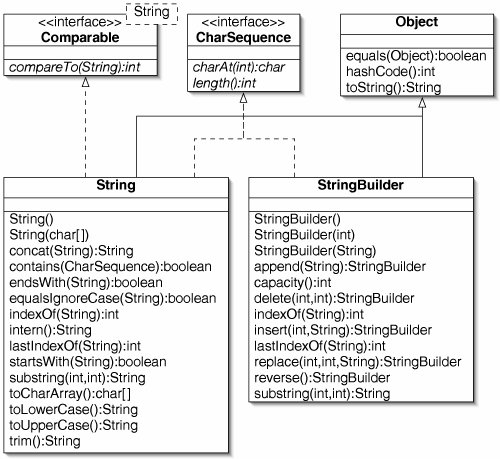 Because instances of the String class are immutable, none of the listed methods of the String class have a return type of void. There would generally be no point in a method which neither returns a value nor modifies the object on which it is invoked. Instead, many of these methods return new Strings.

The contains() method returns TRue if its argument is a substring of this. A substring is a consecutive sequence of 0 or more characters within a String. For example, the invocation

The substring() method, given two arguments start and end, returns the substring from index start up to but not including index end. Thus,

returns characters 3 through 6that is, "quip".

To avoid keeping redundant copies of identical Strings, the String class maintains a pool of instances. If a String expression involving no variables is identical to some instance in this pool, the value of the expression is a reference to the existing instance instead of a new String. If it is not, a new instance is added to the pool. To cause any other String instance to be treated this way, we can invoke its intern() method. Thus, if two Strings a and b are equals(), then

The TRim() method returns a new String with any spaces, tabs, or newline characters removed from the ends. For example,