Note: The term "heap" is used in a completely different way in Chapter 16.

A heap is a binary tree of Comparables with the following special properties:

Figure 14-1. In a heap, each node is less than or equal to its children. It follows that the smallest element is at the root. On the other hand, a node may be lower in the tree than a smaller cousin (compare 6 and 8).

(This item is displayed on page 370 in the print version) 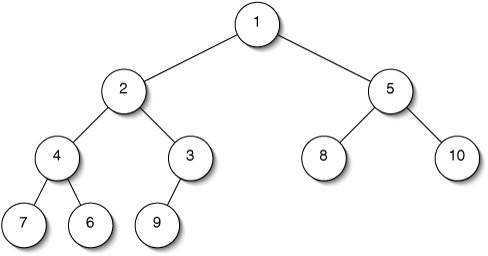 Figure 14-2. A heap can be represented using an ArrayList. The levels of the tree (highlighted by shading) are represented, one after another, in the array. 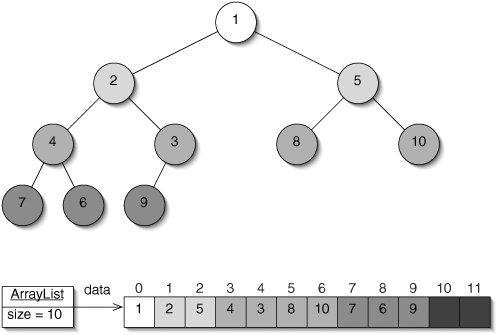 This representation is more space-efficient than a linked one, but how do we find the relatives of a node? We only have to do a little arithmetic.

The basic outline of the Heap class, including methods to find relatives, is given in Figure 14-3.

If we want to add something to a priority queue, we start by tacking it onto the end of the ArrayList. We can't stop there, because the tree represented by this list might not be a valid heap any more. Specifically, the new element might be smaller than its parent. We fix this problem by filtering the offending element up toward the root until it is in a valid position (Figure 14-4).

Figure 14-4. Filtering up in a heap. When a new node is added (top), it is compared with its parent. If it is smaller than its parent, they are swapped (middle). This continues until the new element moves up to its proper place (bottom). 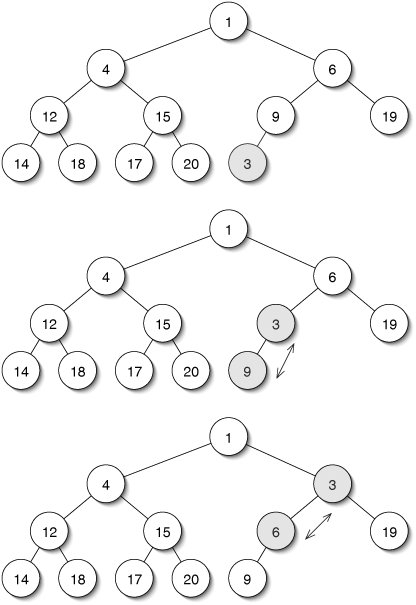 Even in the worst case, this takes time proportional to the height of the tree. Since the tree is perfect or close to perfect, this is in O(log n). The code is given in Figure 14-5.

Figure 14-5. Adding a new element to a priority queue involves filtering it up to its proper place in the heap.

Removing an element from a priority queue is only slightly more complicated (Figure 14-6). We remember the element at index 0 so we can return it later. The element in the last position is then copied over the root and filtered down until it is in a legitimate position. If both children are smaller than their parent, we swap the parent with the smaller of the two.

Figure 14-6. When the root is removed from a heap (top), it is replaced by the last element (second from top). This element is then filtered down to a legitimate position.

(This item is displayed on page 374 in the print version)

This operation also takes time in O(log n). The code (Figure 14-7) is somewhat long because of the three-way comparison between a node and its children.

Heaps are also useful for a sorting algorithm called heapsort. The algorithm begins by copying the data to be sorted into a heap. The filterDown() method is then invoked several times to make the heap valid. Finally, we remove elements from the heap one at a time. Since each removal from the heap returns the smallest remaining element, they are removed in increasing order.

Since we've already laid most of the groundwork, the code for the heapsort() method is remarkably short (Figure 14-8). Lines 79 copy unsortedData, taking time in Q(n). Line 11, which takes time in O(log n), is run no more than n times, for a total in O(n log n). The same is true of line 20. The total worst-case time for heapsort is therefore in O(n log n). Heapsort is a comparison sort (Section 12.4), so we can conclude that the worst-case time is precisely in Q(n log n).

Figure 14-7. Code for removing an element from a priority queue.

Figure 14-8. Heapsort. The constructor on lines 113 is a second, overloaded constructor for the Heap class; the other was in Figure 14-3.

The java.util package contains a PriorityQueue class. The comments for Java's Queue interface are carefully worded to encompass both FIFO queues (Section 4.4) and priority queues. The LinkedList and PriorityQueue classes therefore both extend this interface (Figure 14-9).

Figure 14-9. The java.util.Queue interface is implemented by both LinkedList and PriorityQueue. The add() and remove() methods inherited from Collection each return a boolean value indicating whether the operation succeeded. 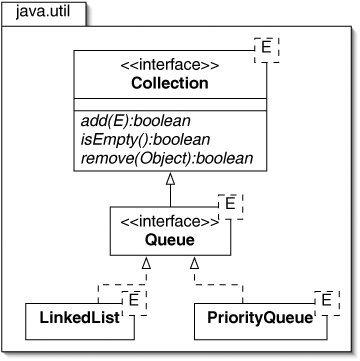