Quicksort (by convention, the name is all one word, capitalized) is another divide-and-conquer sorting algorithm. In merge sort, the dividing was trivial. We simply took the left and right halves of the region being sorted. All of the hard work was done in recombining the sorted pieces by merging. In Quicksort, the hard work is in the dividing and the recombining is trivial.

The process is illustrated in Figure 9-24.

Figure 9-24. Quicksort works by dividing the array into "small" and "large" numbersin this case, numbers less than or equal to 4 and numbers greater than 4. Each section is then recursively sorted. 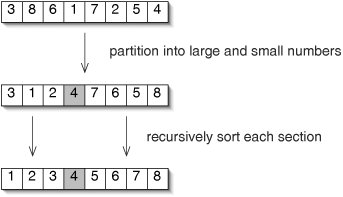 As in merge sort, the primary methods are very short and elegant (Figure 9-25).

Figure 9-25. The methods quicksort() and quicksortHelper().

All of the hard work is done in the helper method partition(). The partitioning algorithm begins by choosing some array element as the pivot. We arbitrarily choose the last number in the region being partitioned as the pivot (Figure 9-26). Numbers less than or equal to the pivot are considered small, while numbers greater than the pivot are considered large. As it runs, the algorithm maintains four regions: those numbers known to be small, those known to be large, those which haven't been examined yet, and the pivot itself.

Figure 9-26. The partitioning algorithm chooses one number as the pivot. Four regions are maintained: small numbers, large numbers, unexamined numbers, and the region containing the pivot. The algorithm's last action is to swap the pivot into place between the small and large numbers. 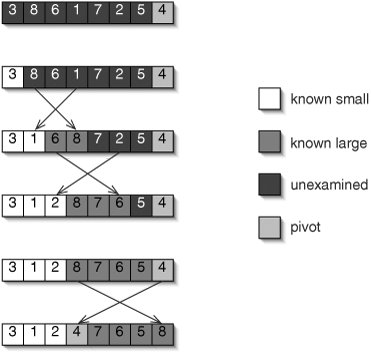 The partition() method and its helper swap() are shown in Figure 9-27.

The number of variables in partition() make it appear complicated, but they are only there to maintain the four regions. Specifically:

Similarly, on line 17, firstAfterSmall is the index of either the first large number or (if there are no large numbers) the pivot. In either case, swapping the pivot into this position is correct.

An invocation of partition() takes time linear in the length of the array being sorted, because there are n passes through the loop. What about quicksortHelper()? Partitioning a region of size n as evenly as possible, we might end up with

images/U230A.jpg border=0> large numbers. We ignore the floor and ceiling by assuming that

Since this is strictly less than the recurrence for merge sort, it is tempting to conclude that quicksort takes time in O(n log n). While this is true in the best case, partition() might not divide the region evenly in half. In the worst case, there might be no large numbers. For example, if the array is already sorted, the number we choose as the pivot is the largest element. There are then n 1 numbers to the left of the pivot and none to the right. In this case, the recurrence is:

The solution to this recurrence is:

While the analysis is beyond the scope of this book, it turns out that Quicksort takes time in Q(n log n) in the average case. Quicksort is therefore better than insertion sort, but not as good as merge sort.

Since it has a low constant factor associated with its running time, and operates in place, Quicksort is sometimes used instead of merge sort when n is not expected to be very large. There are also a number of minor changes (see the Exercises) which can be made to the algorithm to greatly decrease the likelihood of the worst-case running time.

The class java.util.Arrays has several overloaded versions of the static method sort(). The ones for arrays of primitive types use an optimized version of Quicksort that makes the worst-case behavior unlikely. The version for arrays of objects uses merge sort. The difference has to do with the fact that two objects that are equals() may not be identical. For example, two Cards with the same rank but different suits are equals(). If a sort keeps such elements in the same order as in the original array, the sort is said to be stable. Merge sort is stable, but Quicksort is not. Since equal primitives must be absolutely identical, stability is not an issue when sorting primitives.