There is a considerable amount of terminology regarding trees. We will introduce it in the context of the game of Questions (Figure 10-1).

In our implementation, several games are played. The program loses at first, but increases its knowledge after each game. A transcript is given in Figure 10-2.

Figure 10-2. Our Questions program gets smarter with every game. We assume that the vast majority of readers have eaten an apple pie, but not a giraffe.

After a few hundred games, the program gets pretty good at playing Questions. The program's knowledge is stored in a tree (Figure 10-3).

Figure 10-3. The program's binary decision tree at the end of the session in Figure 10-2.

The nodes directly below a node are its children. For example, the two children of "Have you eaten one?" are "an apple pie" and "a giraffe." The most important feature distinguishing binary trees from more general trees (Section 10.3) is that, in a binary tree, no node can have more than two children.

Other family relations follow in the way we would expect. For example, "Can it fly?" is the parent of "a helicopter." Every node in a binary tree has exactly one parent, except for the one at the top, which has no parent. Nodes with the same parent are siblings.

The depth of a node is the number of lines (not nodes!) along the path back to the root. Thus, the root is at depth 0, its children are at depth 1, and so on. A level of the tree is the set of nodes at a particular depth. The height of a tree is the depth of the deepest node.

Figure 10-4. A binary tree with the nodes divided into levels. 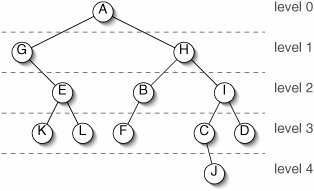 A node's ancestors are itself, its parent, its grandparent, and so on. In Figure 10-4, the ancestors of L are L, E, G, and A. A node's proper ancestors are all of its ancestors except itself.

The number of nodes in a binary tree depends on the height of the tree and on how "skinny" or "bushy" the tree is (Figure 10-6). At one extreme is a linear tree, where every internal node has only one child. At the other extreme is a perfect binary tree, where all of the leaves are at the same depth and every internal node has exactly two children. (Some texts use the word 'complete' rather than 'perfect.')

Figure 10-6. A linear tree (left) and a perfect binary tree (right). Both of these trees are of height 3.

(for a perfect binary tree).

Conversely, a binary tree with n nodes has height between log2(n + 1) 1 (for a perfect binary tree) and n 1 (for a linear tree).

These precise formulae are easy to derive from a few examples. The most important thing to remember is that h

This definition was implemented in the ListNode class in Section 6.1. Recursively defined structures often lend themselves to linked implementations. We define a class BinaryNode that is similar to ListNode. The difference is that, instead of having a single field next referring to the rest of the list, we have two fields left and right referring to the left and right subtrees.

Since we might have trees of different kinds of things, we again create a generic class. The Questions game needs a tree of Strings. Figure 10-7 shows the linked representation of the decision tree in Figure 10-3. 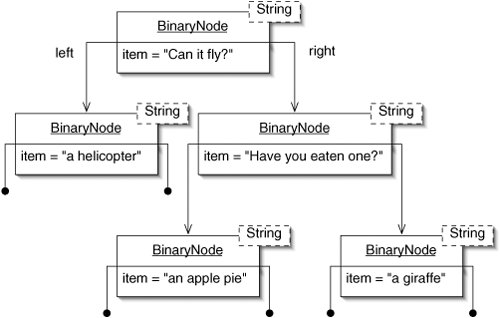 The code for the BinaryNode class is given in Figure 10-8.

Figure 10-8. The BinaryNode class. More methods will be added in Section 10.2.

With this structure in hand, we can now write the Questions game. An instance of the Questions class contains a BinaryNode (the root), which may refer in turn to additional BinaryNodes (Figure 10-9).

Figure 10-9. An instance of Questions contains an instance of BinaryNode, which refers to its children, and so on.

The easy parts of the program are shown in Figure 10-10.

Initially, the program's decision tree consists of a single node, containing the String "a giraffe". The tree expands through learningmore on that in the moment. For now, let's imagine that the tree is more elaborate, as in Figure 10-3.

Every internal node in the tree contains a question and every leaf contains a guess as to what the knower has in mind. The play() method starts at the root of the tree, asking the question (or making the guess) stored there. For now, suppose it's a question. If the player answers "yes," the program repeats the process on the left subtree. Otherwise, it goes to the right. 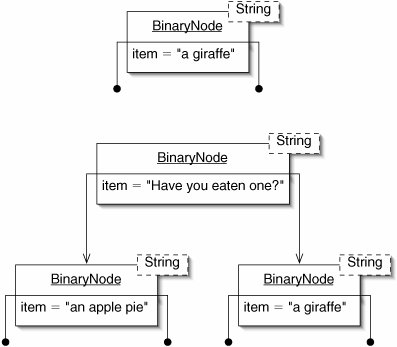