Suppose we have two methods we wish to compare. We have determined that the running time for method A is 10n2 5 milliseconds to process n elements, while that for method B is 100n + 200 milliseconds. (We will discus how to arrive at these expressions in Section 7.3.) Which method should we prefer?

Figure 7-3. Method A is faster than method B for small values of n, but slower for large values.

(This item is displayed on page 187 in the print version) 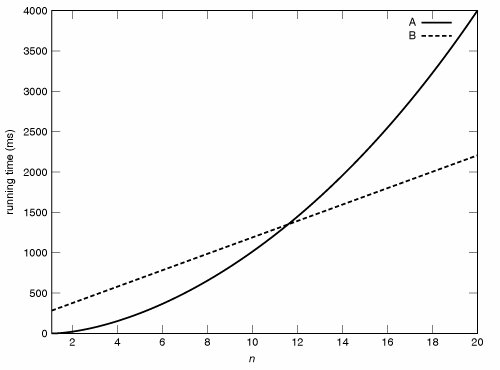 We would prefer to say that one method is faster in general, rather than for some particular value of n. The time differences for small values of n are relatively insignificant. What really concerns us is the asymptotic behavior of the running-time functions: what happens as n becomes very large?

Figure 7-3 suggests that the running time for method A is larger than that for method B. If n is at least 12, B is faster.

Our intuition is correct in this example, but graphs can be deceiving. If we had plotted the graph only up to n = 6 (Figure 7-4), we might have concluded that method A is faster. To be confident in our statement about which method is faster for large values of n, we need a proof.

Figure 7-4. If the graph is plotted at a different scale, method A looks better.

(This item is displayed on page 188 in the print version) 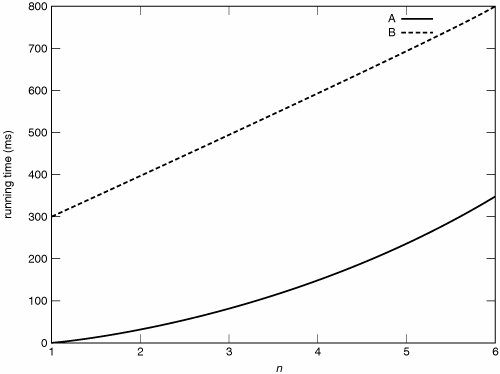 Proof: For any n

Actual running times will depend on a number of factors that don't really concern us, including the speed of the hardware, the quality of the compiler, and the skill of the programmer. We would prefer to make statements about the speed of an algorithm in general, rather than a particular implementation of it. This way, we don't have to redo our analysis if we change programming languages or buy a faster computer.

The thought of doing proofs with all these unspecified constants lying around may be unnerving. Fortunately, there is a huge shortcut. Functions can be classified into orders. (Whenever we talk about orders, we assume that all of the functions involved map nonnegative integers onto nonnegative real numbers and are monotonically nondecreasingthat is, f(n + 1)

n). An algorithm for which the running-time function did not fit into this category would be fairly strange.)

Some common orders are shown in Figure 7-5. We will give a formal definition of an order later in this section.

Two rules go a long way toward identifying the order of a function:

Let's look at some more examples. Given the running-time expressions in Figure 7-6, which algorithm should we use?

Multiplying it out, we find that

Now we are back in familiar territory: Synchronized absquatulation takes time in Q(n2), so it is faster than dynamic inversion (for sufficiently large n).

A final challenge is given in Figure 7-8.

Can we wrangle n! into some form we recognize?

Things don't look good. Notice, however, that this is at least

Remember that functions in the same order can differ by a constant factor. Consequently, a function in O(g) might actually be larger than g. For example, 3n2

We can define these notations more formally. First, f

We've seen n0 before; that's just a threshold so that only large values of n are considered. (In Figure 7-3, n0 was 12.) The constant c is there so that multiplying either function by a constant won't have any effect. Put another way, the definition says that f

O(Q(g) is larger than f for sufficiently large n.

Combining these, we get the formal definition of an order:

Q(kn) are called exponential orders. For k > 0, the orders Q(nk) are called polynomial orders. These fit into the order hierarchy right where we would expect. For example, n5

What is the order of the expression 5n log 5n?

What is the order of the expression

What is the order of the volume of an n x n x n cube? What about the surface area? Answer the same questions for a cylinder of radius n and height n.