It's been a while since we've had a game. The rules of Ghost are given in Figure 14-21.

The key problem for the program is to find a word that starts with a given prefix. This could be done by searching a general-purpose Set, but there is a better way. The entire word set can be represented as a digital search tree (Figure 14-23). Words are represented as paths through the tree. Each child of a node is associated with a letter. If a path corresponds to a word, the node at the end is marked. 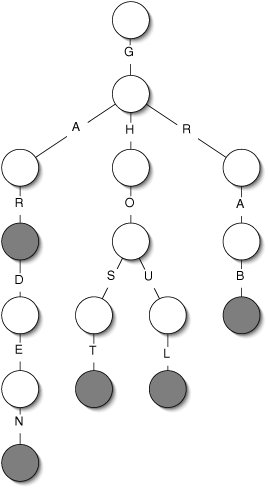 As we play Ghost, we keep track of the current node. Whenever the user enters a letter, we descend to the appropriate child. If there is no such child, the user loses. When we need to pick a letter, we randomly choose a child and the corresponding letter. (Better strategy is explored in Project 14.24.)

The digital search tree is implemented in a straightforward linked way (Figure 14-24). A Map is used to associate letters (Characters) with child nodes.

Figure 14-24. UML class diagram of our Ghost program. An instance of the Ghost class contains a DigitalNode, which contains a Map associating Characters with child DigitalNodes.

The code for the DigitalNode class is given in Figure 14-25. General-purpose interfaces like Map and Set pay off handsomely here. On line 37, we give the full name of java.util.Set to distinguish it from our own Set interface, which is likely to be in the same directory. The DigitalNode class is generic, because we will use it in a different way in Section 17.2.

The easy parts of the Ghost class are listed in Figure 14-26.

Of greater interest is the addWord() method (Figure 14-27). As we go through word character by character (lines 411), we descend to the appropriate child for each letter. When there is no such child, we create one (lines 69). Finally, at the end of the word, we mark the node (line 12).

Figure 14-28. The play() method. Use of DigitalNodes is emphasized.

Since it is nothing more than a hash table lookup, getChild() takes constant average time. This makes a digital search tree an excellent choice when searching for Strings containing a prefix that grows one character at a time.