It should come as no surprise that the author has a fairly large collection of games. A small sampling of games, with some of their properties, is listed in Figure 12-1.

When the author gets together with friends, he often has to answer the question, "Which game shall we play?" Sometimes people want something quick and light that can be played while waiting for others to arrive. Other times, people are ready to settle down for an evening-long brain-burner. If, for example, there are five people and they want to play a strategy game taking 12 hours, the options are Formula Dé, El Grande, and Puerto Rico. Let's write a program to list the appropriate games for any situation.

We could maintain a set of Game objects, each of which has a field for each of the various attributes. A more space-efficient option is to maintain, for each game, a single integer encoding all of the game's attributes (except the title). This representation is called a bit vector (Figure 12-2).

Figure 12-2. In a bit vector, each bit represents a single feature of the game. For example, El Grande can take 2, 3, 4, or 5, players, plays in 12 hours, is of high difficulty, and involves strategy.

If we think of each game as having a set of features, we recognize this as a variation of direct addressing (Section 11.4). For example, the bit vector for Bohnanza represent the set of features:

Bit vectors make it easy to efficiently perform certain set operations, such as intersection and union. For example, if we want to know what Bohnanza and El Grande have in common, we take the intersection of their feature sets (Figure 12-3).

Figure 12-3. The bitwise intersection of two bit vectors tells what elements two sets have in common. In the resulting bit vector, the bits that are on in both of the others are on. Here, Bohnanza and El Grande can both handle 35 players.

Figure 12-4. If a game's intersection with the situation equals the situation, the game is suitable. It does not matter that this situation does not specify a desired difficulty level.

In Java, we can represent a bit vector with up to 32 features using an int. The bit vector

represents the number 4 in binary. In our example, this bit vector also represents a 3-player game, with the extra bits at the left being ignored.

In binary, the number 2i is represented by a bit vector with only the ith bit from the right turned on. Put another way, it is a 1 with i zeroes after it.

Java has an operator << for shifting a pattern of bits to the left a given number of spaces. If we want a bit vector with only the fifth bit turned on, we use the Java expression:

we use the Java expression:

Manipulating individual bits like this manually would be incredibly tedious and error prone. Instead, we define constants (Figure 12-5). The static method playerRange() is provided because many games can accept a range of player numbers.

Now we can specify the bit vector for Lord of the Fries simply as:

Java's bitwise operators are listed in Figure 12-6. Almost all modern processors have built-in instructions for these operations, so they are extremely fast.

Figure 12-7 provides some examples of these operations.

A couple of things to watch out for:

We now know more than enough to write the GameCollection class (Figure 12-8). The only nonconstant field is games, which maps Strings (game titles) to Integers (bit vectors).

The loop on lines 2731 iterates through the entries in this map. Each value of game is of type Map.Entry, so we can extract the key (title) or value (attribute bit vector) of the entry as needed.

A main() method which adds all of the games in Figure 12-1 and then invokes findGames() is shown in Figure 12-9.

Figure 12-9. After adding a bunch of games to the database, we can ask for one fitting certain constraints.

If we want to keep track of a set with more than 32 potential elements, we can use the BitSet class in the java.util package (Figure 12-10). A BitSet represents a long bit vector as a series of binary numbers. It performs arithmetic (similar to that we'll do in Section 12.3) to find the right bit in the right number. Like an ArrayList, a BitSet can also grow as necessary. Of course, since BitSet is an encapsulated class, we don't have to think about the details; we can simply treat it as an arbitrarily long bit vector.

Figure 12-10. UML class diagram showing some of the methods in the java.util.BitSet class. 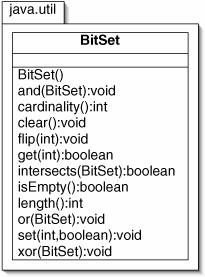 The other methods are self-explanatory, given that int arguments specify indices in the BitSet. See the API for additional details and a few other methods.