We now have all the tools we need to implement the Stack and Queue interfaces from Chapter 4.

The ArrayStack class, which implements the Stack interface, is very similar to Deck. It contains an array data and an int size. When we create a new ArrayStack, data has room for one element and size is 0 (Figure 5-14). The Java wart involving generics and arrays comes up again on line 12. We can't allocate new E[1], so we have to allocate new Object[1] and cast it to E[]. This causes a warning, but there's no way around it.

Figure 5-14. The generic ArrayStack class is similar to Deck.

The isEmpty() method (Figure 5-15) is identical to the one from Deck.

Figure 5-15. It's easy to determine if an ArrayStack is empty.

The pop() method (Figure 5-16) is similar to deal(), although we throw an exception if the Stack is empty.

Figure 5-16. The pop() method can throw an EmptyStructureException.

Figure 5-17. The peek() method returns the top element on the Stack.

All that remains is push(). If we try to push something onto a full Stack, the array is stretched, as described in Section 5.1. The code is given in Figure 5-18.

Figure 5-18. The push() method and associated protected methods. The reason for doubling the length of data, rather than merely increasing it by 1, is explained in Chapter 7.

Figure 5-19 shows the effects of push() and pop() operations on an ArrayStack.

Figure 5-19. Instance diagram showing operations on an ArrayStack. These are the same operations shown in Figure 4-1. The shaded portions of data are not in use.

The ArrayQueue class, which implements the Queue interface, makes further use of the idea of using only part of an array. There are, of course, complications.

We choose to make higher array indices correspond to elements closer to the back of the Queue. Thus, adding something to an ArrayQueue is exactly like pushing it onto an ArrayStack (Figure 5-20).

Figure 5-20. Adding something into an ArrayQueue is exactly like pushing it onto an ArrayStack. For brevity, we leave out the ArrayStack object and show only the array.

(This item is displayed on page 130 in the print version)

Figure 5-21. Removing an element causes the front of the queue to move along the array.

(This item is displayed on page 130 in the print version)

We solve this problem with another field, an int front, which specifies where the queue starts. Whenever we remove, front is incremented, so we know where to find the first element the next time we remove. The next available position for adding is front + size.

There is one more issue. After a series of insertions and deletions, the "in use" portion of the array runs up against the right end of the array. Once this happens, we can't add anything else to the queue, even though there are unused positions.

The solution is for the queue to wrap around, so that the next element added goes at position 0. This is illustrated in Figure 5-22.

Figure 5-22. After hitting the right end of the array, the queue wraps around to the beginning.

When we add an element, it should normally be placed at position

but it should instead be placed at position

if the first expression would produce an index beyond the end of the array. We could compute the position with an if statement:

The code for the ArrayQueue class is given in Figure 5-23.

The operation of an ArrayQueue is illustrated in Figure 5-24.

Figure 5-24. Operations on an ArrayQueue. These are the same operations shown in Figure 4-29. 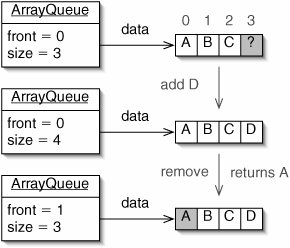