The size of an array is determined when it is allocated. We can overwrite individual elements, but we can't make the array longer or shorter. In this section, we will see some ways around this problem. As a running example, we will write the Deck class, which we mentioned in Chapter 4. A Deck holds a varying number of Cardsoriginally 52, fewer as Cards are dealt from the Deck. These two classes are illustrated in Figure 5-1.

Figure 5-1. UML class diagram of the Deck and Card classes. 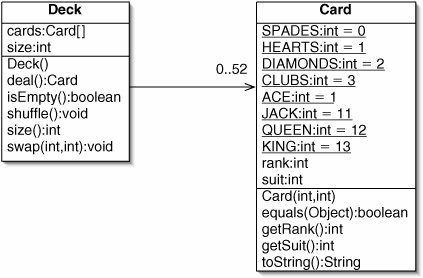 Before writing Deck, let's take a moment to write Card. A Card has two fields, rank and suit. Since, once a Card is created, these things never change, we don't provide mutators for them, only accessors (Figure 5-2).

Figure 5-2. Fields, constructor, and accessors for the Card class.

Figure 5-3. Constants from the Card class.

All that remain are the standard methods equals() and toString() (Figure 5-4). Note that suit is ignored in equals(). The charAt() method from the String class is used to good effect in the toString() method.

Figure 5-4. Remaining methods from the Card class. An extra character is included at the beginning of the String of rank names because 'A' corresponds to 1, not 0.

It is clear that the Deck class will need an array of Cards. Specifically, since a Deck can never hold more than 52 cards, this array should have a length of 52 (Figure 5-5).

Figure 5-5. A first draft of the Deck class. The constructor does not yet create the Cards as the comment promises.

When we create an instance of this class, we have room for 52 cards (Figure 5-6). The problem, of course, is that we don't always need this much room. How can we change the size of the array?

Figure 5-6. A Deck contains an array of Cards. The array has length 52.

Figure 5-7. The field size indicates that only the first three positions in the array cards are considered "in use." This figure shows two instance diagrams of the same structure. The version above makes it explicit that each of the first three elements of cards is a reference to a Card instance. The version below simply shows each Card's rank and suit in the corresponding array position. 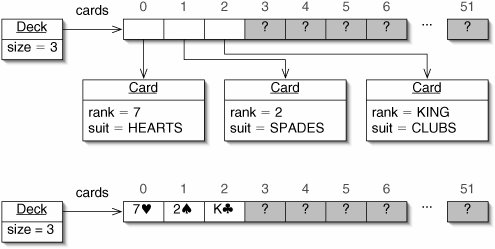 It is important to distinguish between the size of the Deck (how many Cards it currently contains) and the capacity of the Deck (the maximum number of Cards it can contain52).

With this idea in mind, we can rewrite the Deck class so that the constructor fills the Deck with 52 Cards (Figure 5-8). This version of the constructor also creates all of the Cards by looping through the suits and the ranks.

Figure 5-8. By the end of the constructor for the revised Deck class, size is 52.

Figure 5-9. Methods indicating the fullness of a Deck are trivial.

The only method (besides the constructor) that modifies size is deal(), which removes and returns the top card on the Deck (Figure 5-10).

Although deal() is a very short method, its behavior is interesting. It begins by reducing the size of the Deck on line 3. The Card we want to return is now at index size. This is in the "not in use" part of the Deck, but the Card is still there, so we can return it in line 4. This is illustrated in Figure 5-11.

Figure 5-11. Dealing from a Deck. The Deck before dealing, with the king of clubs on top, is shown above. When size is reduced (below), element 2 ceases to be part of the Deck, but the value at that position does not change, so we can still return it.

All that remains to complete the Deck class is the shuffle() method. This could get quite complicated if we attempted to model the "riffle shuffle" that most Americans use when shuffling physical cards. Fortunately, there is a simpler algorithm. We must separate the problem specification (rearrange the Cards in a random order) from the algorithm we happen to know.

Rearranging the Cards in a random order means that any Card is equally likely to end up in position 51, any of the remaining Cards is equally likely to end up in position 50, and so on down. A simple algorithm falls out of this definition. We pick one index at random and swap the Card at that position with the one at position 51. There is a small probability (1 in 52) that we will pick index 51, but this is not a problem: we just swap the Card at position 51 with itself, which has no effect. There is a 1 in 52 chance that the Card that was on top of the Deck will remain there, which is exactly what we want.

We then pick one of the 51 remaining indices (0 through 50) and swap the Card there with the one at position 50. This continues down through position 1. We don't have to choose a random Card to swap into position 0, because there's only one Card left to choose from at that point.

The shuffle() method is shown in Figure 5-12. The swapping of Cards is handled by the method swap(). Since we don't want users of the Deck class to be swapping Cards at arbitrary indices (especially indices which are greater than or equal to size), we declare swap() protected.

The field size allows us to change the size of a Deck at will, as long as size never exceeds the actual length of the array. What if a structure needs to grow beyond its original capacity? While this isn't necessary in a Deck, it is certainly an issue for stacks and queues, which can become arbitrarily large.

The solution to this problem is somewhat shocking: we copy the entire contents of the array into a new, larger array (Figure 5-13). This operation can be time consuming, although we will see in Chapter 7 that it is not quite as bad as it appears.

Figure 5-13. Stretching an array. The array data is full (top), so we can't add more elements. Instead, we copy the elements into a new, larger array (middle). Finally, data becomes a reference to the new array (bottom). 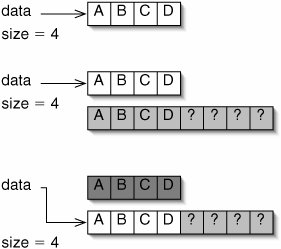