Understanding graphs allows us to create much more elaborate games than we could before. Almost any game board can be treated as a graph. For a concrete example, we present the game of Galaxy (Figure 15-2).

A partial transcript using our implementation is given in Figure 15-3.

Figure 15-3. Sample move in a game of Galaxy. Player 2 scores 2 points occupying star 4, which is adjacent to two stars occupied by player 1: star 5 and star 8.

This user interface clearly leaves something to be desired; improving it is left as Problem 15.28.

Before writing the code for Galaxy, we introduce some graph terminology.

Figure 15-4. Directed (left) and undirected (right) graphs. Vertex G in the directed graph has a self-loop.

(This item is displayed on page 411 in the print version)

A path from one vertex to another is a sequence of vertices, each a neighbor of the previous one. In Figure 15-4, the sequence I

images/U2192.jpg border=0>A is a path from I to A. The distance between two vertices is the length of the shortest path between them.

images/U2192.jpg border=0>F is a cycle. In an undirected graph, a cycle may not follow the same edge more than once. Thus, J

A graph with no cycles is called acyclic. A directed acyclic graph is sometimes called a dag (Figure 15-5).

A graph in which every pair of vertices is connected by a path (not necessarily an edge) is said to be connected (Figure 15-6). Not all graphs are connected.

Data are usually associated only with the vertices of a graph. Occasionally, there are also data (usually numbers) associated with the edges (Figure 15-7). Such a number might represent the length of a road between two cities or the price of a cable between two computers. Such graphs are called weighted graphs.

Figure 15-7. In a weighted graph, there are data associated with the edges. 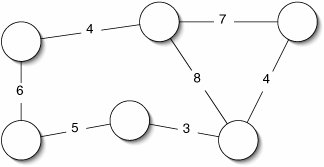 When analyzing graph algorithms, we often give results in terms of v (the number of vertices) and e (the number of edges). In a directed graph, each of the v vertices might have an edge leading to itself and every other vertex, so e

In either case e

O(dense. A graph with far fewer edges is called sparse.