We now present a class LinkedList which implements the List interface from Chapter 5. A LinkedList has one field front, which is a ListNode. As in a LinkedStack, this node may in turn contain other ListNodes. The fields and trivial methods are shown in Figure 6-18.

Figure 6-18. A LinkedList contains a single chain of ListNodes.

Many of the LinkedList methods involve walking down the chain of references. The general form of this code is:

The variable node refers to the node currently being processed. To advance to the next node, we set node to node.getNext().

Figure 6-19. Many LinkedList methods walk down the list using for loops.

Notice that these loops do not use an int to keep track of the current position in the list. We know when we've reached the end of the loop when node is null. In contrast, the get() and set() methods (Figure 6-20) do use an int, since they want to advance only a specific number of nodes.

Figure 6-20. The get() and set() methods advance index nodes down the list.

It appears that the add() method can be written in a similar way. We advance down the List until we get to the last node, at which point we tack on a new one (Figure 6-21).

Unfortunately, there is a catch. What if the List is empty? The method will throw a NullPointer-Exception when we try to invoke last.getNext() on line 4.

One solution is to add code to deal with this special case (Figure 6-22). There is, however, a more elegant way to handle the problem.

Figure 6-22. Special code is needed to handle the case where the LinkedList is empty.

Lines 3 and 9 of Figure 6-22 do almost exactly the same thing: create a new ListNode and set some reference to point to it. In line 3, this reference is the front field of a LinkedList. In line 9, it is the next field of a ListNode.

We can use polymorphism to write a single line of code which does whichever of these things is appropriate. If we have a variable which can refer to either a LinkedList or a ListNode, we can invoke a method on it which says, "Here is a new node. Make it the next one after you."

The Predecessor interface is given in Figure 6-23. It also describes a method getNext(), which returns the next node after the Predecessor.

In order to use this interface, both ListNode and LinkedList will have to implement it. ListNode already provides these methods, so we just have to change the first noncomment line to:

In the LinkedList class, we have to provide both of these methods and change the first noncomment line (Figure 6-24).

Figure 6-24. The LinkedList class must be modified to implement Predecessor.

The LinkedList class now implements two different interfaces. This is illustrated in Figure 6-25.

Now we can write a more elegant version of the add() method for LinkedList (Figure 6-26).

Figure 6-26. The Predecessor interface allows us to write a shorter version of add() than the one in Figure 6-22.

We now consider the two remove() methods. One of these methods removes the element at a particular position; the other removes a particular Object. Both make use of the technique of splicing out a node. They also use the Predecessor interface to avoid special code for the case where the node being removed is the first one.

In each method, we walk down the list looking for either the ith node or the node containing target. Once we find the offending node, we have a problem: we've forgotten the previous node!

Our solution is to keep track of two nodes: the previous one and the current one (Figure 6-27). Since such an algorithm points at two consecutive nodes on each pass through its loop, it is known as a two-finger algorithm.

Figure 6-27. In a two-finger algorithm, two variables (prev and next) refer to two consecutive ListNodes. Labels on the references between objects are omitted for brevity. 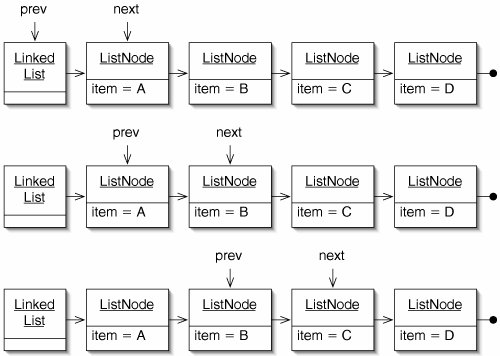 The code for the remove() methods is given in Figure 6-28.

Figure 6-28. Both of the remove() methods are two-finger algorithms.

All that remains is the iterator() method. As in ArrayList, it simply creates and returns an Iterator (Figure 6-29).

Figure 6-29. The iterator() method returns an instance of ListIterator.

Specifically, it returns an instance of the ListIterator class (Figure 6-30). A ListIterator keeps track of both the node containing the Object most recently returned by next() and the predecessor of that node.

The remove() method of ListIterator leaves both prev and node referring to the same Predecessor. This is not a problem, because hasNext() does not look at prev, and next() begins by setting prev = node anyway.