A computer's memory is divided into two sections: the call stack and the heap. The call stack, discussed in Section 4.2, is where variables (and arguments) are stored. The rest of memory is the heap. (This has nothing to do with the use of the word "heap" in Section 14.1.)

For each variable, a certain number of bytes are allocated in the call frame where the variable lives. If the variable is of a primitive type, the required number of bytes is known in advance, so the variable's value can be stored directly in the call frame. For reference types, which are often polymorphic, it is not clear how many bytes must be allocated. For example, a variable of type Object might hold a simple object like a Die or or something much more elaborate like a Hash-Table. Such objects live in the heap, which is effectively a gigantic array. Within the call frame, a reference to the heap object is stored. A reference is actually a number, called the address of the object, indicating where in the heap the object lives.

An object may take up several positions, or cells, in the heap. For example, an instance of class Card has two fields, so it takes up two cells in the heap. (This is an oversimplification, but it will do for our purposes.) When we initialize a variable

we get the situation shown in Figure 16-1.

Figure 16-1. The variable card, on the call stack, is a reference to an object in the heap. The address of this object is 4. The arrow is redundant; the actual pointer is the number 4 on the call stack. Shaded cells are not in use.

An object can, of course, have fields of reference types. In other words, the heap can contain pointers. A linked list might be represented as in Figure 16-2. Notice that the list can be scattered around memory. Indeed, as we shall see in Section 16.2, the Java system might even move things around in memory without our knowledge! As long as following the pointers gets us to the correct objects, this is not a problem.

(This item is displayed on page 445 in the print version) 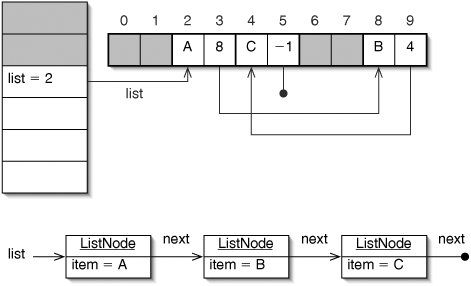 A null pointer is represented by a pointer to some invalid address. In Figure 16-2, this is the number 1. This is why we use ==, rather than equals(), to check if an object is null. The == operator directly compares the contents of two locations in memory. In contrast, equals() follows the pointers in those two locations and compares the objects to which they refer.

In languages with explicit memory management, like C and C++, it is possible to determine the address of an object. In Java, we can't see the addresses. This is what people mean when they say that "Java doesn't have pointers." We do have references in Java, so we can build linked structures, but we don't have direct access to the addresses themselves.

Aficionados of various languages will argue at great length about whether or not addresses should be visible. We won't attempt to settle this argument here, but we will illustrate some of the consequences of each approach.

We can't access real addresses in Java, but we can build a simulated memory in which the addresses are visible (Figure 16-3).

Figure 16-4 shows Java statements and the corresponding statements for the simulated memory.

The reader with an eye for detail will wonder why the address 4 was chosen. This choice is arbitrary, but it raises a very serious concern: how do we make sure we don't choose a section of the heap that overlaps with one being used for some other object? Memory management is the job of keeping track of which addresses are in use.

Let us assume, for simplicity, that each object takes up exactly two cells in the heap. We can string all of the unused cell pairs together in a sort of linked list (Figure 16-5). This list of available memory is called the free list.

Figure 16-5. The free list contains the objects beginning at addresses 2, 6, 0, and 8. As shown here, the free list does not necessarily start at address 0.

When we first create our memory, we have to string all of the cell pairs together to create the free list (Figure 16-6).

Figure 16-6. When the memory is first created, all memory must be put on the free list.

When we need a new object, we just take the first one off the front of the free list (Figure 16-7).

Figure 16-7. The allocate() method returns the address of an available object.

This allocation is similar to what happens in Java when we use new. A more significant difference comes when we're done with an object. In Java, if there are no references to an object, it is automatically returned to the free list. In a language with explicit memory management, we have to tell the system that we're no longer using the memory allocated for that object. In our simulated memory, this is accomplished with the method free() (Figure 16-8).

Figure 16-8. In explicit memory management, when we're done with an object, we have to manually put it back on the free list, using this method.

If we are done with a linked structure (Figure 16-9), we must be sure to free each of the objects in that structure.

Figure 16-9. Freeing linked structures requires some care. Objects can be linked in lists (left), trees (middle), and directed graphs (right). Each square here represents an object, which may occupy many cells in the heap and therefore contain several pointers.

Freeing a list is fairly easy, but we must take care to store the address of the next object before we free the current one (Figure 16-10). Once we free some memory, any other part of our program (or even another program) may claim it and change its contents.

Freeing a tree is more difficult. We have to have some way of distinguishing cells that contain pointers from those that don't. In practice, the compiler builds this information into the instruction part of the program. In our simulated memory, we assume that any value less than NULL is not a pointer.

To free a tree, we just traverse it, freeing objects as we go (Figure 16-11). Once we free the memory for an object, we can no longer look inside it to find its descendants. It therefore is important to do this traversal postorder.

Figure 16-11. A tree can be freed with a postorder traversal.

Notice that freeTree() would also work to free a linked list. If we know that we have a linked list, though, freeList() is more efficient, because it does not involve recursive method invocations.

We will not give a method for freeing a graph just yet, but note that such a method would also work for a tree or a linked list. Again, there would be a price in efficiency for handling a more general case. The automatic memory management techniques described in Section 16.2 address this most general case, so the programmer needn't think about the details of freeing linked structures.

Advocates of explicit memory management emphasize the efficiency cost of always using general-purpose techniques when sometimes a simpler method like freeList() would do. Advocates of automatic memory management point out that insidious bugs that can arise from failure to properly free memory when we're done with it.

Suppose a method allocates memory for a temporary object, but fails to return it to the free list afterward. Every time the method is run, a little bit less memory is available. This kind of bug is called a memory leak. A memory leak is difficult to find, because it does not cause a problem immediately. The program runs perfectly for a while, until the computer runs out of memory and the program crashes.

A complementary bug is freeing some memory that we're not really done using. A pointer into memory that we don't really control is called a dangling pointer. A dangling pointer can be caused either by freeing memory and then trying to access it, or by failing to initialize a pointer in the first place. Debugging a program with a dangling pointer is particularly nasty, because the program may behave differently on each run. When we free memory, its contents will probably stay the same for a while, but once someone else grabs that memory, its contents will change in unpredictable ways. Even more bizarre behavior can result from writing to the memory on the other end of a dangling pointer, which could alter the dataor even the instructionsof another program.

Barring bugs in the Java compiler, both memory leaks and dangling pointers are impossible in Java. Memory is returned to the free list exactly when we're done with it. We can't even get a dangling pointer by failing to initialize a field of a reference type, because Java automatically initializes such fields to null. If we try to follow such a reference, we get a NullPointerException.

Returning to the other side of the debate, advocates of explicit memory management point out that certain things can be done only with direct access to addresses. For example, consider the method swap() (Figure 16-12).

Figure 16-12. This method works in the simulated memory, in which we have access to addresses, but can't be written for normal Java variables.

We can do this in the simulated memory, but in plain Java, there is no way to write a method swap() so that after

We can gain some of the efficiency of explicit memory management without switching to another language such as C or C++. In a program which spends a lot of time allocating and freeing memory, we can allocate a bunch of objectssay, list nodesin advance. These objects comprise a node pool. We manage the node pool much like the free list described above (Figure 16-13).

Figure 16-13. A node pool. All of the nodes are created in the constructor.

The node pool improves the efficiency of our program for two reasons. First, we don't have to use Java's general-purpose automatic memory manager to keep track of our nodes. Second, since all of the nodes are allocated at the same time, they probably live near each other in the heap, which improves cache performance.

How much speed do we gain from using a node pool? The answer can vary considerably, depending on the particular Java system being used. We can perform an empirical test by doing some memory-intensive operations both with and without the node pool. The methods in Figure 16-14 grow and shrink a linked stack of 1,000 nodes, repeating the experiment 10,000 times.

Results will vary from one machine to another. On the author's system, a typical run produces this result:

The use of the node pool appears to speed up this program by a factor of between 4 and 5. This result should be taken with a grain of salt, because this particular program does almost nothing but allocate and free memory.

Like any other optimization, a node pool should be used sparingly. A program should first be made to run correctly. Once this is done, if there is reason to suspect that a lot of time is being spent on memory management, a node pool can offer considerable speedup.

Database Modeling with MicrosoftВ® Visio for Enterprise Architects (The Morgan Kaufmann Series in Data Management Systems)
WebLogic: The Definitive Guide
Making Sense of Change Management: A Complete Guide to the Models, Tools and Techniques of Organizational Change
Practical Intrusion Analysis: Prevention and Detection for the Twenty-First Century: Prevention and Detection for the Twenty-First Century
Sap Bw: a Step By Step Guide for Bw 2.0
.NET-A Complete Development Cycle
The Oracle Hackers Handbook: Hacking and Defending Oracle
Flylib.com © 2008-2020.
If you may any questions please contact us: flylib@qtcs.net
Privacy policy
This website uses cookies. Click here to find out more.
Accept cookies