The structures in this chapter are composed of list nodes. A list node contains only one element, but it also contains (a reference to) another list node. A list node is represented by an instance of a class called, not surprisingly, ListNode (Figure 6-1).

Figure 6-1. A ListNode contains another ListNode unless next is null. 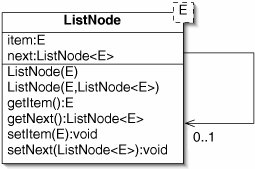 This arrangement allows us to make a chain of ListNodes, each containing a reference to the next one (Figure 6-2). The next field of the last node is null.

Figure 6-2. A chain of three ListNodes.

An alternate approach, taking advantage of the overloaded constructor, is to create the entire chain with one expression:

As we'll see later in this chapter, these chains of nodes are usually constructed gradually, with nodes being added or removed as elements are pushed onto a Stack, removed from a Queue, and so on.

We can splice a node out of a chain if we can find the node's predecessor. For example, if the nodes in Figure 6-2 are named node1, node2, and node3, then the method invocation

results in the situation shown in Figure 6-3.

The code for the ListNode class is simple (Figure 6-4).

It is sometimes useful to have a doubly linked node, which knows about both the previous and the next node (Figure 6-5).

Figure 6-5. A DoublyLinkedNode knows about both its predecessor and its successor.

A chain of DoublyLinkedNodes is somewhat hairy looking, because there is one sequence of references leading forward and another leading backward (Figure 6-6).

Figure 6-6. A chain of DoublyLinkedNodes. For clarity, type parameters have been omitted.

A chain of DoublyLinkedNodes is more difficult to maintain than a chain of singly linked nodes, but it has its uses. We can traverse the chain in either direction. Also, if we have a particular node, we can splice it out of the list without advance knowledge of its predecessor. This allows us to write a method remove() in the DoublyLinkedNode class (Figure 6-7).

Figure 6-7. The remove() method from the DoublyLinkedList class.

The rest of the code for the DoublyLinkedNode class is straightforward. It is left as Problem 6.25.