The search algorithms in the previous two sections require that the array to be searched is already in sorted order. There are many algorithms for getting an array into this sorted state. This section discusses one of the simplest sorting algorithms, insertion sort.

Insertion sort is the algorithm many people use when sorting a hand of cards. Begin with all of the cards on the table. Pick up one card and place it in the left hand. Pick up a second card and add it to the left hand, either to the left or right of the first card depending on whether it is smaller or larger. Insert a third card into its proper place in this sequence, and so on, until all of the cards have been inserted.

Figure 8-6. A first version of insertion sort uses two arrays: one to hold the data still to be inserted (left) and another to hold the result (right). When a number is inserted in the output, any larger numbers have to be shifted over one position. 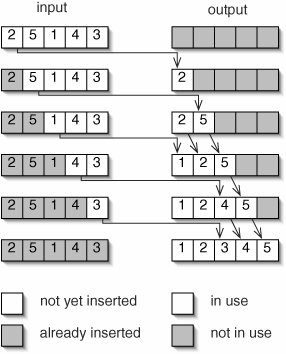 Given this improvement, the first number we actually have to insert is element 1. Element 0 would always be inserted at position 0, and it's already there. It will be moved if any smaller numbers are later inserted. This improved version is illustrated in Figure 8-7.

Figure 8-7. An improved version of insertion sort uses the input array to hold both the sorted portion (unshaded) and the numbers still to be inserted (shaded). In each step, the next available unsorted number is inserted into the sorted region of the array.

The code for insertionSort() is given in Figure 8-8. The main loop inserts each element in turn (except element 0). The loop on lines 68 works through the sorted region from right to left, moving each element one position to the right as it goes. This both finds the correct place for target and makes sure there is room to put it there when it arrives.

In the worst case, data was in reverse order, so each number must be moved all the way to the beginning of the array as it is inserted. The total time required for this is:

In the average case, we can assume that when we insert element i it is equally likely to end up in any of the positions 0 through i. (This is effectively the same assumption we made in analyzing the average-case performance of linear search.) Each insertion is into a sequence of i 1 already sorted numbers, so it takes at least (i 1)/2 comparisons on average. The total average case running time for insertion sort is therefore at least: 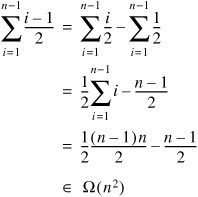 We will see some more efficient sorting algorithms in Chapters 9, 12, and 14, but we now have a benchmark. Any sorting algorithm that takes time in an order higher than Q(n2) is less efficient than insertion sort and not worth considering.

Remember that asymptotic notation roughly indicates the rate at which a function grows, but obscures constant factors. For example, a method that takes 10n2 milliseconds to run is in a higher order than one that takes 200n milliseconds, but is actually faster for very small values of n. Because it is so simple, insertion sort has a low constant factor within its order. It is therefore a good algorithm to use when the number of elements being sorted is very small.