This section illustrates the software development cycle and introduces some concepts from object-oriented programming. As an extended example, we develop a program to play the game of Beetle (Figure 1-4).

In Appendix A, we use the word "class" as a rough synonym for "program." While each program needs to have a main() method in some class, many classes are not programs. In object-oriented programming, a class is predominantly a description of a set of similar objects, such as the class of birds, the class of insurance claims, or the class of dice. A class is an encapsulated component of the program.

We can create multiple instances of a class. Each instance is a different object, but they have things in common with the other members of their class. In the Beetle game, we'll eventually have to create two instances of the class of beetlesone for each player. We will also create one instance of the class of dice.

Breaking our program down into classes is the first step in design. For the Beetle game, we will need three classes: the class of beetles, the class of dice, and the class of Beetle games. (We create one instance of the last class each time we play the game.) This organization is illustrated in Figure 1-5. This type of diagram is called a UML class diagram. The UML (Unified Modeling Language) is a widely used set of notations for diagramming many aspects of software development, from user interactions to relationships between methods. Most of the UML is beyond the scope of this book, but we will use these class diagrams as well as (later in this section) instance diagrams. UML notation is introduced gradually over the course of the book and summarized in Appendix B. 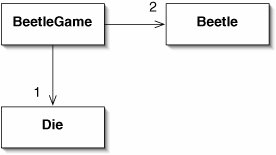 In Java, the name of a class traditionally begins with an upper-case letter. The three classes we need to build are therefore called Die, Beetle, and BeetleGame. Each class is defined in a separate file, which must have the same name as the class and a .java extension. The first drafts of these files are shown in Figures 1-6 through 1-8 .

We now focus on the simplest class of objects, the Die class.

What exactly is an object? An object has two kinds of components:

In order to make our development cycle for the Die class as short as possible, we start by thinking, "It will have to keep track of which face is on top." We'll design other features, such as the method for rolling, later. In a top-down approach to software development, on the other hand, we would specify all of the methods before thinking about implementation details such as fields.

A first shot at implementing the Die class is shown in Figure 1-9.

Figure 1-9. A first shot at implementing the Die class. It compiles, but it doesn't run.

This class compiles, but it doesn't run. The problem is that there is no main() method. Before we fix this, notice a couple of things about the field topFace.

First, the field is not declared static. This means that it can have a different value for each instance of Die. A field like this is called an instance field or instance variable. Since this is the most common kind of field, it is often simply called a field.

Figure 1-10. The class can now be run, although it still doesn't do anything.

Was there any point in doing this? Yes: we now have a program that we can run. After each change we make from now on, we can check if the program still runs. If not, the bug is most likely in the new code. By making such small, incremental changes to the code, we can avoid spending a lot of time hunting for bugs.

We have now completed one iteration of the software development cycledesign, implementation, and testingfor the Die class.

Returning to design, the next thing our class needs is a constructor. A constructor is a method that initializes all of the fields of an object. It always has the same name as the class. We decide that, whenever a new instance of the Die is created, it will have the 1 as the top face.

Our design so far can be summed up in a more detailed UML class diagram (Figure 1-11). Since the Die class is an encapsulated component, we don't include the boxes for the other two classes in the program in the diagram.

Figure 1-11. UML class diagram for the Die class. This diagram says that there is one field, topFace, which is of type int. There are two methods: the constructor Die() and the method main(). The constructor takes no arguments and, like all constructors, has no return type. The main() method takes an array of Strings as an argument and has a return type of void. This method is underlined because it is staticmore on this later.

The implementation of the class, including the constructor, is shown in Figure 1-12. The constructor, on lines 710, is easily recognized because (a) it has the same name as the class and (b) it has no return type. Its job is to initialize the topFace field of every new instance of Die to 1.

Figure 1-12. The constructor initializes the field topFace to 1.

To create a new instance of the Die class, we use the expression:

On line 17, the main() method creates such an instance. This line may seem a bit cryptic, but it is no stranger than a line like:

Line 17 declares and initializes a variable of type Die. New types are defined in Java by creating classes. The name of the variable is d. The initial value of d is the result of the expression new Die().

Once we have an instance, we can access its topFace field. In the main() method, the instance is called d, so the field is accessed as d.topFace. Within a nonstatic method such as our constructor, we can refer to the current object as this.

Information hiding prevents us from referring to d.topFace within the constructor, because d is a variable inside the main() method. The constructor can still do things to the object (such as setting its topFace field), because this and d are references to the same instance.

Figure 1-13. In a UML instance diagram, the (nonstatic) fields of each instance are shown, but the methods are not. In this diagram, this and d are both references to the same instance of Die.

(This item is displayed on page 14 in the print version)

This automatic initialization of fields is an unusual feature of Java. If we rely on it, we should include a comment to this effect, in case someone some day wants to translate our code into another language, such as C, which does not have this feature.

We now compile and run our program. It produces the output:

This is exactly what we expected. On to the next iteration of the development cycle!

Accessors, Mutators, and this

Referring to the topFace field as d.topFace is fine while we're working within the Die class, but eventually other classes (like BeetleGame) will have to know which face is showing on a Die. It would violate encapsulation for a method in another class to directly access this field. In fact, since we declared topFace to be private, Java won't let us do this. This is information hiding enforcing encapsulation.

We add an accessor getTopFace() and a mutator setTopFace() to the design of the Die class in Figure 1-14.

Figure 1-14. Adding an accessor and a mutator to the UML class diagram for the Die class.

The code for these two methods, as well as the revised main() method, is shown in Figure 1-15.

Figure 1-15. Accessor, mutator, and revised main() method for the Die class. Since the rest of the class is unchanged, it is not shown in this Figure.

The main() method of any class must be static. This is because it can be the first method run. It can't be invoked on a particular instance because there might not yet be any instances of the class.

Static methods are invoked on a class (such as the Math class, which we'll use momentarily) rather than on a specific instance. While it is legal to invoke a static method on an instance, doing so can lead to some surprising results, so it is a bad idea.

We will need one more method to roll the Die. The expanded class diagram is shown in Figure 1-16.

Figure 1-16. The roll() method takes no arguments and has a return type of void.

The implementation involves the static random() method from the built-in Math class. This method returns a random double which is at least 0 and less than 1. If we multiply the result by 6, throw away any fractional part by casting it to an int, and add 1, we get a random int between 1 and 6 inclusive.

The roll() method, along with a main() method to test it, is shown in Figure 1-17. We should run this one a few times, because it does not always produce the same output.

We are done with the Die class for now. We can generate automatic documentation with the command:

Notice that in the resulting file Die.html, the private field is not shown. This is encapsulation at work again. If someone comes along later to write another game involving the Die class, she doesn't have to look at our code. The documentation tells her everything she needs to use Die objects.