As we continue to slowly work our way up the OSI model with these best practices, it is now useful to develop some design considerations in the realm of routing. The most important is the security of the routing protocol.

Routing security has received varying levels of attention over the past several years and has recently begun to attract more attention specifically around BGP on the public Internet. Despite this new attention, however, the area most open to attack is often not the Internet's BGP tables but the routing systems within your own enterprise network. Because of some of the sniffing-based attacks discussed in Chapter 3 and earlier in this chapter, an enterprise routing infrastructure can easily be attacked with MITM and other attacks designed to corrupt or change the routing tables with the following results:

There are four primary attack methods for these attacks:

These four attack methods can be mitigated in the following ways:

As you can see, stopping all these attacks is not a matter of flipping on the secure option in your routing protocols. As stated in Chapter 2, you must decide for your own network what threats need to be stopped. In addition to the specific threats mentioned here, it is also very useful to follow the network design best practices of not running routing protocols on interfaces with no reason to route and of using distribution lists to limit the routing prefixes that are sent or received by a specific routing instance. Details on distribution lists can be found in your favorite Internet routing book.

MD5 digest works by creating a 16-byte hash of the routing message combined with a secret key. The 16-byte value is, therefore, message-specific, and modification of the message by an attacker invalidates the 16-byte digest appended to the message. Without the secret key, which is never sent over the wire by the routing protocol, the attacker is unable to reconstruct a valid message. It is worth noting that the MD5 option provides authentication and packet integrity, not confidentiality. Figure 6-16 shows how the hash function operates. 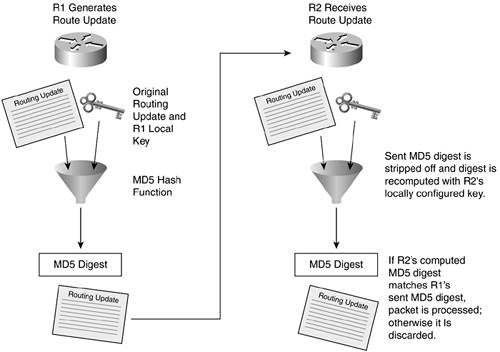 MD5 passwords should have the same properties as other critical passwords in your network. They should follow the password creation guidelines in your security policy. If you choose a weak password, it is possible for an attacker to use brute-force guessing to determine your digest password, thereby allowing the attacker to become a trusted member of the routing domain.

This section details the security options available in the most widely used routing protocols.

Routing Information Protocol (RIP) version 1 (RFC 1058) has no mechanism whatsoever to authenticate routing messages. As such, it should never be used in security-sensitive environments.

RIP v2 (RFC 1723) supports a 16-byte plaintext password that can be attached to routing updates. RFC 2082 specifies a proposed standard for adding MD5 authentication to RIP v2. Whenever possible, use the MD5 digest instead of the basic password.

RIP v2 plaintext messages have the format shown in Figure 6-17. 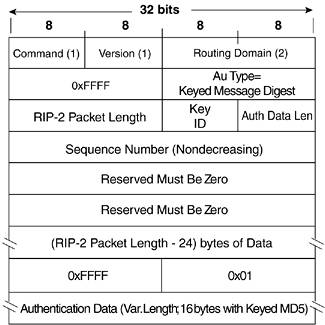 The configuration for RIPv2 authentication is as follows:

Open Shortest Path First (OSPF) (RFC 2328) is one of the most widely used interior gateway protocols today. It supports nearly every bell and whistle you could ask of your routing protocol. On the security side, it offers both plaintext authentication (with basic message checksum) and the much more secure MD5 digest.

OSPF MD5 authenticated messages have the format shown in Figure 6-19. 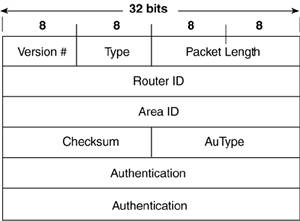 The configuration for OSPF MD5 authentication is as follows:

BGP is most widely used in routing between two different routed domains, such as between you and your ISP or your ISP and the upstream ISP. BGP supports MD5 authentication. Note that because BGP uses TCP as a transport protocol, the MD5 authentication is done as a TCP option. More details on this can be found in RFC 2385. TCP Option 19 is specified for this authentication and takes the format specified in Figure 6-20.

The configuration for BGP MD5 authentication is as follows:

As of this writing, BGP security is receiving a fair amount of attention in the industry. Several extensions are being proposed to allow the BGP messages to be authenticated, as well as to check that an advertiser of a particular prefix is authorized to do so. Most of these mechanisms make at least partial use of a Public Key Infrastructure (PKI). These options will take some time to be agreed upon; in the meantime, best practices are the best line of defense.

Because BGP is unicast as opposed to broadcast or multicast, IPsec can be used with it to provide even greater security. As of this writing, some networks were in the testing phase of their deployments. I would recommend waiting until IPsec in combination with BGP receives more testing before deploying on your own network. Even then, the complexity of the configuration and troubleshooting difficulty might prevent this from being a viable option.

Interior Gateway Routing Protocol (IGRP) is a proprietary Cisco routing protocol meant to address some of the limitations of RIP. The initial version did not address any of its security limitations, however, because IGRP supports no form of authentication. Like RIP, IGRP should be avoided in security-sensitive environments.

The configuration for EIGRP authentication is as follows: 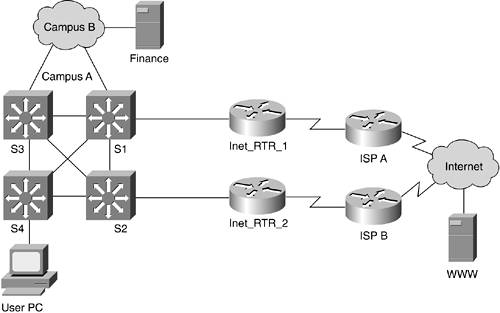 So far, this is network design 101. Most network designers don't have any problem with asymmetric traffic because IP networks are asymmetric by nature. At each point in the transmission, an IP router makes a forwarding decision based on its view of the network.

This becomes problematic when security devices are introduced that rely on state information to make forwarding decisions. Consider the revised diagram in Figure 6-22, where two stateful firewalls are introduced between campus A and the two Internet connections. 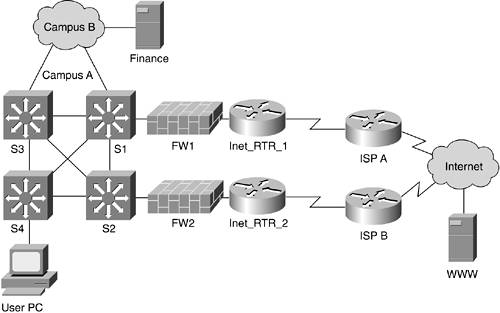 Now asymmetric flows really start to cause problems! Again, consider the PC communicating with server WWW. A perfectly reasonable packet flow might have the outgoing connection flow through S4, S1, FW1, Inet_RTR_1, ISP A, and then to server WWW. Along the way, FW1 learns that the PC is trying to communicate with server WWW, and so it adds an entry in its state table to enable the return traffic to flow when it comes back from server WWW. Unfortunately, the return path for the packet from server WWW to the user PC happens to be ISP B, Inet_RTR_2, FW2, S2, S4, user PC. The packet never reaches the PC, though, because FW2 doesn't have any state information for the communication. As far as it is concerned, server WWW is initiating new communications to the user PC that are blocked based on the configured security policy.

This problem can be further complicated by intrusion detection systems (IDS) deployed within the campus or near the firewalls. If traffic flows by an IDS in an asymmetric manner, it won't see all of the data. Consequently, it might alarm on traffic that is benign (false positive), or it might miss an attack altogether (false negative).

I wish there were an easy answer to this problem, but unfortunately there isn't. This section is included as much to bring the problem to your attention as it is to offer possible solutions. You do have some options, however:

This might seem easy, but in real network designs it can be a significant challenge. Even still, you would be surprised to see how many large networks use symmetric routing at certain parts of their network to enable state-aware security devices to function or to solve other networking issues. This is particularly common at Internet edges, where it is not unheard of to see an entire connection to an ISP lying dormant while the primary connection handles all of the load.

Load Balance Per Flow Rather Than Per Packet

Most L3 devices can be configured to do one of two things when equal-cost paths exist for a given network destination. In the first option, packets are simply balanced in round-robin format, with each successive packet going to the next available upstream router. This option causes the most heartache with internal security systems such as IDS. The second, more preferred, option is to load balance based on a given flow. This means traffic with a particular source and destination IP address and port (often called a four tuple) is always sent by a specific upstream router. This allows IDS systems and other state-aware devices to at least see half of the communication in a consistent manner. Unfortunately, this does nothing to the return traffic, which still might flow over a different link.

As the problem of asymmetric traffic manifests itself more and more in networks, network security vendors are starting to offer options allowing the state information within one security device to be shared with another. In Figure 6-22, FWs 1 and 2 could exchange their state table information to ensure that if the other device sees part of a given flow, it will know to permit the traffic. Often, the amount of information exchanged is significant and requires that dedicated links be configured between the firewalls to exchange the state information.

Consider L2 Redundancy as a Workaround

With the careful introduction of L2 redundancy as opposed to L3, technologies such as Virtual Router Redundancy Protocol (VRRP) or Hot Standby Router Protocol (HSRP) can allow traffic to flow through a single location while still providing redundancy. This option works best on high-speed connections where the use of only one path instead of two or more does not affect network performance.

The result is that normally asymmetric flows can be made symmetric for short distances in the network, such as while traffic passes through a firewall. Again, in Figure 6-22, if FWs 1 and 2 were connected on both sides to the same L2 network, they could use something like VRRP to appear as a single firewall to the upstream and downstream routers. This means that traffic can flow in an asymmetric manner out to the Internet and to the internal network but in a symmetric manner when passing through the firewall. This is generally impossible when the two devices are not in close geographic proximity to one another. For example, if FW 1 is in Brussels, Belgium, and FW 2 is in Hackensack, New Jersey, you are out of luck.

Because this is a book on security, the ins and outs of BGP path preference have no place within the text. It is worth noting, however, that there are a number of things that can be done with routing protocols to affect the paths that packets take. To some degree, you can also influence which path outside networks take when they must communicate with you. Although not very elegant, some other workarounds involve using different NAT pools based on which security device a packet passes through. Return packets can then be forced to a specific security device based on the unique NAT pool they allocate from.

Even though firewalls have been around for many years, a number of companies still use basic ACLs instead of stateful firewalls for, among other things, this asymmetric issue. Some security functionality is clearly lost. Basic ACLs don't track state information, but if your traffic flows are fairly easy to categorize, you can still achieve some security without needing symmetric traffic flows. Remember that if you have properly implemented a true security system as defined in Chapter 1, the access control function of a firewall is only one part of the overall security story.

With IDS, the signatures that work improperly in asymmetric environments can be turned off to prevent false positives. Again, this will reduce the security such systems provide but will still allow a number of signatures to fire properly.