Any network attack can be categorized into an informal process that sets the foundation for the organization of the rest of this chapter. Each element of the process is highlighted at varying levels of detail in the next several sections. The focus, as mentioned earlier, is on the attacks.

Dr. John Howard wrote a doctoral dissertation titled "An Analysis of Security Incidents on the Internet, 19891995," which is available at http://www.cert.org/research/JHThesis/Start.html. In this paper, Howard employs a very formal method of describing the attacker process and a network attack taxonomy. Although far too abstract to be of use in this book, Dr. Howard's work, in part, is the basis of the process presented in this chapter.

Figure 3-1 shows this process at a high level.

The process starts with an attacker. The fact that any attack is launched against a particular target is assumed and not represented in the diagram. The attack is launched by using a specific vulnerability to bring about a specific attack result. This attack result helps the attacker achieve the final objective, whether it be political, financial, or personal. Other potential final objectives of an attacker are not elaborated on in this chapter. Figure 3-2 shows a potential traversal of this process by a script kiddie seeking notoriety. The specific components of the figure are highlighted in more detail later. 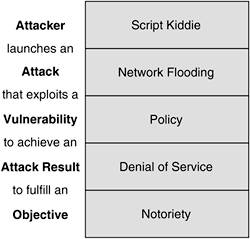