Some hard and soft metrics to measure your system include the following:

As an example, let's look at the traditional design of Internet edges. I've seen many network edges that resemble the network shown in Figure 1-4. 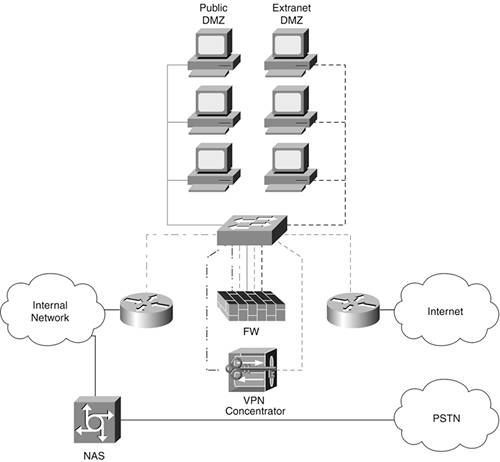 Often the network edge looks this way not because it was the best way to design the network, but because the company's security policy dictated that all traffic flow through a single "choke point." Although the design is topologically simple, it has lots of problems. The one on which I focus in this discussion is the potential for human error, or operational complexity. Human error is one of the biggest root causes of configuration problems, especially at 2 a.m. when security administrators find themselves troubleshooting an issue.

Although the design shown in Figure 1-4 might seem simple, in fact it is needlessly difficult because of its operational complexity. The configuration on the firewall and attached switch in this example are so complex and prone to operator error that the slightest mistake causes the entire security deployment to be compromised.

To remedy this problem, create a network that at first glance introduces much more topological complexity, as shown in Figure 1-5. 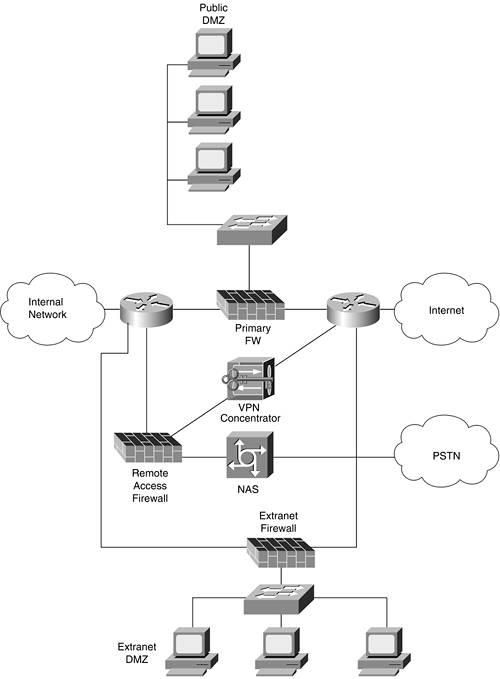 The topology in Figure 1-5 shows an implementation that is easy to understand and much harder to misconfigure. Although it has more devices and doesn't look as "elegant" as the previous example in Figure 1-4, the paths of communication and the insecure and secure parts of the network are much more apparent and securely segmented. In this amended design, outbound Internet access is handled by one firewall, and inbound virtual private network (VPN) access is handled by another firewall with a VPN device. In addition, separate L2 switches are deployed as opposed to relying on a single switch with multiple VLANs. In the heat of the moment, the access rules and potential configuration changes are much simpler.

To ensure operational simplicity, you must constantly evaluate the level of complexity you are comfortable with to ensure that your security is both simple to deploy and straightforward to maintain. Throughout this book, I offer many alternate designs for secure network architectures. Although often some level of topological complexity is introduced to solve a particularly hard problem, all the designs strive toward simplicity of planning, design, implementation, and, most important, operation.