The medium network design can support most organizations with a collapsed backbone design, as discussed in Chapter 12. The design uses both L2 and L3 switching to provide services to users and security to the network as a whole. This design can have hundreds of users and a diverse set of applications in use. There are likely several different trust domains within the design.

The medium network design must provide connectivity for a moderate number of servers and clients and allow them to be separated from one another when necessary. Mitigating the top campus attacks is highly desired because this network might span multiple buildings within a single location. The tight physical controls possible in the small network campus are likely no longer reasonable.

Figure 14-3 shows the basic design for the medium network campus that supports the preceding requirements. 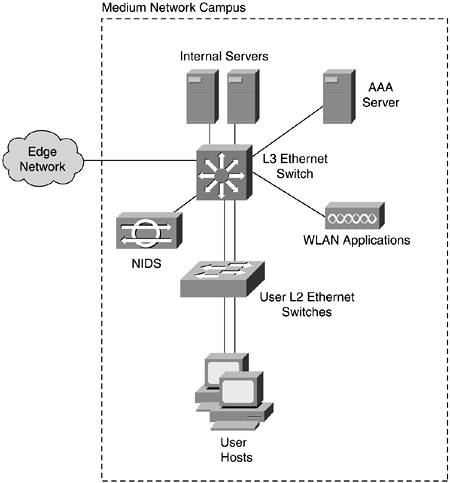 The core of this design is a single L3 Ethernet switch that provides L2 and L3 services to critical devices. It can have as many subnets as necessary to support the traffic separation required. At a minimum: server, client, wireless, and management subnets should be created. Because most campus traffic must flow through this switch, an NIDS can be used to monitor traffic on this switch. Be sure not to oversubscribe the NIDS device or you will likely lose alarm data. See Chapter 7, "Network Security Platform Options and Best Deployment Practices," for more information on NIDS deployment best practices. This switch acts as both core and distribution layer as defined in Chapter 12. The access layer for users is handled by a set of L2 switches. These switches can make use of VLANs to support different domains of trust at the user level. Be sure to implement VLAN hopping best practices on all switches in this design. In addition, the WLAN APs can be connected through these same access switches if your physical cable plant provides no other options. Be sure to use a separate VLAN for the WLAN traffic.

A AAA server is required here to support the identity needs of the edge, campus WLAN identity, and any management access to different devices. If 802.1x is desired (Chapter 9), this server can provide authentication for it as well.

This section outlines the devices present in the medium network campus design and the security roles each device plays, as listed in Table 6-1.

The following capabilities should be enabled on all Ethernet switches in the campus:

The following additional capabilities should be enabled on the core.

Internal servers should be hardened and protected much like any edge server, just with slightly less emphasis and vigilance. You probably have many internal servers, some of which are in your control and others of which are not. It might not be operationally or financially possible to implement all of the following controls, but at a minimum, harden your systems and design a process to test new security fixes and deploy them to your production systems as soon as possible. Again, your own policies easily trump these recommendations. The key security techniques configured on the internal servers are as follows:

Most commonly, if there is an attack on your internal systems, it will be through an attacker somehow gaining access to your user PCs. An e-mail virus/worm or other nefarious application can gain remote control of your user PCs and cause them to attack your own network or other networks. In addition, portable computers spend a good deal of time outside the protective confines of your local campus network. While teleworkers travel or work from home, these systems can be compromised, which can then lead to further attacks when they return to your network. The key security techniques configured on user hosts are as follows:

A signature-based NIDS device is deployed off of the core L3 switch. This allows the NIDS to monitor any interdomain campus traffic deemed necessary (since all choke points are on the switch). As mentioned earlier, beware of oversubscribing the NIDS. (Chapter 7 provides more details on NIDS deployment options.) Because the system is deployed for internal systems only, once properly tuned, it can be used actively to stop some attacks. The key security techniques configured on the NIDS are as follows:

This server can supply your edge and campus with a centralized identity store for systems that can take advantage of it (WLAN, management, VPN, and so on). (AAA deployments are covered in more detail in Chapter 9.) Any AAA deployment should follow the best practices of any other internal server as previously described. The one key additional security technique configured on the AAA server is as follows:

The WLAN APs should be hardened and deployed as described in Chapter 11. Make sure they are deployed on a VLAN separate from the other user traffic as an additional security measure and physically back haul the uplinks directly to the L3 switch if possible, as shown in Figure 14-3. Chapter 11 describes WLAN deployments in more detail, including the IPsec option.

You can now evaluate the success of this design against the campus-focused attack list in Table 14-1. If you recall Chapter 12, this step appears a bit out of order because threat evaluation should also occur during the design of the network, not just after. It is presented in this form to ease understanding of the designs and threats.

Table 14-3 shows the top 10 attacks from Table 14-1 and the security elements used in this design that mitigate these threats as they pertain to campus assets. As in previous chapters, items that can stop an attack often can also detect it and, as such, aren't listed in both columns.

In this table, some of the top mitigation techniques are hardening (all types), rogue device detection, and cryptographic protection for the session or application layer of key applications. All these protections are also in the small network design. What the medium network adds is the various detection capabilities of IDS. In addition, the L3 capabilities of the switch provide more filtering granularity. The extent of defense-in-depth is superior in this design when compared to the small design, though there are still areas where protection is thin (war dialing/driving). To a certain extent, these situations have more to do with the difficulty of the threat than the lack of design options. There aren't a lot of things you can do to stop some attacks if you look back at Table 6-1. The level of security provided in this design is certainly superior to almost every campus network I've evaluated over the years. Even more significant, the security design doesn't impact the core topology in any meaningful way.

There are fewer options to modify the internal design than existed in edge designs discussed in Chapter 13. The core differences come down to doing more or less of the recommended functions outlined in this section.

The most significant addition you can make to this design is to protect certain key server resources with a stateful firewall instead of basic ACLs. This topology, shown in Figure 14-4, allows these key resources to have an added layer of protection. Determining which systems to protect in this manner goes back to the information in Chapter 2. The decision has as much to do with the value of an asset as it does the likelihood that it will be attacked. Examples of systems you can protect with the firewall include insecure proprietary applications, high-value targets (HR, accounting), systems with a high susceptibility to attack, and so on. Your policies and the decisions you make in Chapter 12 should help you make these choices. 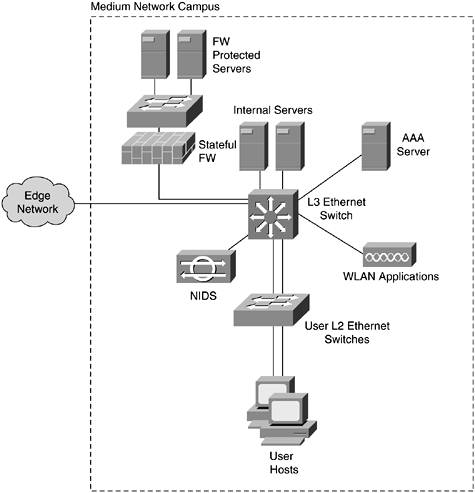 This concept could be further extended by using NIDS on the protected segment. Other ways to increase security include emphasizing host hardening and other host security controls.

Certainly, going to an L2 switch in the core decreases the security level and gives you a design closely mimicking the small network campus design. In addition, having fewer host controls implemented saves costs at the price of reduced security. If you must save money in this design, eliminate the NIDS first and the host add-on security second. Make sure host and application hardening is the last thing you consider eliminating.

Database Modeling with MicrosoftВ® Visio for Enterprise Architects (The Morgan Kaufmann Series in Data Management Systems)
A Practitioners Guide to Software Test Design
Making Sense of Change Management: A Complete Guide to the Models, Tools and Techniques of Organizational Change
PostgreSQL(c) The comprehensive guide to building, programming, and administering PostgreSQL databases
Lotus Notes Developers Toolbox: Tips for Rapid and Successful Deployment
Lean Six Sigma for Service : How to Use Lean Speed and Six Sigma Quality to Improve Services and Transactions
Digital Character Animation 3 (No. 3)
Flylib.com © 2008-2020.
If you may any questions please contact us: flylib@qtcs.net
Privacy policy
This website uses cookies. Click here to find out more.
Accept cookies