The medium network edge is designed to support greater throughput, security, and connectivity options as compared to the small network design.

This design must provide Internet, PSTN, and private WAN connectivity to the outside world. Depending on the network service needed, one or more of these connections can be used. The requirements of the design are as follows:

When compared to the small design, the medium design makes many of the previously optional functions defaults. It is expected that an organization using a network of this size has greater resources to allocate to security. This allows for separating security functions as a deliberate design goal as well. Management requirements for this design are also increased.

This might be the design most similar to many readers' current networks. It applies many of the best practices discussed throughout this book in a way that balances both security and performance. If you aren't sure which of this chapter's three designs to use as a base for your own security design, start here.

The Internet portion of the connectivity looks much like the high-security alternative of the small design. Added to this is PSTN dial-up and private WAN connectivity. See the following alternatives section for options on this. Figure 13-6 shows an overview of this design. 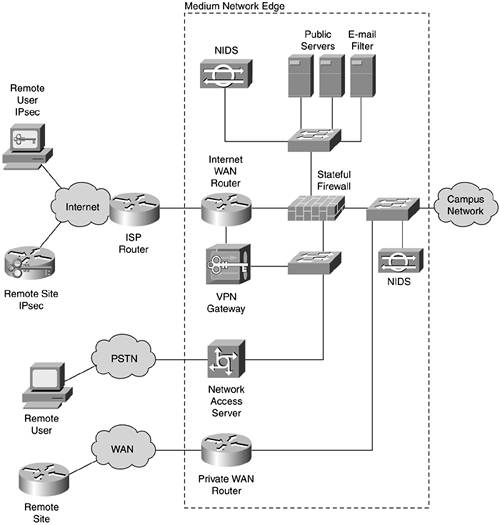 This section outlines specific design considerations and deployment recommendations for each element deployed in the design. Table 6-1 lists all the technologies and best practices from which these design-specific lists were drawn.

In the medium design, a dedicated WAN router is used to handle all routing functions and does some basic security filtering to narrow the field of attack for the firewall.

Some of these security functions are also implemented at the firewall for added protection, but the filtering is expected to be done on the WAN device. This keeps your firewall logs more focused on valid attacks rather than "noise." The key security techniques configured on the Internet WAN router are as follows:

Perimeter security is centered primarily around a stateful firewall that can also have other security functions. This depends on the performance requirements of the device, the capabilities of the firewall you are deploying, and the management infrastructure you set up. This section assumes that only stateful firewall capabilities are available, in keeping with the separation-of-security-function design goal stated earlier in this section. Chapter 7 discusses basic firewall filtering guidelines. The key security techniques configured on the stateful firewall are as follows:

Dedicated signature-based NIDS devices are deployed at two points in the network per the recommendations in Chapter 7. First, one is deployed on the public server segment to protect the hosts there. The second NIDS is deployed behind the main firewall to act as a check of traffic to and from the campus network. The key security techniques configured on the NIDS are as follows:

There are numerous Ethernet switches in this design. Recommendations that are specific to a given switch are called out as such. Although these multiple switches could be combined to a single switch using VLANs, be sure to familiarize yourself with the VLAN issues discussed in Chapter 6. I would not recommend that it be done, although there are reasons beyond just security that can make this a requirement (financial, rack space, and so on). All of these technologies are discussed more fully in Chapter 6. The key security techniques configured on the Ethernet switches are as follows:

In the medium network design, fairly strong host security controls are recommended at the edge. This should be the first requirement in your design. If you don't have control over your hosts, the security benefit that the network can provide is significantly weakened. The key security techniques configured on the public servers are as follows:

The medium network edge topology should not be used for e-commerce, which has unique requirements and is further discussed later in this chapter.

This section highlights the various ways remote users and sites can access the medium network edge to reach services there or inside the campus. As a general rule, access to the organization over private infrastructure is considered trusted and does not receive the same security attention as access to the organization over a public infrastructure.

Both VPN and PSTN dial-up are considered public, which means each has similar security mechanisms applied. If, from a policy standpoint, you trust the VPN and dial-up connections the same as you might trust internal users or a private WAN, feel free to bring these connections straight into your campus network. Make sure this is an informed decision, though, based on the content discussed so far in this book. Most prefer some security for these connections, and the designs presented here reflect that.

Preshared keys are used for all peers (assuming a small VPN). As mentioned in Chapter 10, once you exceed 25 sites, digital certificates should be used. Basic IPsec is probably sufficient, although if you have any of the requirements that point to GRE + IPsec (routing, multicast, and so on), it is appropriate to deploy here.

The private WAN network is very simple in this design, consisting of a single router. This design assumes the private WAN is considered trusted. As such, it is routed behind the firewall. Even still, WAN traffic is subject to the NIDS behind the firewall as a check. If the WAN is not trusted, some combination of firewalls on your WAN routers and IPsec encryption for the links should be considered. The key security techniques configured on the WAN router are as follows:

Although certainly not a requirement, in most networks of this size there is some form of legacy dial-up access to the organization. More and more, networks are outsourcing this function to nationwide ISPs and using VPN from there.

Because most networks still have this function, it is included in the edge design. A dedicated network access server (NAS) is used for dial-up and then is routed through the firewall in the same way as VPN traffic. Extensive filtering on the firewall can occur, or the firewall can act only as an audit check and NIDS enforcement point. The key security techniques configured on the NAS are as follows:

You can now evaluate the success of this design against the edge-focused threat list in Table 13-1. If you recall Chapter 12, this step appears a bit out of order because threat evaluation should also occur during the design of the network, not just after. It is presented in this form to ease understanding of the designs and threats.

Table 13-3 shows the top 10 attacks from Table 13-1 and shows the security elements used in this design that mitigate these threats as they pertain to general Internet connectivity and public server access.

As you can see by reviewing the preceding table, hardening devices is easily the most important thing you can do to improve security. Following that, the various flavors of IDS do a good job detecting many of the top attacks. Perhaps most interestingly, a stateful firewall, typically a mainstay of network security, stops only two out of the top 10 attacks. A number of functions that the firewall provides aren't fully represented in the table, though, and I'm certainly not suggesting that firewalls not be used. By evaluating the types of technologies that detect or stop the different attacks, you can gauge the level of defense-in-depth you have achieved for a given attack.

It is also worth noting that Tables 13-2 and 13-3 are nearly identical to one another. However, for the medium network design, technologies are distributed among more devices, which isn't represented in the table. Since the functions of those devices can be more tuned than in the small design, the level of security you can achieve should be higher. Also remember that by separating the functions you generally achieve faster performance and more scalability.

The threats related to the remote access edge are slightly different than the Internet edge as a whole. Direct access and identity spoofing are the principal threats to VPNs. Both of these threats are stopped by a combination of network crypto and OTP identity mechanisms. For PSTN dial-up access, the threats are the same. Because there is a direct connection from the user to the organization, OTP is generally used without any network crypto. WAN access is generally considered trusted. Even if it were untrusted, most attacks transit the WAN to targets in the campus or Internet perimeter, leaving the WAN unaffected. As discussed in the WAN section, the routers should be hardened, and minimal ACLs can be applied as needed.

Any design has several alternatives. As the design increases in size, so do the options for modifying it. The following section outlines some of the major options for the medium network edge design. Of course, the most important alternative design is your own, developed to meet the needs of your own policy.

One of the more common alternatives in this design is an increased requirement for VPN access. This can be met in two ways. Most easily, remote user and site-to-site VPN can be separated into two or more devices connected in the same manner as the single device. This option is shown in Figure 13-7. 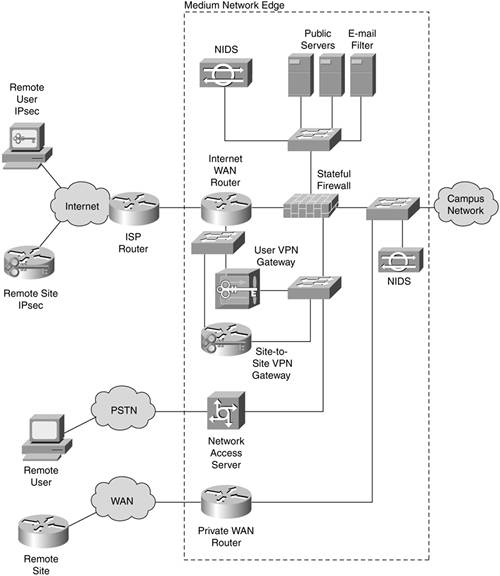 Still another option is to go with a completely separate VPN infrastructure, as outlined in the high-end design covered later in this chapter.

There aren't a lot of obvious ways to increase the security of this design dramatically. The hosts are already well secured and protected (both on the hosts and from the surrounding infrastructure). Web filtering could be deployed on the public server segment or another dedicated firewall interface if your policy dictated its use. Additionally, anomaly NIDS could be deployed on the Internet WAN router by offloading usage data to an anomaly detection tool to watch for abnormal patterns.

Another option is to put a router of some variety as the final device all edge traffic crosses before entering the campus. This allows for routing protocol termination from the campus (if desired) and could act as a final filtering point for all edge traffic.

Although it is tough to make this design more secure, it is easy to make it less secure. If you have to start cutting corners, the following list shows which technologies and devices you can consider eliminating first: 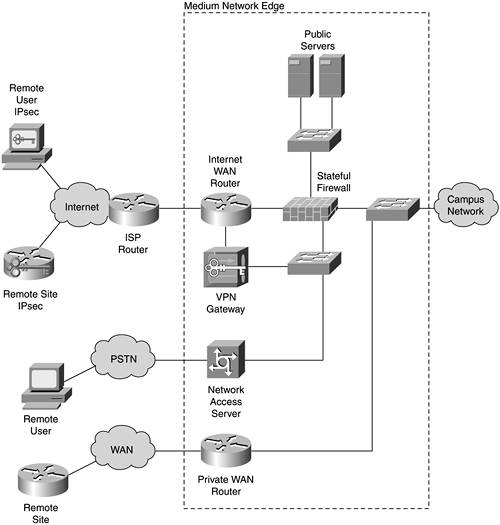