Network attackers have a wide variety of backgrounds, experience levels, and objectives. Any attempt to categorize them can't possibly succeed on all counts. Some categorizations define 26 kinds of attackers, although this does not necessarily help you design your security architecture. To adhere to the persistent theme in this book, the categorization presented here focuses on simplicity and relevance to the network designer. Figure 3-3 shows three types of attackersscript kiddie, cracker, and elitein proportions roughly analogous to their actual numbers. 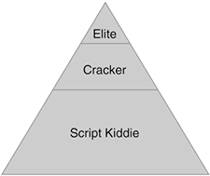 Attackers are a notoriously hard group to track. I don't have any hard data to back up my estimations on attacker group sizes. Figure 3-3 is based purely on my own empirical data.

The next sections describe each type of attacker in more detail.

On the bottom tier of Figure 3-3, you see the ever popular "script kiddie." Script kiddies are so named because stereotypically they are young and often have very little real hacking talent, hence the need to use scripts that do the bulk of the work for them. For as little as they know about attacking networks, script kiddies usually know far more about protecting computers and common vulnerabilities than the average citizen. The motivations of a script kiddie are varied, but generally these attackers do not discriminate in who they attack. Script kiddies prefer to use an attack sequence that they learn and attempt to use it over and over again to seek out resources that are vulnerable to their specific attack.

Although hopefully none of the readers of this book are setting out to be script kiddies, it is useful to understand just how easy it is to become one and cause real damage on the Internet today. Here's a description of how to be a script kiddie in seven easy steps:

The key thing to remember as a network designer is that script kiddies don't necessarily care whether there is anything of value on your machine. Many will be happy to compromise the machine anyway and use it to attack other systems, potentially attracting unwanted attention to your organization.

The middle tier of attackers comprises more experienced and more dangerous opponents. They are distinguished from script kiddies in their ability to think up and launch new attacks against specific targets. Although this group is not easily labeled, "cracker" and "black hat" have both been used in various publications. The one term that should not be used to describe this group is "hacker," which used to be, and for many still is, a badge of honor. The Jargon File (http://www.jargon.org) defines hacker (among other similar definitions) as follows:

A person who enjoys exploring the details of programmable systems and how to stretch their capabilities, as opposed to most users, who prefer to learn only the minimum necessary.

One who breaks security on a system.

The Jargon File goes on to say that the term cracker was coined in 1985 by hackers in an attempt to offer the media an alternative to calling malicious network intruders "hackers." Unfortunately, this fight was lost in the mainstream media. When the media says "hacker," they mean the person doing the illegal stuff.

I personally find the term cracker a bit silly and tough to read in paragraphs where it occurs more than once or twice. Instead, the term attacker is used throughout this book to denote an individual who attempts to gain unauthorized access to information assets.

Finally, the top tier includes the people you rarely read about and certainly don't want attacking your network, the attacker elite. They are the well-paid corporate spies, government-funded information warfare groups, political radicals, and terrorists. Although not always, you can expect this group to be better funded and have very specific targets that they attack relentlessly.

I am always a bit cautious about bringing up this category of top-tier attackers because mentioning them is most often used as a scare tactic when selling security products to big business. "Hey, Mr. Customer, you must buy our new product or your competitor's spies will get you." The fact is, the threat from these sorts of individuals is real but generally for a very specific type of organization under very specific circumstances. If you manage a network that controls a critical infrastructure in your country (electric power, water, emergency services, and so on), you should be concerned about the risk. Likewise, if you work in a competitive market in which your intellectual property is of very high value, it would be naive to assume that all of your competitors are law-abiding citizens.