VPNs, as discussed in this book, come in one of two flavors: site-to-site or remote user. Most organizations deploy a mix of these two VPN types to meet their specific needs.

Site-to-site VPNs are also known as LAN-to-LAN or gateway-to-gateway VPNs. They are built around the idea that the benefits IPsec provides are not needed from host to host, only from one location to another. A common site-to-site VPN is shown in Figure 10-1. 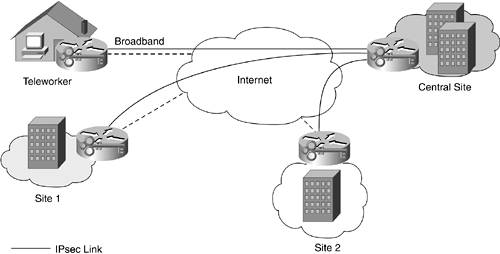 Site-to-site VPNs can be used as private WAN security solutions, private WAN replacements, or private WAN backups. There are three major reasons for deploying a site-to-site VPN. First, in the case of a security solution to an existing private WAN, all communications are encrypted and authenticated before they enter the SP's network. Second, site-to-site VPNs are quick to get started. Business partners looking to communicate with one another can do so easily, provided they both have an Internet connection. The same is true for companies merging with one another. An IPsec link can be built in hours, not weeks, as is generally needed for dedicated circuits. Finally, site-to-site VPNs offer a substantial cost savings over private WAN links in certain situations. The country from which you operate and the distance between sites factors in when considering any savings. Long-haul international connections are ideal candidates for site-to-site VPNs. 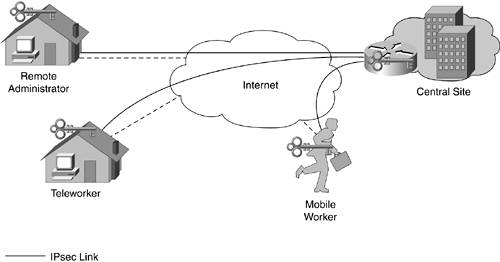 By far, the most common method of deploying remote user VPNs is to use an IPsec software client that resides on the remote host, which then connects to an IPsec gateway. This client connects to an IPsec gateway of some kind, as shown in Figure 10-2. By migrating to a remote user IPsec VPN instead of using traditional dial-up links, you can achieve the "holy grail" of IT: save money and provide a better service to your users. This is because now a remote worker can use an existing home broadband link, or perhaps one provided by your organization, to connect at high speed to your central site. While on the road, the user can take advantage of WLAN links in airports and hotels instead of connecting at slow speeds over PSTN. The cost savings for your organization comes in three forms:

To ensure that your remote users are able to get connectivity when all they have access to is a phone line, many organizations contract with nationwide (or worldwide) Internet service providers (ISPs) to provide local phone numbers for user access.

You might have noticed that teleworkers were in both the site-to-site topology (Figure 10-1) and the remote user topology (Figure 10-2). How teleworkers are classified largely depends on their method of connectivity. When connecting using a software IPsec client running on a host, they are considered remote users. When connecting using a hardware device of some kind, they are more like site-to-site links. In this case, their home LAN becomes almost like a very small satellite office. There are some caveats to these classifications, which are highlighted in Chapter 15, "Teleworker Security Design."