Identity considerations for teleworker systems have to do with two primary elements. The first is establishing the identity of the operator of the teleworker system. The second is establishing the identity of the teleworker system to the organization's main network. The former is a user identity function traditionally comprised of username and password on the local PC. The latter is most often also user based, but as you will see in the designs presented, it is sometimes device based. User-based identity for VPN access should almost always be based on a one-time password (OTP) checked before VPN establishment. In both cases (Figure 15-2), the security of the communications is affected by the surrounding network, but this is particularly true for device-based identity when using a dedicated hardware VPN device (much like a small, site-to-site VPN branch). 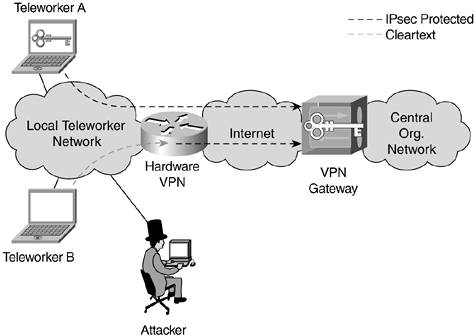 As you can see, an attacker who somehow connects to the teleworker network (public Net, insecure WLAN AP, and so on) is able to read traffic to and from the central site originated by teleworker B but not teleworker A. In addition, the attacker might be able to masquerade as teleworker B, depending on the configuration of the hardware VPN device (more on this later in the chapter).

Digital certificates can be used in the hardware VPN environment, particularly if your network has large quantities of hardware teleworker VPN devices. The same key management and scalability concerns apply to teleworker hardware VPN as they do to dedicated, site-to-site VPN networks discussed in Chapter 10, "IPsec VPN Design Considerations."