Unbelievably, you can have an entire Cisco IP telephony network deployed in a matter of seconds using the Cisco CallManager in its base configuration. However, setting up the voice network correctly can take a considerable amount of planning and configuration. Thankfully, this chapter shows you how to set up the network manually, and then shows you how to pull it off automatically in a matter of seconds.

Chapter 4 discussed the boot process of a Cisco IP Phone. It is critical to understand that process to effectively troubleshoot the IP telephony network. Just to review, the following are three of the critical steps in the process:

Removing DNS reliance is considered a best-practice step in configuring Cisco CallManager. If you prefer, you can keep the Cisco CallManager hostnames in the configuration and still have a functional network.

Renaming the server to the IP address has the following benefits: 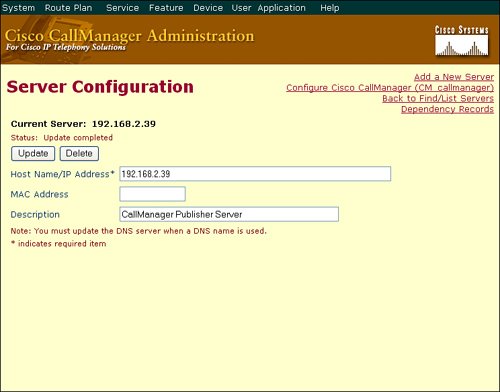 There are other places where server names must be changed to IP addresses to fully remove DNS resolution from the cluster. Most of these can be found in the Service > Enterprise Parameters options.

Device pools provide a convenient way to define a set of common characteristics that can be assigned to devices, such as IP Phones, instead of assigning individual characteristics to individual phones. Device pools enable you to simply assign the phone to the device pool so that the phone automatically inherits the common configuration items. You must configure the device pool for Cisco IP Phones before adding them to the network.

To create a new device pool, you must first create (or use default settings where applicable) the following minimal mandatory components:

The SRST Reference field allows you to specify the IP address of the Cisco SRST router. Cisco SRST enables routers to provide call-handling support for Cisco IP Phones when they lose their connection to remote Cisco CallManager installations or when the WAN connection is down.

These components (except for the SRST reference) are covered later in this chapter. SRST is covered in Chapter 14, "Implementing Multiple-Site Deployments."

The device pool combines all of the individual configurations that you have created into a single entity. You will eventually assign this entity to individual devices, such as IP Phones. This process will configure these devices with most of the configuration elements that they need to operate efficiently in your IP telephony network.

For example, configuring 100 different Cisco IP Phones to use the Arizona time zone, the English language, and the classical-style music on hold (MOH) option is tedious. Instead, you can create a device pool, named "Arizona," that configures the correct time zone, language, and MOH, and you can make a single assignment of the Arizona device pool to each IP Phone.

Complete these steps to create the device pool: 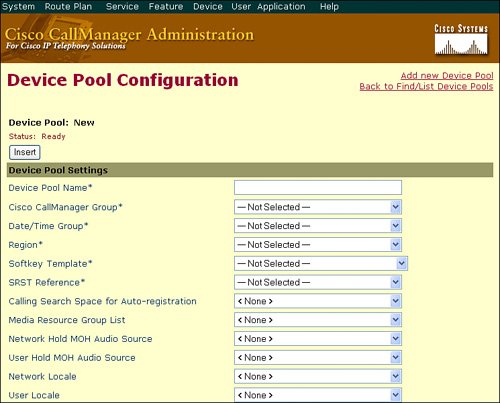 You can configure many options through a device pool. Some of these options are shown here; others are fully explained later in the book. Table 5-1 provides a quick reference for each of the configuration options in the device pool.

If you make changes to a device pool, you must reset the devices in that device pool before the changes will take effect.

Individual components of a device pool are explored in the following subtopics.

Complete these steps to configure a Cisco CallManager group: 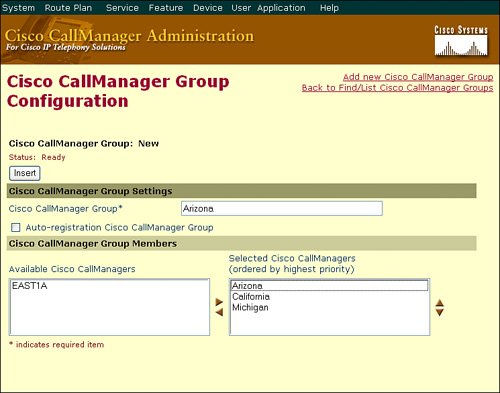 Date/time groups define time zones for the various devices that are connected to Cisco CallManager. You can assign each device to only one device pool. As a result, the device has only one date/time group.

Complete these steps to configure the date/time group:

Figure 5-4 illustrates the addition of a California date/time group. 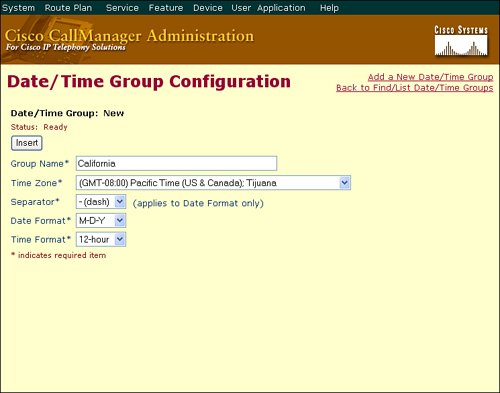 For a worldwide distribution of Cisco IP Phones, you will want to create one named date/time group for each of the time zones where you have deployed Cisco IP Phones.

The region is typically the most confusing item of the device pool configuration. When you create a region, you specify the audio codec that can be used for calls between devices (such as IP Phones) within that region and between that region and other regions. As of Cisco CallManager Release 4.0, you can also specify the video call bandwidth.

You can create regions to modify the codec selection for any reason; however, most network administrators create regions based on geographical areas. The default voice codec for all calls through Cisco CallManager is G.711. If you do not plan to use any other voice codec, you do not need to use regions. The system will use the default region. 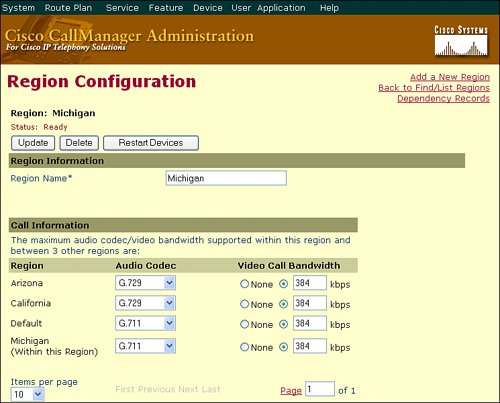 Complete these steps to configure a region:

The Softkey Template Configuration window allows the administrator to manage the on-screen softkeys that the Cisco IP Phones support (such as the Cisco IP Phone 7960 and 7940 models). Softkeys govern functionality such as Hold, Conference, Transfer, and so on. You can configure these softkeys with many Cisco CallManager functions and features. You can also use the softkey templates to restrict what features the user can access. For example, if you do not want the user to have the ability to initiate conference calls, you can just remove the conference button from their softkey template.

To access the Softkey Template Configuration window, open the Cisco CallManager Administration window and choose Device > Device Settings > Softkey Templates. Cisco CallManager comes with a few default softkey templates shown in Figure 5-6, which are discussed fully in future chapters. You cannot modify or delete these default templates; however, you can make copies of them for your own use by clicking the Copy icon located to the right of the template name. 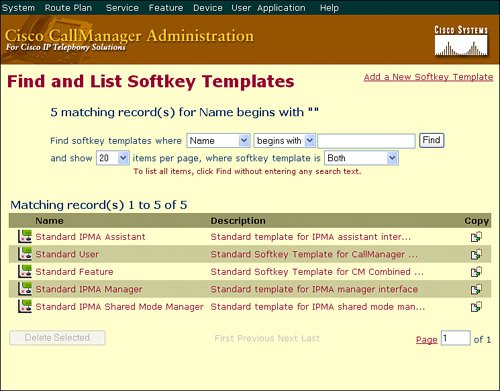 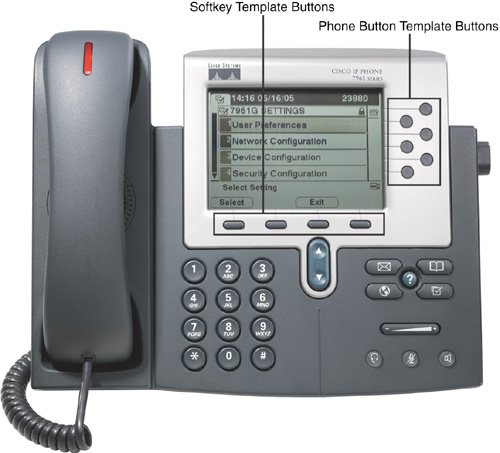 You must assign at least one line per IP Phone; usually this line is button 1. Depending on the Cisco IP Phone model, you can assign additional lines. 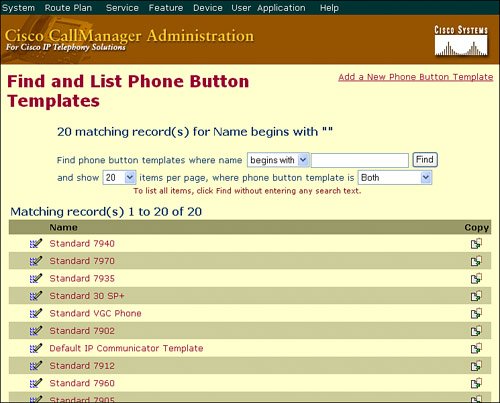 There are additional methods to add speed dial capabilities to a Cisco IP Phone; you are not limited to just the phone button template buttons. These mechanisms are discussed in future chapters.

As with the softkey templates, you are unable to modify the default phone button templates. Rather, you can make copies of the default templates (by clicking on the Copy icon) and saving them under a unique name.

The previous sections discussed creating the mandatory, minimum elements to assemble a device pool. After you have created all the individual elements you need, create device pools that group the common configuration elements together. For example, you might have the following device pool configuration: