A typical video call consists of two media channels: one for the video stream and one for the audio stream. These channels are referred to as logical channels in the H.323 protocol, and each logical channel is negotiated separately. For the call to succeed, Cisco CallManager checks that audio is successfully signaled; if video cannot be negotiated, the call will be an audio-only call. The audio channel consists of the actual audio bit rate. This bit rate is dictated by the audio codec in use. In the case of a G.711 codec, the bit rate is 64 kbps, whereas in the case of a G.729 codec, it is 8 kbps. For an audio channel, only the pure audio data is considered, not the packetization overhead.

None of these values include packetization overhead.

The two main factors that influence bandwidth requirements for video calls are the media channels and the bandwidth used per call.

To calculate the exact overhead ratio for video, it is recommended that you add about 20 percent to the video call speed regardless of which type of Layer 2 medium the packets are traversing. The additional 20 percent gives plenty of headroom to allow for the differences among Ethernet, ATM, Frame Relay, PPP, High-Level Data Link Control (HDLC), and other transport protocols and also some cushion for the bursty nature of video traffic. Keep in mind that the amount of bandwidth consumed by the video correlates directly to the amount of movement on the video. Video streams with constant motion of the person speaking and the background (such as speaking in front of an ocean backdrop) can potentially double the amount of bandwidth required. The 20 percent rule is a general guide, but your actual results might vary.

Table 28-4 shows the recommended bandwidth values to use for some of the more popular video call speeds, incorporating this 20 percent margin. 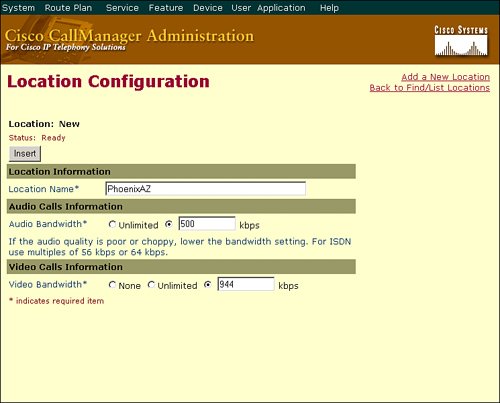 For video calls, the negotiated bandwidth for a video-enabled device typically includes both audio and video; for example, a 384-kbps video call comprises 64-kbps audio and 320-kbps video channels. For voice-only calls, the region uses the same setting that is used for the audio channel in video calls. The negotiated bandwidth for an IP telephony device includes the "real" audio bandwidth including IP overhead; for example, a G.711 64-kbps audio call uses 80 kbps, and this value has to be entered in the Cisco CallManager location configuration.