In addition to antivirus protection, you must protect the operating system against other threats from the network, such as DoS attacks. For these issues, Cisco provides Cisco Security Agent software to install on every Cisco CallManager system. The Cisco Security Agent implements the host-based intrusion prevention system (HIPS), which provides an additional layer of protection against known and unknown attacks. At the same time, CSA provides security services not offered by the host operating system. Examples of these services are personal firewall protection, software keylogger detection, and abnormal application behavior protection.

The rationale behind the behavioral approach is that although the number of methods and exploits to attack a system is extremely large, the number of possible consequences of these attacks is relatively small. For example, a web server can be persuaded by the attacker to execute a local file or an executable attachment in an e-mail attempting to access the Windows Registry. CSA can recognize application behavior leading to or following an attack and prevent the malicious actions. This ability is also why CSA does not require constant updates; its policies need to be updated only if a completely different class of attacks is created, which is relatively rare.

CSA for IP telephony servers is available in two versions:

The headless agent is also commonly referred to as the standalone CSA agent on the Cisco website.

Cisco offers a free, predefined policy for the CSA Managed Agent that deploys the same CallManager security standards as the standalone CSA.

The managed agent should be used in environments where centralized reporting is required, where servers do not use a typical configuration (for example, with nondefault TCP or UDP ports) or have special application requirements (for example, custom systems management software), or where the default policies need to be augmented with site-specific protection requirements.

Deployment of the managed agent also allows the use of CSA Profiler, an expert add-on tool that can, to a large extent, automate generation of custom application policies. This add-on would allow an expert CSA administrator to further enhance the built-in policies and confine every IP telephony application to a sandbox, similar to the functions that the built-in Restrictive MS IIS Module and Restrictive MS SQL Server Module provide for those two applications.

The CSA Profiler must be purchased separately, but it does not require any other software to be installed on the profiled servers.

CSA is available for Cisco CallManager Release 3.2(3), 3.3, and later. To use CSA for another Cisco IP telephony application, check the CSA administration manual to determine whether Cisco supports CSA for that particular application.

This is a list of software add-ons that are supported with CSA on the same server:

In addition to these basic rules, many other rule modules constitute the total CSA protection policy of a system.

At the minimum, for each server, deploy the headless CSA, as shown in Figure 20-5. The built-in operating system protection policies are sound and generally do not require tuning for enhanced protection, except where dictated by the site policy. 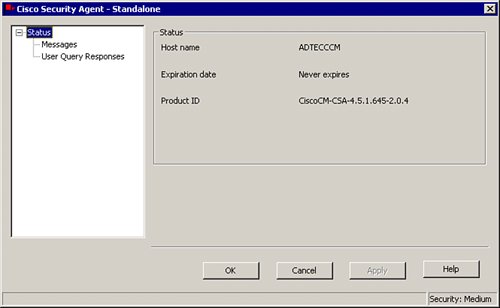 So-called "false positives," events that are erroneously classified as attacks, are very likely when using unsupported server add-ons, such as system management and unsupported antivirus software. To eliminate this erroneous behavior, deploy the managed agent and add the requested permissions for these applications so that CSA will not consider them to be malicious.

CSA also provides personal firewall functions by restricting network connections to the server. The headless agent has a fixed policy that allows all inbound connections to the server, and this cannot be changed. If you want to use CSA to control network connectivity to the server, you have to use the managed agent. Alternatively, you could use native Windows IP security filtering or rely solely on packet filtering by network devices, such as routers or firewalls.