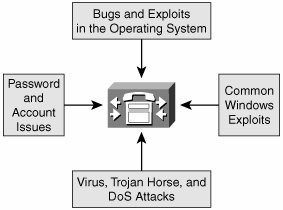 Microsoft Windows, as the most popular operating system, is well-known to the public. As a result, many known issues are related to its password policies as well as vulnerabilities in the operating system default settings. An attacker might try to log in to the operating system using the Administrator account with commonly used passwords. In Microsoft networking, File and Print Sharing services can be used (and might have been turned on by default in some versions of Windows) to allow access to file shares without any security checking.

Another threat to the system is malicious code execution by viruses, worms, or Trojan horses. Protection against these threats consists of blocking the threats from the system and detecting and eliminating attacks that were not blocked.

Finally and extremely important is the fact that server-operating systems are vulnerable to denial of service (DoS) attacks. If the server operating system cannot resist DoS attacks, an attacker can tear down the whole IP telephony infrastructure with a single, focused attack against Cisco CallManager nodes. Besides other methods (separating the server network from other parts of the network and establishing access control), the server itself should be hardened to resist at least simple and common DoS attacks.

The following are practices to reduce possible vulnerabilities: