The integrated Music on Hold (MoH) feature provides On-Net and Off-Net users with on hold music from a streaming source. The MoH feature has two hold types:

MoH is customizable so that it plays specific recordings, based on the DN that is used to place the caller on hold or the line number that the caller has dialed. Recorded audio or a live audio stream can be configured as audio sources.

The MoH feature requires the use of a server that is part of a Cisco CallManager cluster. You can configure the MoH server in either of the following ways:

Table 15-7 provides details on the number of MoH sessions and codecs that are supported for each server platform.

The maximum session limits apply to unicast, multicast, or simultaneous unicast and multicast sessions. The limits represent the recommended maximum sessions that a platform can support.

Figure 15-6 shows the interactions among the audio translator, default MoH TFTP server, and MoH server. The large boxes in the figure represent cluster components that might reside on a single server or on three separate servers. This figure also shows how the MoH server processes the added audio source file. 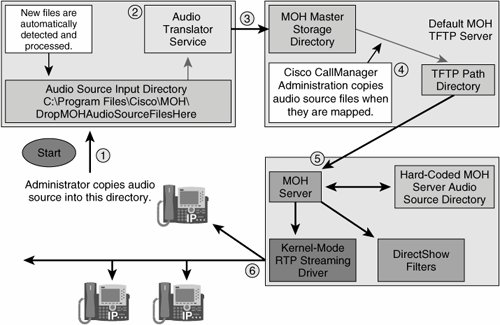 In creating an audio source, the following sequence takes place, as shown in the figure:

It takes approximately 30 seconds to convert a 3-MB MP3 file.

It is not recommended that the audio translator service be used during production hours because the service will consume 100 percent of the CPU.

The Cisco CallManager MoH Configuration is a six-step process:

C:Program FilesCiscoMoHDropMoHAudioSourceFilesHere, on a per-service basis.

The output directory, a clusterwide parameter, contains a Universal Naming Convention (UNC) name to a shared directory on the default MoH TFTP directory. For whichever directory is specified, append MoH.

To display the Service Parameters Configuration window, choose Service > Service Parameters in Cisco CallManager Administration, choose the server that will provide MoH (typically, the publisher if not a standalone server), and choose Cisco MoH Audio Translator for the service. Figure 15-7 illustrates this configuration. 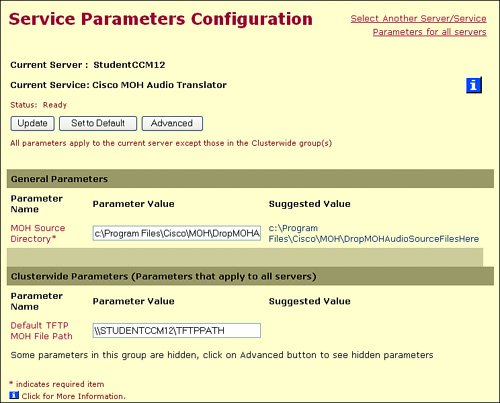 Converting the audio source files into audio codec format can cause massive processor utilization on the CallManager server, potentially keeping it at 100 percent utilization for a short time (depending on the size and number of audio source files you copy). Cisco highly recommends doing this conversion during network off-hours.

Be sure to copy the MoH audio source files into the drop directory. If you move the files (by dragging and dropping them from a source on the same hard disk partition, such as the desktop), the files retain their original permissions rather than inheriting the permissions of the parent directory. If the permissions are not set correctly, the CallManager will not be able to convert the audio files. 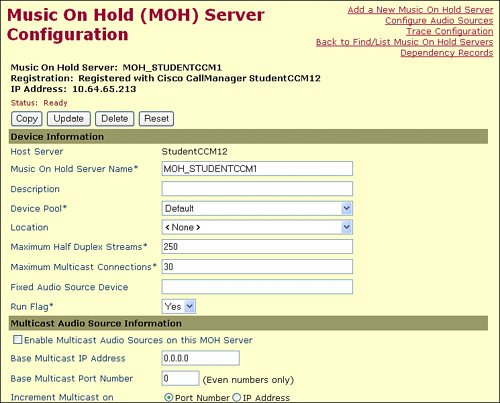 Unicast MoH, the system default, uses a separate source stream for each user or connection. Users connect to a specific device or stream. If your network supports multicast traffic, you can deploy MoH services much more efficiently. Cisco recommends using a locally scoped multicast address (239.x.x.x) to ensure MoH multicast traffic does not stream over the IP WAN unnecessarily.

The next step in configuring MoH is to add and configure the audio source files that the CallManager has converted (by adding .wav or .mp3 files to the directory shown in Step 1) to audio source IDs. Choose Service > Media Resource > Music On Hold Audio Source to display the Music On Hold (MoH) Audio Source Configuration window, shown in Figure 15-9. 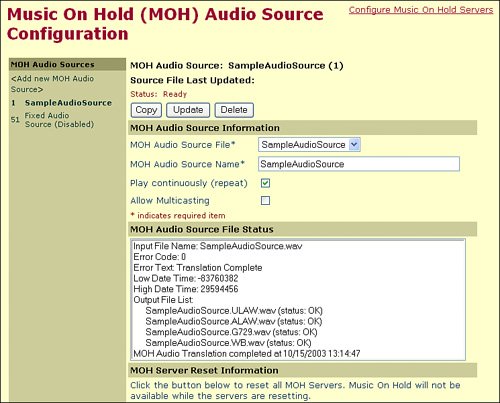 To add audio source files, click the Add New MoH Audio Source link, choose an MoH Audio Stream Number unique in the cluster (numbers range from 1 to 50), assign the MoH Audio Source File to the number, and click Insert. The Play Continuously (Repeat) check box should always be checked to ensure music loops when the end of the file is reached. If multicast capabilities are necessary, you must check the Allow Multicasting check box. If the Play Continuously (Repeat) and Allow Multicasting check boxes are both unchecked, the audio file stops playing when it reaches the end and the network administrator must stop and start the server to reset the MoH server.

The MoH Audio Source File Status window shows the conversion status and indicates whether the audio file translated correctly or had errors. 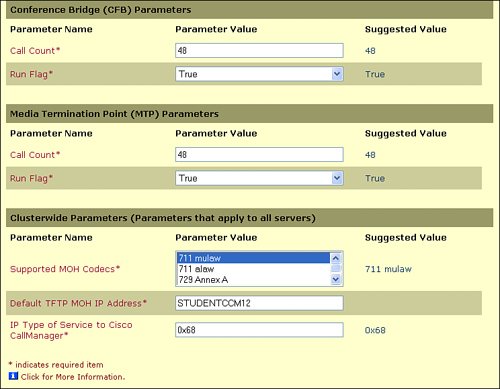 The Supported MoH Codecs field is set to the codecs that are supported by the MoH servers in the cluster. This field defaults to G.711 mu-law during the installation. You can enable multiple codecs by pressing the Ctrl key while selecting the codecs.

The Default TFTPMOH IP Address field is set to the IP address or computer name of the default MoH TFTP server.

Compressed codecs (such as G.729) are designed to handle Latin-based speech patterns. Music on hold audio does not translate well through codecs of this nature and the degradation in music quality is very perceptible.

One of your options for MoH is a fixed music source (attached via a sound card). This could be an external CD player, jukebox, iPod, or any device that can connect through the Line In or Microphone port of your sound card. You will need the exact name (case sensitive) of the fixed audio source device to complete the fixed audio source configuration in Cisco CallManager.

CallManager MCS servers do not ship with sound cards. A list of supported sound cards can be found in the CallManager SRND available at http://www.cisco.com/go/srnd.

To find the name of the fixed audio source, open Control Panel and choose Sounds and Multimedia. Choose the Audio tab. You can use any sound-recording device name that appears in the Preferred Device menu, shown in Figure 15-11. In addition, be sure to open the Recording Control window, and click the Volume button in the Sound Recoding area. Verify that the Line In, Microphone, or CD Audio check box is checked and the volume has been adjusted to an appropriate level (this might require some testing in your IPT environment). 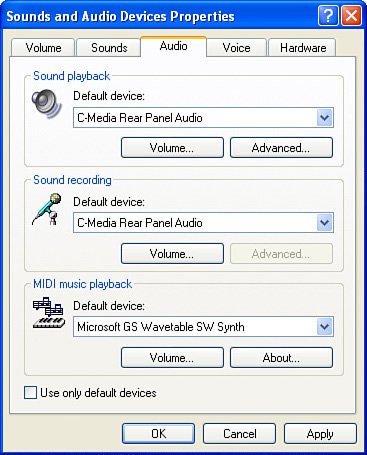 To allow Cisco CallManager to use the fixed audio source, you must link the CallManager configuration with the Windows sound device. After you have located the sound-recording device name that appears in the Windows Control Panel, you must open the Audio Source File Configuration window (by choosing Service > Media Resource > Music On Hold Audio Source) and select the Fixed Audio Source (this will always be audio source ID 51). The window shown in Figure 15-12 appears. 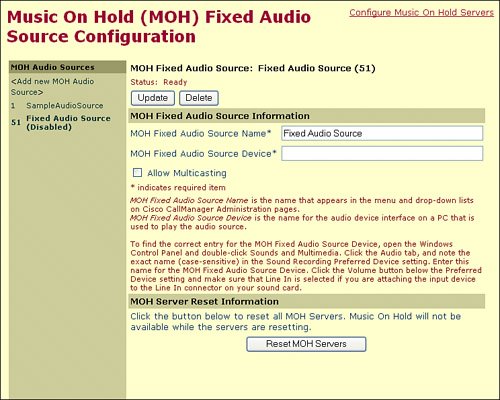 The MoH Fixed Audio Source Device name is case sensitive and must be entered exactly as it appears in the Sounds and Multimedia Properties window, including any spaces or symbols that appear in the name. If the Allow Multicasting check box is checked, and the G.729 codec is enabled, 5 to 7 percent of the CPU resources will be consumed. This setting is global for all MoH servers. If the fixed audio source does not exist on a server, it cannot be used.

The Fixed Audio Source option affects all of the MoH servers that have an MoH fixed audio source device by the selected name.

The FCC considers music on hold a type of broadcasting. Copyrighted music must be licensed for prerecorded and live audio sources. Failure to comply with this law can result in significant fines. 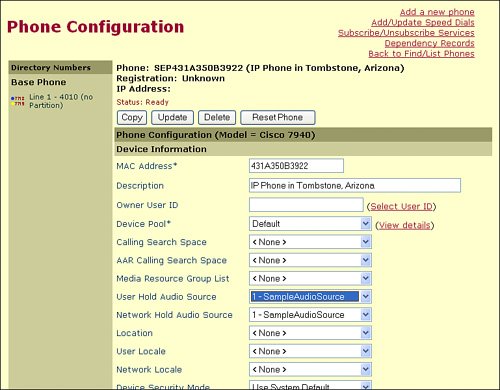