Because an application might provide a variety of different ways for the user to issue the same command (e.g., menus, toolbar buttons, keyboard shortcuts), encapsulating each command as an action helps to ensure consistent, synchronized behavior across the application. QAction is, therefore, an ideal base class for implementing the Command pattern.

In Qt GUI applications, actions are typically "triggered" in one of the following ways:

There are several overloaded forms of QMenu::addAction(). We will use the version inherited from QWidget, addAction(QAction*) in Example 11.19. Here we see how to add actions to menus, action groups, and toolbars. We start by deriving a class from QMainWindow and equipping it with several QAction members plus a QActionGroup and a QToolBar.

The constructor for this class sets up the menus and installs them in the QMenuBar that is already part of the base class. (See Example 11.20.)

It is possible to connect individual QAction triggered() signals to individual slots. It is also possible to group related QActions together in a QActionGroup, as we have just done. QActionGroup offers a single signal triggered(QAction*), which makes it possible to handle the group of actions in a uniform way.

After being created, each QAction is added to three other objects (via addAction()):

To make this example a bit more interesting, we established some logical dependencies between the menu choices so that they were consistent with the plot of the various movies. This logic is expressed in the actionEvent() function. (See Example 11.22).

Because all actions are in a QActionGroup, a single triggered(QAction*) signal can be connected to the actionEvent() slot.

The client code in Example 11.23 shows how the program starts.

Here is a screenshot of the running program. 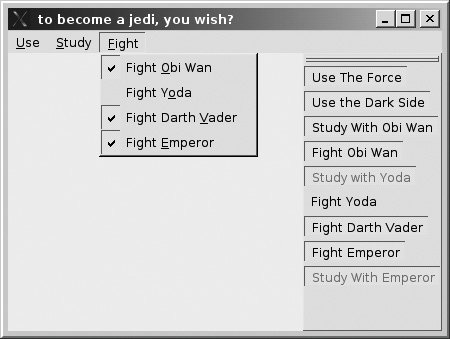 All menu choices except one are initially disabled. As the user selects from the available choices, other options become enabled or disabled. Also, notice that the there is consistency between the buttons and the choices in the menus. Clicking on an enabled button causes the corresponding menu item to be checked. QAction stores the state (enabled/checked), and the QMenu and QToolBar provide views of the QAction.

Write a blackjack game, with the following actions:

These actions and the rules of the game are explained below.

When the game starts, the user and the dealer are each dealt a "hand" of cards. Each hand initially consists of two cards. The user plays her hand first by deciding to add cards to her hand with the "Hit me" action zero or more times. Each Hit adds one card to her hand. The user signals that she wants no more cards with the "Stay" action. 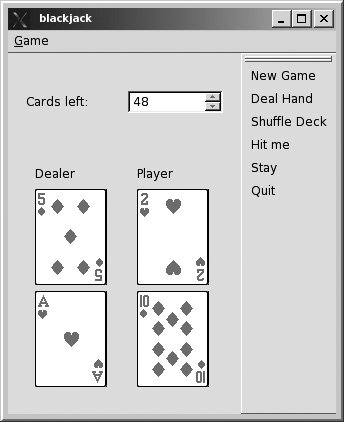 If a player gets five cards in her hand with a total that is not greater than 21, then that player wins the hand.

After the user either wins, loses, or Stays, the dealer can take as many hits as necessary to obtain a point total greater than 18. When that state is reached the dealer must Stay and the hand is finished. The player whose score is closer to, but not greater than, 21 wins. If the two scores are equal, the dealer wins.

After the user selects "Deal hand", that choice should be disabled until the hand is finished.

Keep track of the number of games won by the dealer and by the user, starting with zero for each player, by adding one point to the total for the winner of each hand. Display these totals above the cards.

Deal more cards without resetting the deck until the deck becomes empty or the user chooses "Shuffle deck". Try to reuse or extend the CardDeck and related classes that you developed earlier in Section 10.3. Add a graphical representation to your game by showing a QLabel with a QPixMap for each card, as was done in Chapter 11.

Provide a pull-down menu and a toolbar for each of the QActions. Make sure that Hit and Stay are only enabled after the game has started.

Show how many cards are left in the deck in a read only QSpinBox at the top of the window.

New game should zero the games won totals and reset the deck. 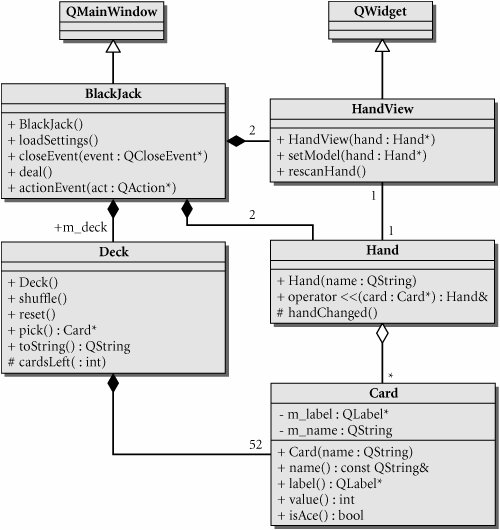 Figure 11.10 is only a starting point. You need to decide on the base class(es) to extend for defining the model classes, as well as which containers to reuse.

To modify the UML diagram you can try loading the diagram file, cardgame.xmi, into umbrello.