Large objects, or objects with expensive copy constructors, should not be passed by value because the creation of temporary copies consumes time, machine cycles, and memory needlessly. In C, we passed objects by pointer to avoid copying them. However, using pointers requires a different syntax from using regular variables. Further, accidental misuse of pointers can cause data corruption, leading to runtime errors that can be very difficult to find and fix. In C++ (and C99), we can pass by reference, which offers the same performance as a pointer-pass. With objects, this permits use of the (.) operator for accessing members.

A reference parameter is simply a parameter that is an alias for something else. To declare a parameter to be a reference, put the ampersand character (&) between the type name and the parameter name.

There are extra output statements in Example 5.13 to help keep track of the addresses of the important variables. 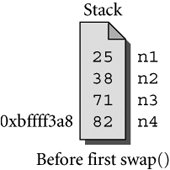 As the program proceeds, we will see output like this:

When references get passed to functions, the values that get pushed onto the stack are addresses, not values. Under the covers, pass-by-reference is very much like pass-by-pointer. Our stack now might look like Figure 5.2:

When you have a choice, it is generally preferable to use references instead of pointers because this can reduce the number of places where a programmer can accidentally corrupt memory. It is only when you need to manage objects (creation, destruction, adding to a managed container) that you need to operate on pointers, and those routines can usually be encapsulated as member functions.